Back on February 10, when looking at Carl Icahn’s darling Chesapeake, whose stock had plunged to effectively record lows on imminent bankruptcy concerns, we said that for anyone brave enough to take the plunge, the “Trade of the Year” would be to go long a specific bond, the $500 million in 3.25s of March 2016 which were maturing in just over a month, and which on February 10 were yielding 300% at a price of 80.5 cents on the dollar.

And then, just two days later, in an unexpected turn, Chesapeake announced that contrary to public opinion, the troubled energy giant “is planning to pay $500 million of debt maturing in March, using a combination of cash on hand and other liquidity that may include its credit line, according to a person with knowledge of the matter.” The issue referenced was precisely the bond that was our “trade of the year.”

To be sure, the bond promptly surged, even as the stock priced tumbled, on what was seen as a very bondholder-friendly action (and thus to the detriment of shareholders) and hit a price of 95 cents while the stock tumbled by 15%, generating a 30% return for anyone who had decided to go along. At that moment we urged anyone in the trade to take their profits and go home, taking a few weeks, or the rest of 2016, off.

A quick update since then shows that those same bonds are currently trading effectively at par (99.25 cents)… 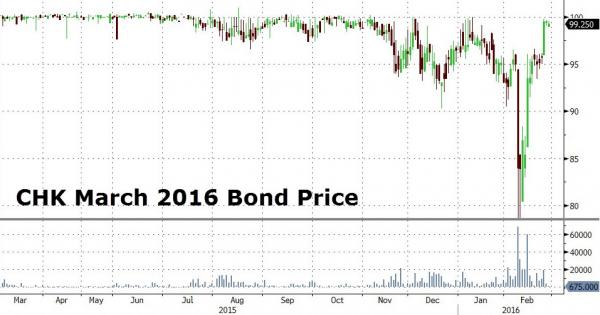 … suggesting that the risk of a near-term Chesapeake bankruptcy may be gone for now.

But is it truly off the table?

Sadly, we think that despite the brief hiccup in optimism, CHK’s troubles are about to get worse, even if this particular bond is ultimately repaid, for one simple reason: in its 10-K filed yesterday, Chesapeake announced that it has just reached its own “AIG moment.”

Recall that one of the reasons for AIG’s unprecedented, and rapid collapse, was a series of collateral calls resulting from a series of downgrades of the insurer, which forced it to post increasing amounts of collateral to which it had no access, and which in turn activated a liquidity death spiral which ultimately culminated with its bailout by the US Treasury.

The same is now taking place at Chesapeake, as the company’s 10-K has just confirmed:

Some of our counterparties have requested or required us to post collateral as financial assurance of our performance under certain contractual arrangements, such as transportation, gathering, processing and hedging agreements. As of February 24, 2016, we have received requests to post approximately $220 million in collateral, of which we have posted approximately $92 million. We have posted the required collateral, primarily in the form of letters of credit and cash, or are otherwise complying with these contractual requests for collateral. We may be requested or required by other counterparties to post additional collateral in an aggregate amount of approximately $698 million (excluding the supersedeas bond with respect to the 2019 Notes litigation discussed in Note 3 of the notes to our consolidated financial statements included in Item 8 of this report), which may be in the form of additional letters of credit, cash or other acceptable collateral. Any posting of collateral consisting of cash or letters of credit, which would reduce availability under our credit facility, will negatively impact our liquidity.

With this warning, energy giant Chesapeake has effectively warned that it may be the the energy-collapse’s AIG: a company which was teetering on the edge, until the rating agencies came along and with their downgrades, sprung an ever escalating series of collateral calls.

Furthermore, we now know roughly what the company’s liquidity state is: it has so far been able to post collateral on less than half, or $92 million, of its total inbound collateral calls amounting to $220 million. Worse, the company may at any moment face up to an additional $698 million or just under $1 billion in collateral calls.

Putting this in context, it took an unprecedented scramble by CHK in the last few weeks to free up precious liquidity and sell assets to just make the upcoming $500 million bond payment. In the meantime, CHK is already facing a collateral  defficiency of $128 million, one which can grow by $698 million, or more in the coming weeks, if further credit downgrades materialize.

And, adding insult to injury, is that the price of nat gas, Chesapeake’s bread and butter, just hit a 16 year low which suggests even greater cash burn for the company. 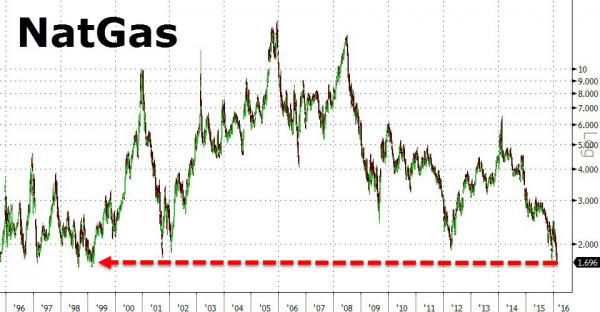 All of which explains our eagerness to get out of the “trade of the year” when we had the chance. Because considering these latest developments and this surge in collateral calls, if we had to speculate what the next direction for the company’s asset prices would be, the answer – absent a dramatic surge in the price of nat gas – is sharply lower.