Volatility in the Chicago PMI likely has economists scratching their heads. Following last month’s surge comes this month’s contraction. It’s been off and on for 10 months. No swing in either direction has lasted more than two months.

Yet, the overall trend has been weakening for a year and economists this month’s forecast by a mile. The Econoday Consensus estimate was for a reading of +54.0 in a range of 52.8  to 56.5. The actual reading was 48.7.

Volatility is what to expect from the Chicago PMI which, at 48.7, is back in contraction in November after surging into solid expansion at 56.2 in October. Up and down and up and down is the pattern with prior readings at 48.7 in September (the same as November) and 54.4 in August.

New orders are down sharply and are back in contraction while backlog orders are in a 10th month of contraction. Production soared nearly 20 points in October but reversed most of the gain in November. Despite November’s weakness, employment is up slightly. Prices paid is in contraction for a fourth straight month.

Though this report points to November weakness for the whole of the Chicago economy, the volatility of the report should limit its impact on the month’s outlook. 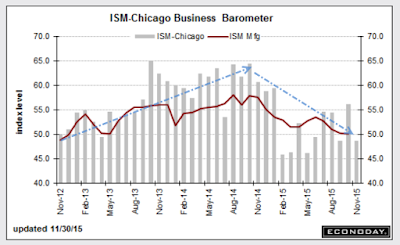 Something clearly changed in February, and it wasn’t the weather.

The Chicago PMI survey includes both manufacturing and non-manufacturing components so it is not directly comparable to pure manufacturing surveys. That makes matters worse actually, given economists generally consider the service economy to be in good shape.

Bloomberg proposes the volatility of the report should limit its impact on the month’s outlook.
I suggest volatility is a sign of a trend change as well as underlying weakness. And the backlog of orders, one place where there has been consistent contraction for 10 months, does not bode well for future hiring needs.

All things considered, the Chicago PMI is a warning that the service economy may be on its last legs.