By Ambrose Evans-Pritchard at The Telegraph UK

China is perilously close to a devaluation crisis as the yuan threatens to break through the floor of its currency basket, despite massive intervention by the central bank to defend the exchange rate.

The country burned through at least $120bn of foreign reserves in December, twice the previous record, the clearest evidence to date that capital outflows have reached systemic proportions.

“There is certainly a sense that the situation is spiraling out of control,” said Mark Williams, from Capital Economics.

Mr Williams said the authorities botched a switch in early December from a dollar currency peg to a trade-weighted exchange basket, accidentally setting off an exodus of money. Skittish markets suspected – probably wrongly – that it was camouflage for devaluation. The central bank is now struggling to pick up the pieces.

Global markets are acutely sensitive to any sign that China might be forced to abandon its defence of the yuan, with conspiracy theories rampant that it is gearing up for currency war in a beggar-thy-neighbour push for export share. 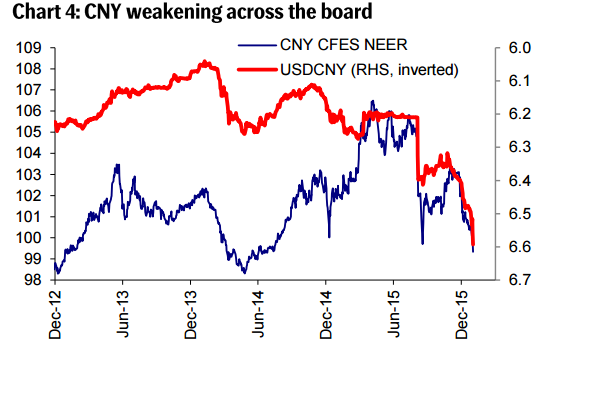 Any such move would send a powerful deflationary impulse though a world economy already on its knees, and risk setting off a chain-reaction through Asia, replicating the 1998 crisis on a larger and more dangerous scale.

The confused signals coming from Beijing sent Brent crude crashing to an 11-year low of $32.20. They have also set off a parallel drama on China’s equity markets.

The authorities shut the main exchange after the Shanghai Composite index plunged 7.3pc in less than half an hour, triggering automatic circuit-breakers. The crash wiped out $635bn of market capitalisation in minutes.

It was triggered by a witches’ brew of worries: a fall in China’s PMI composite index for manufacturing and services below the boom-bust line of 50, combined with angst over an avalanche of selling by company insiders as the deadline neared for an end to the share-sales ban imposed last year.

Faced with mayhem, regulators have retreated yet again. They have extended the ban, this time prohibiting shareholders from selling more than 1pc of the total float over a three-month period. The China Securities Regulatory Commission said the move was to “defuse panic emotions”.

The freeze on sales is an admission that the government is now trapped, forced to keep equities on life-support to stop the market crumbling. The commission said its “national team” would keep buying stocks if necessary, doubling down on its frantic buying spree to rescue the market last year. 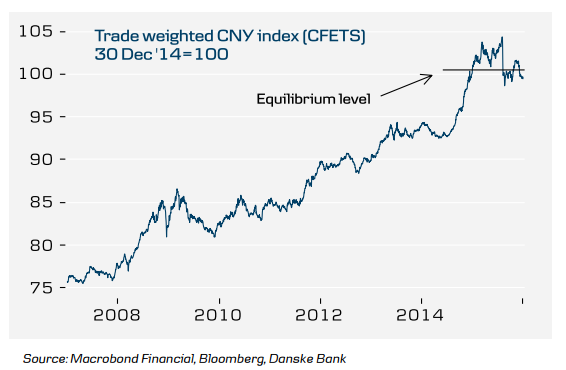 Turmoil on the Shanghai “casino” has little bearing on the Chinese economy itself, which has been moving to an entirely different rythm for years. Few companies raise capital on the stock market. A large chunk of the shares are owned by state entities, and are not traded.

The currency ructions are more serious. What is worrying is that the central bank has so far failed to stop the yuan sliding despite spending an estimated $140bn last month in the foreign exchange markets.

Last month’s switch to the currency basket (CFETS) was a belated move to liberate China from the rising dollar as the US Federal Reserve tightens policy. The view in Beijing is that the yuan is now fairly valued after soaring since mid-2012. 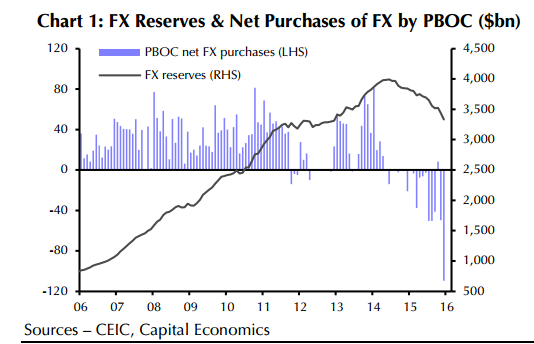 Premier Li Keqiang vowed to keep the basket rate “basically stable”, yet it has been dropping for three weeks. It is now hovering near a 16-month low. The spreads on offshore yuan contracts in Hong Kong have ballooned, a sign that traders are expecting worse to come. Events are coming to a head fast.

The central bank (PBOC) pinned its colours to the mast, insisting that it has the firepower to defeat “speculative forces” and keep the currency stable at a “reasonable equilibrium level”.

It said the market gyrations had decoupled from the real economy and that a country running a current account surplus of almost $600bn has no need for a weaker currency. “It is not necessary to stimulate exports and stabilize growth through a competitive devaluation,” it said.

For good measure, the authorities suspended the foreign exchange operations of Standard Chartered and DBS Group Holdings, and cracked down on false invoicing by exporters, effectively invoking police powers to stop money leaking out of the country.

China’s reserves have dwindled from $4 trillion to $3.33 trillion and are no longer far from the $2.6 trillion deemed to be the prudent threshold by the International Monetary Fund, given China’s $1.2 trillion dollar liabilities.

The central bank still has the clout for a shock-and-awe blitz to defend the yuan, but this entails serious costs. Reserve depletion causes monetary tightening, compounding the economic downturn. It is the exact opposite of the boom years when China accumulated reserves, causing the economy to overheat.

It can, in theory, offset this by cutting the reserve requirement ratio for banks (RRR) all the way down from 18pc to 5pc, where it was during the banking crisis in 1998. This would inject $3 trillion of stimulus. Yet to do this would weaken the currency, accelerate the exodus of capital, and trap China in a vicious circle.

George Magnus, from UBS, said Beijing is trying to reconcile impossible objectives. “They don’t want any tightening. They are trying to keep interbank rates as low as possible,” he said.

In economic parlance, it is the Impossible Trinity. No country can have an open capital account, a managed exchange rate and sovereign monetary policy. One must give.

In trade terms, China does not need to devalue, and it would not help much. The trade share of GDP has fallen to 41pc from 65pc a decade ago as the country moves up the economic ladder. Yet it needs internal stimulus to keep a hard-landing at bay, and that cannot easily be achieved if credit policy is kept tight in order to defend the exchange rate. Beijing will have to choose.

Jonathan Anderson, from Emerging Advisors Group in Shanghai, said the latest burst of stimulus – led by an 18pc rise in credit – is clear evidence that Beijing is unwilling to take its medicine and deflate the country’s $27 trillion loan bubble. “The debt ratio is rocketing upwards. China is still adding new leverage at a massive, frenetic pace,” he said.

“The authorities have clearly shown that they have no intention of addressing leverage problems. Our new base case is that the Chinese government will simply let the debt party go on until it eventually collapses under its own weight,” he said. `

Source: Capital Flight Pushes China to the Brink of Devaluation – The Telegraph