In the latest indication of contracting global growth, overnight Hong Kong reported that its Q1 GDP fell off a cliff 0.4% qoq, widly missing estimates of 0.1% growth as retail sales plummeted and the property market continued its collapse. On a y/y basis, the economy grew only 0.8% when compared to the same period last year, less than half the 1.9% y/y growth reflected in Q4. 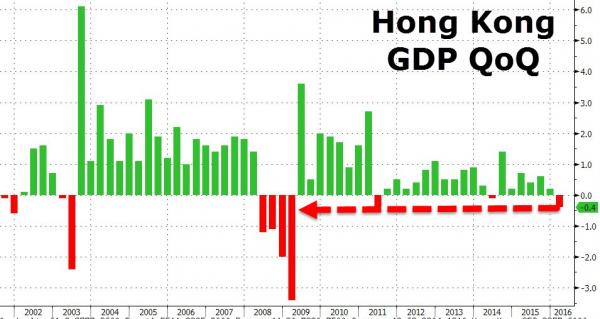 Hong Kong’s economy grew only 2.4% in 2015, half the pace of 2011, as a slowdown in mainland China and a weaker yuan curbed Chinese spending, while a volatile stock market also hit domestic consumption.

“At least over the next five to six months, we don’t see any positive growth driver that can help lift GDP growth substantially,” said Raymond Yeung, an economist at Australia & New Zealand Banking Group Ltd. in Hong Kong.

“Hong Kong’s economy is facing myriad headwinds, including an increasingly acute residential property price correction and significant linkages with the slowing Chinese economy,” said Andrew Wood, head of Asia country risk at BCI research. He added that “while we do not envisage the economy tipping into full-scale recession in 2016, the risks of such an event are rising.”

We, on the other hand, envisage the Hong Kong economy tipping into a recession, as we have since early 2016.

One ddriver for the weakness is that Hong Kong’s tourist arrivals dropped 20.5% in February, and slid 4.3% from a year earlier to 4.21 million in March. Mainland visitors, which accounted for 72 percent of the total, fell 6.9% to 3.02 million, perhaps the best indication of just how pressured the Chinese consumer truly is.

Kelvin Lau, a senior economist at Standard Chartered Bank in Hong Kong, told Reuters that “given its highly open nature, Hong Kong was not insulated from these external headwinds, which weighed on consumer and investor sentiment,” he said.

We noted the epic retail sales collapsed in March, which according to a MasterCard survey contracted 18.5% on a year over year basis, and marked the thirteenth straight month of declines according to Bloomberg.

Regarding the property market, we’ve covered its spectacular collapse in detail, and as Kyle Bass summarizes in explaining the property market’s free fall: “Hong Kong’s in a worse position than it was in prior to the ’97 crisis today.” Apartment prices are down by 12% from a September high and accelerating lower, while investment banks predict a further 20 percent decline in coming months. Property sales tumbled to a 25-year low in February as prices continued to slide. The number of the city’s homeowners with apartments worth less than their mortgages soared 15 times in the first quarter, according to the Hong Kong Monetary Authority. 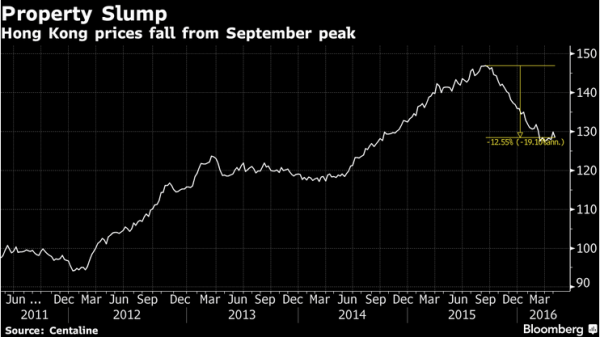 While headlines may read that Hong Kong’s economic contraction was “unexpected”, it was certainly anything but. As we’ve said before, given what we’re seeing in Hong Kong, one can only imagine what the true conditions are in mainland China.