Earlier this week, MNI suggested that according to discussions with bank personnel in China, data on lending for October was likely to come in exceptionally weak. That would mark a reversal from September when the credit impulse looked particularly strong and the numbers topped estimates handily.

“One source familiar with the data said new loans by the Big Four state-owned commercial banks in October plunged to a level that hasn’t been seen for many years,” MNI reported.

Given that, and given what we know about rising NPLs and a lack of demand for credit as the country copes with a troubling excess capacity problem, none of the above should come as a surprise.

Well, the numbers are out and sure enough, they disappointed to the downside. RMB new loans came at just CNY514bn in October – consensus was far higher at CNY800bn. That was down 6.3% Y/Y. Total social financing fell 29% Y/Y to CNY447 billion, down sharply from September’s CNY1.3 trillion print. Here’s Barclays with the breakdown: 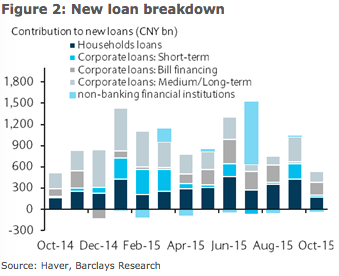 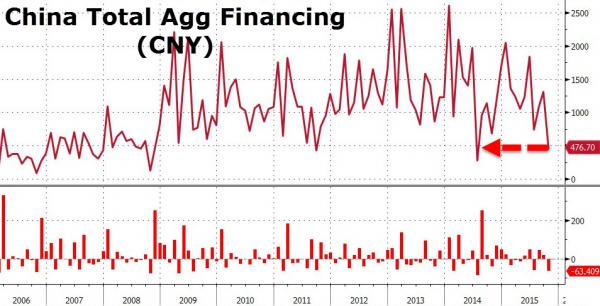 As noted above, this is likely attributable to three factors.

First, banks’ NPLs are far higher than the official numbers, as Beijing’s insistence on forcing banks to roll souring debt and the suspicion that nearly 40% of credit is either carried off the books or classified in such a way that it doesn’t make it into the headline print. Underscoring this is the rising number of defaults China has seen this year. Obviously, you’re going to be reluctant to lend if you know that under the hood, things are going south in a hurry. Here’s Credit Suisse’s Tao Dong, who spoke to Bloomberg: “Banks are still unwilling to lend. This is quite weak, even stripping out the seasonality. The rebound in bank lending, boosted by the PBOC’s injection to the policy banks, has been short lived.”

Second, it’s not clear that demand for loans will be particularly robust for the foreseeable future. The country has an overcapacity problem. In short, companies don’t need to invest and they’re already straining under mountainous debt loads they can’t service. 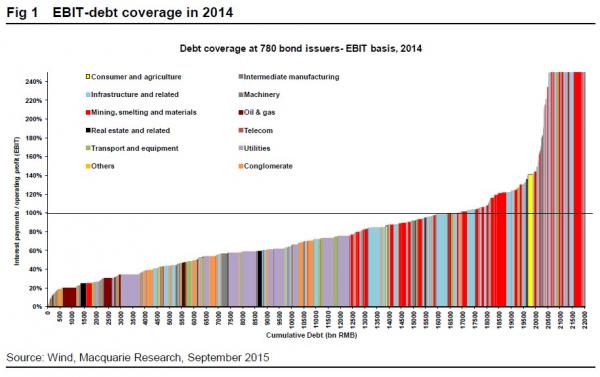 With those two things in mind, consider thirdly that this comes against the backdrop of lackluster economic growth. As Goldman points out, “China is likely to continue to slow credit growth over the medium to long term given credit growth is still running at roughly double the rate of GDP growth.” In short, it’s not clear why anyone should expect these numbers to rebound. Back to Bloomberg:

The “big miss for China’s credit growth in October rings alarm bells about the strength of the economy and significantly increases the chances of continued aggressive easing,” Bloomberg Intelligence economist Tom Orlik wrote in a note. “It lends support to the idea that a combination of falling profits, the high cost of servicing existing borrowing and uncertainty about the outlook has significantly reduced firms’ incentives to borrow and invest. That’s similar to the problem that afflicted Japan during its lost decades.”

So if these kind of numbers continue to emanate from China, expect the calls for fiscal stimulus to get much louder. Indeed consider that fiscal spending soared 36% on the month (via Bloomberg again):

In what looks like an admission that China will be forced to focus on fiscal stimulus going forward now that excess liquidity and rate cuts have proven ineffective in the overleveraged economy, China Daily reports that “an executive meeting of the State Council, presided over by Premier Li Keqiang, decided on Wednesday to issue a package of policies to shore up consumption, one of the driving engines tapped by the government to support economic growth.”

Here’s a look at the surge in October: 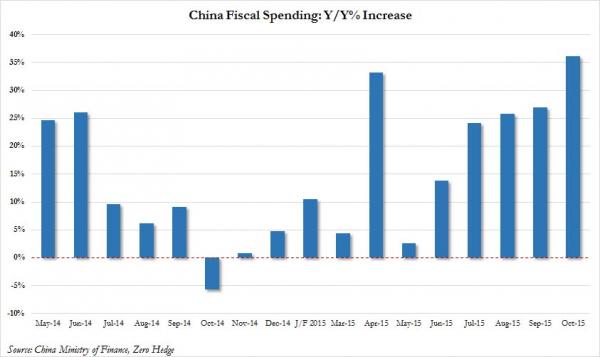 And on that note, we’ll close with the following from Citi’s Willem Buiter:

Fiscal policy can undoubtedly come to the rescue and prevent a recession in China. But what is needed is not another dose of the familiar post-2008 fiscal medicine: heavy-lifting capital expenditure on infrastructure with dubious financial and social returns, and capital expenditure by SOEs that are already struggling with excess capacity, all funded, as if these were commercially viable ventures, through the banking or shadow banking sectors. As regards funding the fiscal stimulus, only the central government has the deep pockets to do this on any significant scale. The first-best would be for the central government to issue bonds to fund this fiscal stimulus and for the PBOC to buy them and either hold them forever or cancel them, with the PBOC monetizing these Treasury bond purchases. Such a ‘helicopter money drop’ is fiscally, financially and macro-economically prudent in current circumstances, with inflation well below target and likely to fall further.