China Syndrome May Return to Suck US Stocks Down

In May and June of 2013, the US stock market had a little shakeout that came to be known as the “Taper Tantrum.” Ben Bernanke had started talking about slowing the rate of the Fed’s purchases of Treasuries and MBS under the Fed’s program of money printing and bond buying called Quantitative Easing (QE). The Fed had been monetizing US debt since 2oo9. That’s when it began regularly buying hundreds of billions of dollars of Treasury and mortgage paper that ultimately drove the size of the Fed’s assets to $2.75 trillion today from $700 billion in 2008. Over that time The Street had slowly but surely reached the consensus that the Fed’s QE had something to do with the bull market in stocks.

I had actually warned that the Fed’s actions could  drive stocks higher under QE soon after the program started in 2009. At the time most seers on Wall Street were pooh poohing the idea. The market wasn’t rallying in 2009-10 because the Fed was pushing money into the market by buying bonds, they said. The market was rallying because fundamentals were improving.

Within the next couple of years that consensus had begun to fade because economic fundamentals stayed pretty lousy while stocks continued to rally in lockstep with the increasing size of the Fed’s asset base. The more bonds the Fed bought, the more stocks rose in price. Whenever the Fed paused its purchases, stocks sold off. Wall Street geniuses began to make the connection that the rally had something to do with the Fed’s wild eyed money printing. Within a couple of years that had become the broadly accepted consensus. The Fed had the market’s back! Woopee!

So it was in May 2013, that Ben Bernanke raised the idea, that maybe, just maybe ,QE would end some day, the market sold off. Bernanke wasn’t even talking about ending the program. He just thought it would be a good idea to slow it down some at some vague future date.

Around the time that Bernanke spoke those thoughts, the stock market had a bit of a shakeout. The pundits immediately concluded that Bernanke’s words had been the cause. As an observer of worldwide liquidity flows at the time, I ridiculed that idea. That was because I knew that something far more important was going on that was causing a liquidity crunch worldwide. China was in the midst of draconian credit crunch imposed by the authorities there. From February to June Chinese stocks fell 20%.

The Chinese government was engaged in one of its occasional attempts to bring the wildly overleveraged, Chinese wealth funds to heel. The government tightened credit, making it all but impossible for those funds to raise desperately needed cash at homes. But these funds were able to sell some of their holdings in other markets around the world, raising the cash needed to meet margin calls at home. That, in my opinion, was the real cause of the selloff in the US in May-June of 2013. When the selling in Chinese shares abated at the end of June, US stocks immediately began to recover from the so called Taper Tantrum.

Subsequent to my call at the time that Chinese selling was the real force behind the “Taper Tantrum,” several mainstream analysts did begin to pick up on that idea. But the dominant narrative myth then. and even today, was that the selling was due to Bernanke’s musings.

By 2014 China had started going pedal to the metal again with monetary stimulus. Their stock market really took off in 2015, going into a massive bubble blowoff that more than doubled prices. Conversely, the Fed finally did end QE in late 2014. While China was in its moon launch, the US market turned sluggish. What happens in China sometimes affects the US markets but it does not drive them. When China is in a monster rally, Chinese investors are perfectly willing to stay home and feed the monster. Not that much capital flees the country. 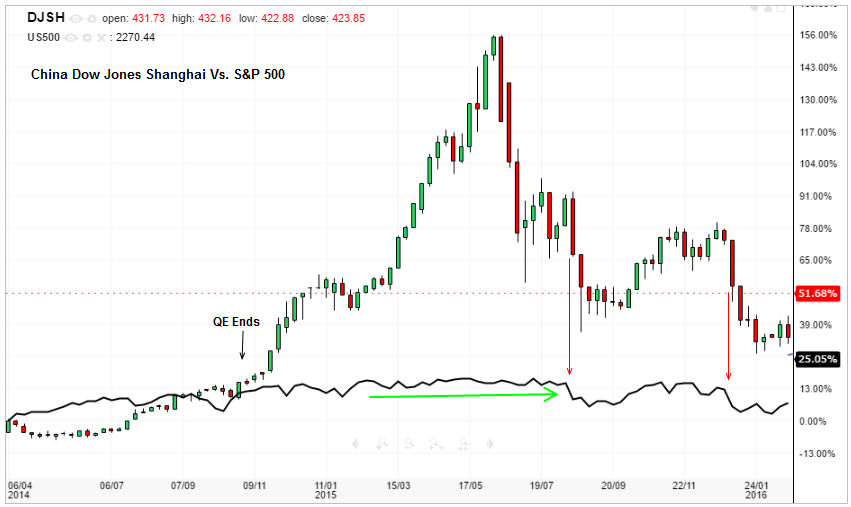 By June 2015 the China blowoff had run its course. That turned into the China syndrome as Chinese stocks collapsed in June. US stocks had peaked in May, about 6 months after the end of Fed QE. But they only consolidated after that. That continued until July, as US stocks even maintained a slight uptrend.

Then in August 2015, all hell seemingly broke loose. At that time many analysts did, correctly, blame China, along with the oil price collapse over the previous year. Crashing oil and commodity prices had destroyed massive amounts of world market liquidity. Margin calls went out, commodities were sold, and the cash was extinguished as it went to pay off margin credit.

Looking at the chart, the Chinese stock bubble crashed in June 2015. But that was mostly a stay at home affair. As the Chinese stock market plunged, the Chinese central bank added liquidity.The panic selling ran its course by the end of June. There was enough liquidity in China itself to absorb the liquidation without it spilling over to the US.

Chinese stocks recovered until August. That’s when a second wave of selling started. At that point, prices had fallen so far in China that Chinese speculative wealth funds needed to raise cash not just in home markets, but around the world. In August 2015, US stock prices plunged as that selling hit Wall Street. The fall in commodities and emerging market stocks had killed off enough money that the US stock market finally succumbed.

Things quieted down for a few months, but Chinese liquidation began again in early January 2016. Again that selling spread to the US, and some US investors joined the wake. US stocks slid in sympathy.

That brings us to the present. Chinese authorities have spent the past couple of years not only printing money, intervening in markets, and jawboning stock prices higher. They have essentially made selling stocks a crime, virtually subject to the death penalty, or at least a jail term. Whether as a result of that, or natural forces of recovery (probably the latter) Chinese stocks have managed a year long recovery that looks puny relative to the preceding crash. But it managed to tack on about 20% from the crash low in early 2016. 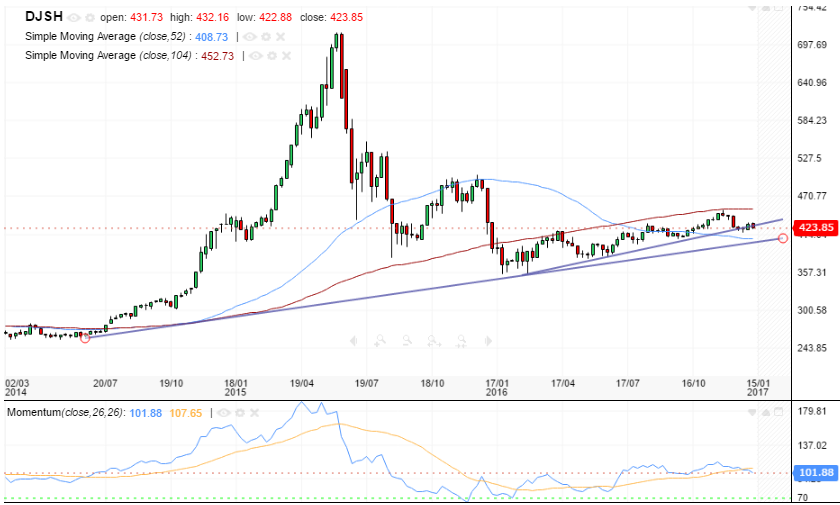 Now that recovery is on the cusp of change. It has pulled back to the one year uptrend line in the past couple of weeks. It has not been able to recover above its 104 week (2 year moving average). Based on the 26 week rate of change (lower graph), the momentum of the recovery has been weak. That momentum is now on the verge of reversing to the downside. That could coincide with a break in the uptrend in prices. Is China getting nervous about the impact of the coming reign of Crazy King Donald over US economic policy? Maybe. He’s been rattling his big swinging economic sabre at the Chinese throughout the campaign and the transition.

Maybe come January 20 China won’t start to sell off again. But maybe it will. We need to keep an eye on this chart. A big enough selloff in China could hit US market liquidity just as it has in the past. It could coincide with a sell the news moment as would be King Donald takes his seat on the throne, shooting random thunderbolt tweets around the world at 3 AM. If one of those 3 AM thunderbolts hits Beijing, a wounded Chinese panda could be a very dangerous animal for Wall Street.