The world let out a collective gasp of shock last night when the PBOC announced that in January, China had created an absolutely gargantuan CNY3.4 trillion in new total debt (Total Social Financing) – or about $520 billion – more than 50% higher than expected, of which CNY2.1 trillion was in the form of new loans.

The breakdown of that massive number is shown in the table below:

What happened? Here is Goldman’s explanation:

January’s credit data was exceedingly strong. Part of the demand for new RMB loans is from demand to borrow RMB and pay down USD debt, though banks may have also started to behave differently amid profit pressures. The temporary suspension of local government bond issuance also directed more borrowing to bank loans and other channels. Strong mortgage loan growth also contributed (household medium to long term loans increased RMB 478.3bn in January, vs RMB 292.4bn in December). The window guidance meeting held by the central bank around mid-January to rein in rapid credit growth apparently did not have much effect on the behavior of commercial banks. (January loan supply tends to be very front-loaded; one would have expected there to be a more significant deceleration of credit supply if the central bank was sending a really tough message, hence market expectations were only RMB 1.9 tn even when they knew it was already RMB1.7 tn in the first half of the month.) The pace of January credit growth is likely above the comfort zone of the central bank. Should the lending continue to be as strong in February, we think it would likely invite more forceful administrative controls.

M2 growth was not quite as strong as credit growth and its sequential growth was just modestly faster than December at a sub-trend level. Fiscal deposit change was more favorable than last January, which was abnormally tight, but still significantly tighter than usual (implying a smaller amount of net spending). FX position changes which affect M2 growth were probably another drag. Judging from FX reserve data, this drag was likely not larger than it was in December though reserve change data is particularly noisy and we cannot be sure about this at the moment.

January broad credit and money data is positive news for domestic demand growth, but the effects on aggregate demand growth are likely to be at least partially cancelled out by very weak exports growth. We still expect sequential activity growth to slow down in Q1 after a meaningful but short rebound in November and December last year. Only after the signs of another round of slowdown become clear would we expect meaningful cyclical loosening measures to be rolled out.

Another hurdle to more policy loosening is the recent abnormally cold weather conditions. These have pushed up food prices to a very high level which means January and February CPI data would likely show a clear upward trend (February CPI is almost surely going to breach 2% and may be close to 3%). We expect this to be a short term phenomenon and CPI is likely to moderate again from March.

But so much for words. Here, courtesy of Simon Rabinovitch, is a chart which puts China’s credit creation just in January in its proper context. If China’s new debt in January were a country, it would be the world’s 27th-biggest economy. 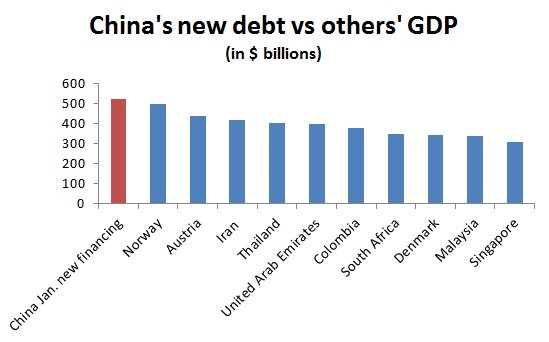 Source: China Created More Debt in January Than the GDP of Norway, Austria Or the UAE – ZeroHedge