Worse than expected is an understatement.

Things are not getting better in China as Exports crashed 25.4% YoY (the 3rd largest drop in history), almost double the 14.5% expectation and Imports tumbled 13.8%, the 16th month of YoY decline – the longest ever. Altogether this sent the trade surplus down to $32.6bn (missing expectations of $51bn) to 11-month lows. 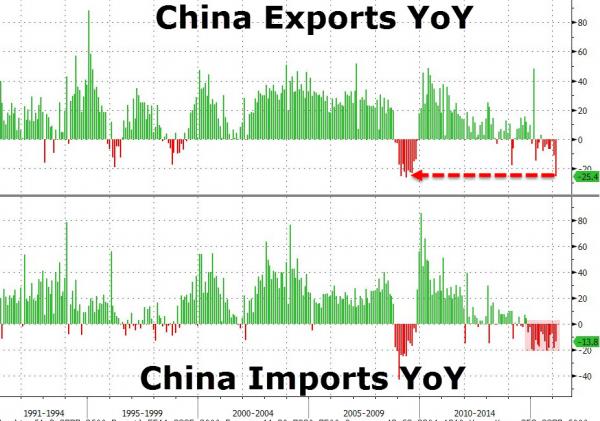 So much for that whole “devalue yourself to export growth” idea… 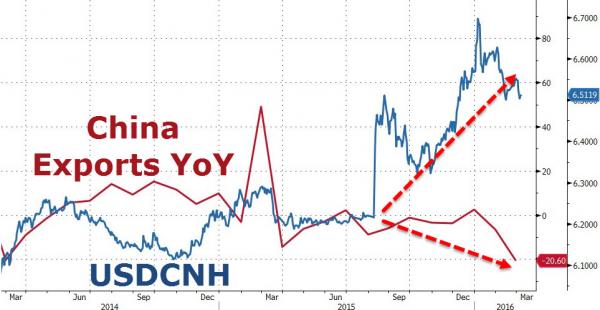 The Chinese New Year holiday, which fell at the start of February in 2016 and in the middle of February in 2015, distorts the data in unpredictable ways. Holiday effects mean the outsize drop in February exports overstates the weakness in China’s factory sector.

Even so, looking at a year-to-date figure for the first two months of the year, the picture is only slightly less gloomy. In the year through February, exports are down 13.1%.

Even Goldman knew it was futile to try to explain the collapse using the tired “Lunar New Year” excuse:

February export growth was much weaker than expected while imports growth was modestly below expectations. Part of the fall in yoy growth was due to Chinese New Year effects. Exporters tend to front load their activities ahead of the festival and often do not resume full output until well after the golden week holiday. These effects occur well before and beyond the golden week holiday around the festival. In 2015, as the festival was very late (February 19th, which is quite late vs. most years), 2015 January data was largely undistorted, February data was distorted on the upside and March on the downside. This year’s festival happened much earlier on February 9th which means January data should be stronger, February weaker, and March stronger. Despite these distortions, January data was very weak which suggested underlying growth momentum was weak as well—an impression confirmed by today’s data. While January-February data is distorted on the downside and March data is likely to show a large yoy improvement, 1Q data as a whole will likely to be on the weak side as such. Weak global growth, an elevated level effective exchange rate, and falling export prices (-6.1% yoy in January, not available yet for February) all played a role in the weakness in our view.

This weakness in exports has likely put significant downward pressures on activity growth, which appears to have been weak since the start of the year, and could have contributed to the decision to ease policy further in recent weeks. Policy easing since late 2015, intensified recently, has likely supported domestic demand growth which in turn boosted import growth. Although import growth was weak, it is not quite as weak as exports growth because a sizable share of it is for domestic demand instead of eventual re-exports. Having said that, the credit loosening in January likely was well beyond the intended magnitude in our view. We believe this led to unrealistically high policy expectations especially in terms of the amount of liquidity supply in February which is likely to be another disappointment (we are forecasting February RMB loans to be Rmb800bn, lower than last February’s Rmb1 tn, while the market consensus is expecting it to be higher than last year’s at Rmb1.2 tn despite adverse seasonality).

Although year-end trade targets are no longer a binding constraint—the NPC declined to issue export targets for 2016–trade data may still be distorted by reporting issues, as capital flows continued to be significantly negative even though the size of flows likely fell in February judging from CNY trading volume and reserve changes. This is especially true for imports, where over-reporting is likely a function of outflows. A further rise in imports growth from HK (to 88.7% yoy) could be an indication of this. The bottom line is that while the import data probably do reflect more stable domestic demand growth, they may nonetheless overstate the strength of domestic demand due to ongoing capital outflow pressures.

As a reminder, China’s policy response has already been announced. The National People’s Congress set a target for 13% growth in money supply in 2016, up from 12% in 2015, and a 3% of GDP fiscal deficit, up from 2.3%. In other words: more lending and more public spending to provide a boost to demand. In the short term, that shores up confidence in the growth outlook. Medium term, of course, there is a price to be paid.

Stocks are mounting a modest rebound on this terrible data (moar stimulus hopes) but after $1 trillion of new credit in 2 months, is there seriously anyone left who thinks moar will help?