By CHUN HAN WONG at The Wall Street Journal

The arrangement helped millions of poor, rural Chinese join a new consumer class, though many also paid a heavy price.

Now, many migrant workers struggle to find their footing in a downshifting economy. As factories run out of money and construction projects turn idle across China, there has been a rise in the last thing Beijing wants to see: unrest.

In Xiguozhuang, a village among cornfields some 155 miles south of Beijing, it had been rare to see working-age men for much of the year. This year, however, many of the men are at home, sidelined by a fading property boom.

“Times are tough now,” said Wang Hongxing, a 39-year-old father of three who has worked at building sites across China’s northeast since his teens, but who has spent the past two months tending his farmland plot. “There are too many workers and wages are dropping.”

But for other migrants, especially those of a younger generation who took jobs in factories along China’s coast, a return to farming isn’t an option. Nor do they necessarily want to join the service sector China sees as a cornerstone in its shift to a new economic model.

Wang Chao dropped out of school when he was 15 and left his home in Anhui province. After a series of jobs up and down China’s east coast, he felt he had struck gold with a job in a textile factory near his hometown. 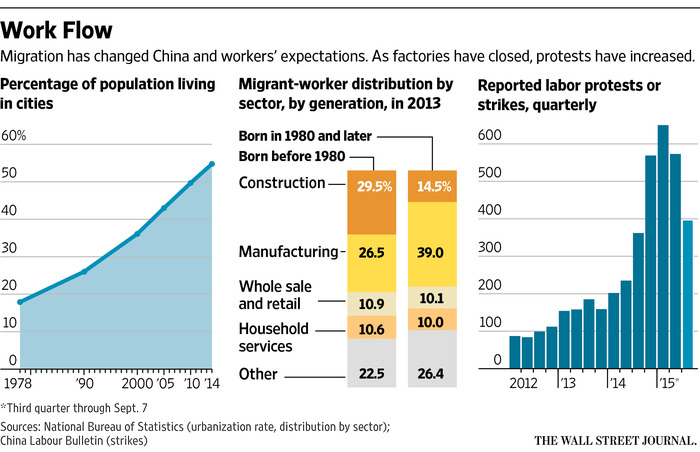 The factory closed in July. Mr. Wang, now 19, and other workers gathered recently outside the factory premises to demand back wages. He says he is owed two months’ pay, or about 2,000 yuan, or $320. The owner of the factory, which produces cheap trousers, told workers he is in deep debt and can’t afford to pay them. He couldn’t be reached to comment.

Mr. Wang hopes he can find another factory job. In Shanghai, he worked in a restaurant but doesn’t want to do that again. “Factory work is so much more comfortable in comparison, and better paid,” he said.

As a result of a rural-to-urban flow that many scholars say is likely the largest in history, roughly 55% of China’s 1.37 billion people now live in cities, compared with just under 18% in 1978.

The migrant workforce now numbers some 274 million but the pace of its expansion has slowed, and many economists believe China now faces a shortage of unskilled labor in urban areas. A mismatch of workers’ skills and aspirations with actual labor demand has exacerbated the problem.

For the men of Xiguozhuang these labor-market imbalances haven’t translated into higher wages. In fact, when they do find work it’s for lower pay. 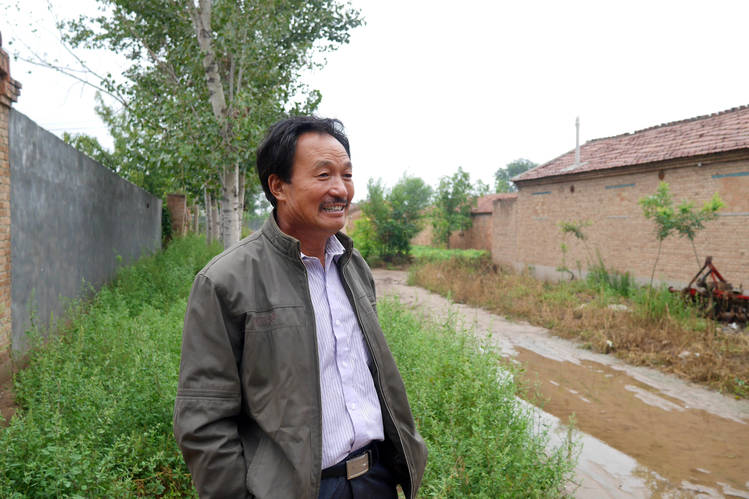 ENLARGE
Jiang Tiechen, a 50-year-old construction worker and a father of two, outside his home in Xiguozhuang Village, a small farming community in northern Hebei province. Many migrant workers have been returning to their hometowns amid dwindling employment opportunities in parts of China badly hit by a broadening economic slowdown. PHOTO: CHUN HAN WONG/THE WALL STREET JOURNAL

Three years ago, they could earn as much as 10,000 yuan a month on construction jobs; Jiang Tiechen, a 50-year-old widower, recently made only half that building villas in Tianjin and worries about providing for his two children.

“Who else can go out and make money?” said Mr. Jiang, who lost his wife to cancer two years ago, after a lengthy medical struggle that exhausted his family’s savings.

In the cities, social safety nets for migrant workers are even more porous under the Chinese household-registration system that ties access to public services to a person’s place of birth. Such restrictions have prompted many migrant workers to leave their children behind in their hometowns, where they can receive schooling and health care.

As many as one in five Chinese children now grows up without one or both parents, according to the All-China Women’s Federation, a Communist Party advocacy group.

Nevertheless, many still prefer an uncertain existence in the city to going back home.

Duan Anqing, a 35-year-old native of southwestern Sichuan province, has worked for more than a decade in the southern industrial city of Dongguan, where he lives with his elderly parents, his wife and 9-year-old son. “We’re all more or less settled here.”

In August, after the factory where he worked, which made Power Wheels cars and other toys for Mattel Inc., shut its doors, Mr. Duan joined hundreds of workers in protests to demand unpaid wages.

The malaise has even affected workers at major state-owned enterprises. In May, thousands of workers staged protests over proposed layoffs at China National Erzhong Group Co., a debt-riddled machinery maker in Sichuan. Workers shared images on social media of banners criticizing company officials. One read: “360 yuan! How can we live on that!”

In response to such disputes, local authorities have at times adopted harsh tactics, including sending police officers to break up strikes and detain protesters. But in some cases authorities have also sought to appease workers.

In Dongguan, Mr. Duan was briefly detained by authorities along with around 20 other protesting workers. In the end, local authorities offered to pay 90% of the wages they were owed.

The recent unrest is still far from the massive protests that swept over China in the late 1990s and early 2000s as state-owned enterprises laid off tens of millions of workers and local governments expropriated farmland around emerging cities for development.

But the rise in frequency of strikes and protests has caused concern in Beijing, which in March urged bureaucrats across the country to prioritize “harmonious labor relations.”

In June, the State Council—China’s cabinet—issued guidelines for encouraging migrant workers to return home and try their hand at entrepreneurship. Some have already done so, using savings from factory stints along the country’s industrial coast.

Fan Quanlin, 28 years old, spurned family’s farm in Henan province 10 years ago to work at a Foxconn factory in Shenzhen. He has returned to Henan to open a smartphone store outside a factory Foxconn has opened in Zhengzhou, the provincial capital.

“Our profits have decreased as competition intensified in this area,” said Mr. Fan, who targets nearby Foxconn employees as his customers. “But I still make more money than an assembly worker, who only earns about 2,000 yuan a month.”

But to the men in Xiguozhuang, whose only work experience is in construction, career change isn’t a viable option. “We have no skills to take up factory jobs, no capital to start our own businesses,” said Wang Hongxing.

Their reluctance highlights the gap in expectations between younger and older migrants.

According to a 2013 study on migrant workers by the National Bureau of Statistics, some 80% of China’s 125 million migrants born in 1980 or later have never farmed. About 55% of them work in major or mid-size cities, compared with just 26% of migrant workers born before 1980.

But those, like Mr. Duan in Dongguan, who have gotten used to life in China’s traditional manufacturing hubs along the coasts, may need to adjust their expectations again as some manufacturers search for cheaper labor.

Wages in China’s manufacturing sector now exceed comparable levels in South and Southeast Asia by as much as six times, according to the state-backed Chinese Academy of Social Sciences. Some of the work has shifted to neighboring countries like Cambodia and Vietnam, while factories are also moving deeper into the mainland, and closer to home for many migrants.

But he expressed bitterness about how government officials treated him and his coworkers.

“Some of the officials asked us, ‘Why did you come here to Dongguan? Just stay home and work there!’” he recalled. “Don’t they know how much we’ve contributed to the economy?”