Chronicling The Fed’s Follies: America’s Housing Fiasco Is On You, Alan Greenspan

So far we have experienced 7 million foreclosures. Beyond that there are still 9 million homeowners seriously underwater on their mortgages and there are millions more who are stranded in place because they don’t have enough positive equity to cover transactions costs and more stringent down payment requirements.

And that’s before the next down-turn in housing prices—a development which will show-up any day. In fact, another downward plunge is a positive certainty now that the buy-to-rent LBO speculators are rapidly pulling out of those “flash” bull markets in Arizona, California, Los Vegas, Florida and elsewhere. The latter were merely short-lived price eruptions which were an artifact of the Fed’s free money policies.

Yet even as Wall Street heads out of Dodge City the normal wave of organic buyers is nowhere to be seen. That’s because the inexorable normalization of interest rates is already beginning to drive housing affordability even further south among the diminishing cohort of buy-to-occupy households with sufficient income to meet today’s financing standards.

Among the latter, incomes are stagnant in real terms and have been so for a decade. In the absence of real income gains, therefore, the “affordable” price of housing is essentially an inverse function of the cost of leveraged carry. As the latter goes up, the former goes down.

In short, the socio-economic mayhem implicit in the graph below is not the end of the line or a one-time nightmare that has subsided and is now working its way out of the system as the Kool-Aid drinkers would have you believe based on the “incoming data” conveyed in the chart. Instead, the serial bubble makers in the Eccles Building have already laid the ground-work for the next up-welling of busted mortgages, home foreclosures and the related wave of disposed families and social distress. 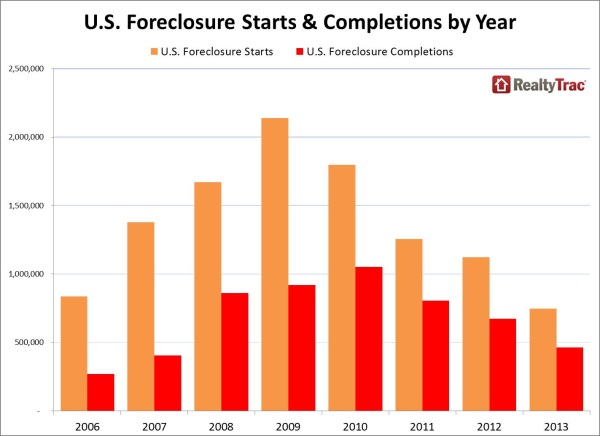 Yet none of this carnage was inexorable or necessary. In fact, a housing bubble of the fantastic magnitude that unfolded during the Greenspan era could not occur on the free market. The 3X gain in housing prices between 1994 and 2007 was entirely an artifact of the massive outpouring of cheap mortgage debt that occurred during that period. The latter, in turn, is a consequence of the Fed’s financial repression policies—–maneuvers that disable and paralyze market interest rates and thereby enable runaway speculations fueled by virtually unlimited cheap debt.

Oddly enough, even the baby-steps toward normalization of interest rates recently taken by the Fed make it easy to benchmark the monumental scale of the mortgage bubble ignited by the Maestro’s abject capitulation to Wall Street after the Bush Republicans gained the White House in December 2000. On an all-in basis, Greenspan’s reckless money printing increased mortgage volumes by up to 5X what would have prevailed in an honest free market.

{adinserter 1} As I laid out in chapter 20 of the Great Deformation (“How The Fed Brought The Gambling Mania To America’s Neighborhoods”), during the 30 months after the Fed’s first bubble splattered—the dotcom crash—-Greenspan foolishly cut money market interest rates over and over until the 6.5% cost of money on Christmas eve 2000 had been reduced to 1% by June 2003. Never before in the Fed’s 100-year history had rates been reduced by 85% in such a short interval with such reckless abandon.

Such a massive explosion of ultra-cheap mortgage debt was guaranteed to elicit a frenzy of speculation in residential housing. Indeed, as is evident in the chart above during the roughly 60 months after Greenspan’s panicky rate reductions incepted, the national housing price index doubled.

The great Fed Chairman of yester-year like William McChesney Martin and Paul Volcker would have been appalled by such an outbreak of speculation and would not have hesitated to pick up the punchbowl and march straight out of the party. That’s what Martin did in August 1958 when he suspected too much speculation on Wall Street only six months after a business recovery had started.

But Greenspan had by then been coroneted as the Maestro and proceeded to prove exactly why monetary central planning is such a dangerous doctrine.  When it  became evident that large amounts of this massive outpouring of mortgage debt were being used as “cash-out” financing and applied to current spending on new carpets, autos and Caribbean cruises, Greenspan pronounced this destructive raid by mortgage borrowers on their own home equity nest-eggs as a fabulous new advance in financial innovation called “mortgage equity withdrawal”. It would even outdo Keynes: the people, not their government, would imbibe the magic elixir of more debt, and thereby generate more spending, income and economic growth.

In truth, America’s baby-boom generation was robbing its own future retirement years, but the Maestro was oblivious.  Instead, he was busy tracking the quarterly rate of MEW (“mortgage equity withdrawal”) and crowing about how it was contributing to unprecedented  prosperity on Main Street. It ended up in a conflagration of exploitive lending, fraud, default and trillions of financial losses, of course, but not until $5 trillion of cumulative MEW during the decade through 2007 had ruined the financial well-being of America’s middle class for a generation to come.

Under a regime of free market interest rates $5 trillion of MEW—that is, robbing from the future to party today—could not have happened. Long before the 2003-2006 blow-off top, mortgage interest rates would have soared to double digit levels, causing monthly debt service requirements to double or triple. Moreover, in an environment of market-set interest rates there would have been no Greenspan Put or ultra cheap wholesale financing that enabled Wall Street to fund mortgage boiler shops with warehouse credit lines and buyers of its toxic securitization products with cheap repo.

In short, free market interest rates are the vital check and balance mechanism which prevents runaway spirals of debt issuance and frenzied bidding-up of asset prices.  Yet it was Greenspan’s “wealth effects” doctrine that destroyed the mechanism of honest price discovery once and for all. The carnage that has ensued in the nation’s credit and housing markets, therefore, is on you, Alan Greenspan.

The outcome of the Bernanke money printing spree of 2008-2013 provides even further evidence of Greenspan’s original culpability.  During that five-year period, the Fed drove the 30-year mortgage rate from 6.5% to a low of 3.3%, thereby trigging a renewed wave of “refi madness” as shown below: 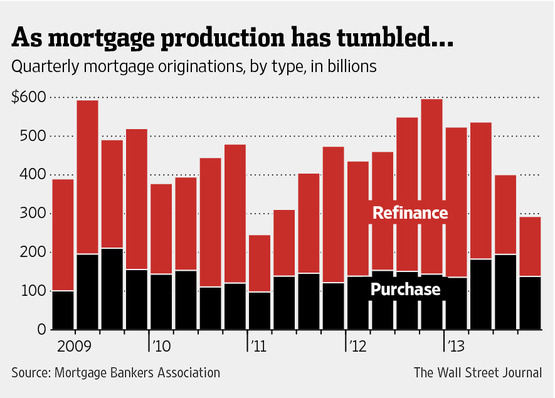 Since the spring of 2013 when the Fed signaled that its massive bond purchases would enter the “taper”, however, the mortgage rate has rebounded to about 4.5%. Accordingly, about 35% of the Bernanke repression has already been retraced and even that modest start toward interest rate normalization has had dramatic impacts on mortgage volumes.

The mortgage refi machine is now virtually shutdown, meaning that the run rate of mainly purchase money mortgage originations has plummeted to about a $1 trillion per year. So the math is pretty basic: During much of the Greenspan housing bubble the mortgage origination rate was $3-4 trillion annually—a level dramatically above what is being generated right now in a market that has taken only a baby step toward normalization.

Needless to say, it was this massive and artificial excess of mortgage financing that created the original Greenspan housing bubble; that induced his successor to try to overcome the carnage of the bust with a new round of refi madness; and that has now left the nation’s residential housing market high and dry for the fourth time since 1990.

As shown below, this short-term flash boom in housing prices induced by Bernanke’s money printing spree has driven first time buyers out of the market. And now more and more “trade-up” buyers will be forced out too— as they face steadily higher interest rates on new purchase mortgages and therefore progressively lower levels of home price affordability: 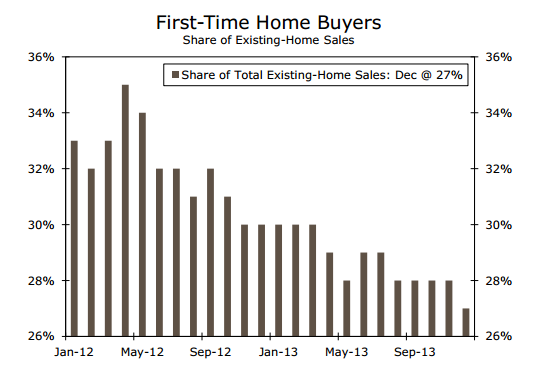 So the housing market is on the eve of another trip through the grinder of falling prices, rising defaults and spreading socio-economic distress on Main Street. Yet because the Fed gets away with ludicrous excuses about the mayhem it causes—such as Greenspan’s pathetic claim that the housing bubble was caused by the propensity of ex-rural serfs in China to save too much when they moved into the factory cities— the debilitating cycle of bubble finance goes on.

As this recent Wall Street Journal story so starkly conveys—policy makers and lenders are so desperate to restart a new round of phony housing finance that the 3% down mortgage is already back, and 10,000 pages of Dodd-Frank regulations have done nothing so stop it:

One such lender is TD Bank, Toronto Dominion’s U.S. unit, which on Friday began accepting down payments as low as 3% through an initiative called “Right Step,” geared toward first-time buyers and low- and moderate-income buyers.

TD.T in Your Value Your Change Short position