By Porter Stansberry at Daily Wealth

We are in the early stages of a great debt default – the largest in U.S. history.

We know roughly the size and scope of the coming default wave because we know the history of the U.S. corporate debt market. As the sizes of corporate bond deals have grown over time, each wave of defaults has led to bigger and bigger defaults.

Default rates on “speculative” bonds are normally less than 5%. That means less than 5% of noninvestment-grade, U.S. corporate debt defaults in a year. But when the rate breaks above that threshold, it goes through a three- to four-year period of rising, peaking, and then normalizing defaults. This is the normal credit cycle. It’s part of a healthy capitalistic economy, where entrepreneurs have access to capital and frequently go bankrupt.

If you’ll look back through recent years, you can see this cycle clearly…

Interestingly, the amount of capital involved in this cycle was much, much larger: Almost $500 billion became embroiled in default. The growth in risky lending was powered by the innovation of the credit default swap (CDS) market. It allowed far riskier loans to be financed. As a result, the size of the bad corporate debts had grown by 10 times in only one credit cycle. 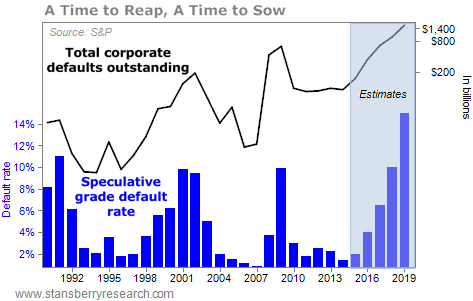 The most recent cycle is the one you’re most familiar with – the mortgage crisis.

Six years after default rates normalized in 2003, they suddenly spiked up to almost 10% in 2009. But thanks to a massive and unprecedented government intervention, featuring trillions of dollars in credit protection, default rates immediately returned to normal in 2010. As a result, only about $1 trillion of corporate debt went into default during this cycle.

You should know, however, that the regular market-clearing process of rising, peaking, and normalizing default rates did not occur in the last cycle. A massive, unprecedented intervention in the markets by the Federal Reserve stopped the default cycle in its tracks. As a result, trillions of dollars in risky debt did not enter default and were not written off.

Over the last six years, this “victory” against bankruptcy and the credit cycle has led many government leaders and their economic apologists (like Paul Krugman) to declare victory. What they won’t admit is that the lack of a debt-clearing cycle has resulted in a weak recovery, and an economy that’s still heavily burdened by unsustainable debts.

What happens next should be obvious to everyone: The big debt-clearing cycle that was “paused” in 2009 will make the next debt-clearing cycle much, much larger – by far the biggest we’ve ever seen. When will that happen? Six years after default rates last returned to normal. In other words… right now. 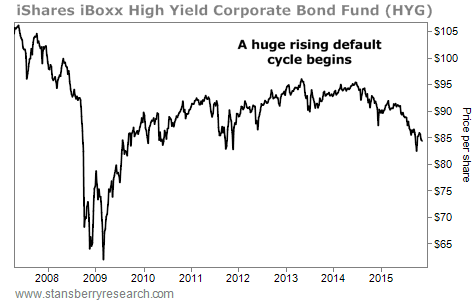 The chart above shows the iShares iBoxx High Yield Corporate Bond Fund (HYG), which invests in a broad range of speculative corporate bonds. As the risk of defaults in this market grows, these bonds will begin to trade at much lower prices, causing their yields to increase. Currently, the yield on this basket of bonds is less than 6%. Look for yields to increase to well above 10% before default rates begin to normalize. That implies losses of 30%-40% are still to come in these bonds.

Over the last year, HYG is down about 9%. A negative return is unusual for the corporate-bond market, especially when there isn’t a recession.

So far this year, nearly 300 U.S. corporations have seen their bonds downgraded. That’s the most downgrades per year since the financial crisis of 2008-2009. The year isn’t over yet. Neither are the downgrades. More worrisome, the 12-month default rate on high-yield corporate debt has doubled this year. This suggests we are well into the next major debt-default cycle.

And it will almost surely be a “super” cycle – meaning it will last longer and cause far more losses than most people expect.

Here’s another way to time the next debt-clearing cycle.

Martin Fridson, the world’s foremost expert on the high-yield bond market, says his “base-case scenario” is for between $1.6 trillion and $2 trillion in defaults in high-yield bonds over the next three to four years. We believe default rates will be a lot worse, simply because the market has grown so much, thanks to things like CDS credit protection and the securitization of subprime consumer lending.

Now, before you panic… here’s an idea you’ll see us repeat again and again over the next three to four years.

Instead, this period could be the best opportunity that you will ever get to buy great assets and great businesses at great prices.

You don’t need to think of this coming crisis as the “end.” Instead, think of what’s happening as a badly needed reckoning. It’s simply a housecleaning. Nothing much will change. The best assets and best businesses will still be here after the storm. The only real difference will be who owns them.

What’s coming is the greatest transfer of wealth in history. Over the next few years, trillions of dollars’ worth of businesses, land, resources, and intellectual property are going to exchange hands – legally, but unwillingly.