Comey’s Scathing Rebuke Of Hillary Is Its Own Indictment

To indict someone, the criteria is supposed to be “intent.” Comey has used that to pretend there is no evidence that Hillary “intentionally” erased anything. Comey also stated that Hillary’s lawyers erased her emails using a keyword search program and they did not “read” the emails. He added that he would not recommend charges against Hillary or her aides.

It was Comey who indicted Frank Quattrone for claiming he instructed his people to erase emails in his technology-industry banking group at Credit Suisse Group’s Credit Suisse First Boston, based upon a single email that read “clean up those files” in December 2000. That was more than enough for his “intent” requirement to obstruct justice. This further illustrates the double standard of justice for them vs. us.

Comey has said that he could not find anyone else who had been prosecuted for such a thing, but then added after clearing Hillary that this is not to say everyone in the government can do this or that they would not prosecute someone else for the same thing. Comey said,“[O]ur judgment is that no reasonable prosecutor would bring such a case.”

Comey presented a scathing rebuke of Hillary’s conduct that anyone else would have certainly been indicted for. For Obama to have announced in advance he would campaign for Hillary, it was clear that this was a cover-up and he knew the results before today. For Comey to say, “Although we did not find clear evidence [of any intentional misconduct] there is evidence that they were extremely careless of very sensitive, highly classified information.” It is the jury’s role to determine if there is any evidence and the case should have been presented for a Grand Jury to decide if she should have been indicted. That, of course, is off limits as well.

Comey went on to all but acknowledge that Russia hacked Hillary’s emails:

For Comey to claim neither the Department of Justice nor the White House knew what he was going to announce, seriously undermines his trustworthiness in this matter. Of course, Obama knew or he would not have scheduled to campaign for Hillary since, if indicted, she would have had to be on bail to stay out of jail to even campaign. This is by no means credible. But nobody would have expected Hillary to be indicted when the Democrats control the executive branch. Had Hillary been indicted, she could not have run for office, for even that statute says such a person would be disqualified for such an office. The entire election would have been a fiasco and the Democratic Party would have collapsed. This is what Bernie was holding out for and why he had his talk with Obama who informed him forget it — there would be no indictment for Hillary.

Then, Comey contradicted Lynch in making it clear that the final decision was her’s: “As a result, although the Department of Justice makes final decisions on matters like this, we are expressing to Justice our view that no charges are appropriate in this case.” 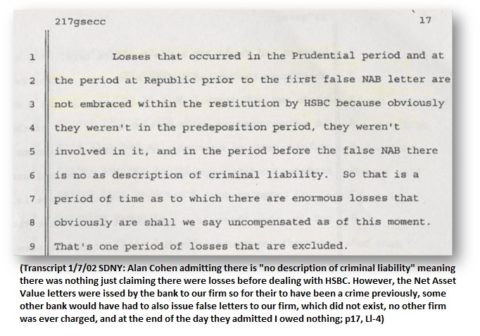 James Comey was the chief prosecutor in the Southern District of New York between 2003 and 2005. He had no problem keeping me in Federal Prison on contempt of court without any charges, indictment, or a civil complaint describing any crime whatsoever that they even admitted openly in court. There were never any charges or complaint filed, and they publicly stated, “[T]here is no description of criminal liability.” Yet, Comey allowed me to be held in prison, entirely arbitrarily, with absolutely nothing whatsoever; Comey completely violated my civil rights, those of my family, and all 240 employees. So he is not someone who upholds the Constitution when it goes against government or the banks. As they say, the Department of Justice is really “Just Us” in reality. He has proven that once again. 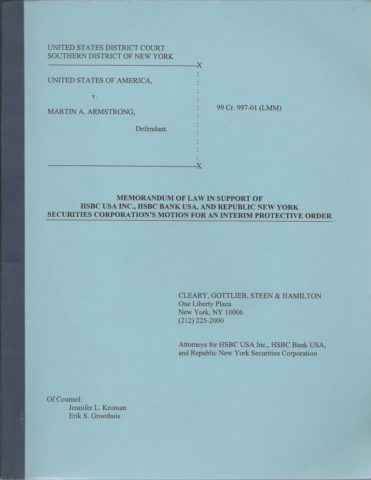 Comey also allowed a LIFETIME GAG ORDER on me to prevent me from providing any assistance to my clients in Japan to sue the bankers. Now the State Department has asked for a two-year stay in turning over any of Hillary’s emails. Why  would they do that if there is nothing criminal? This only proves that this is a cover-up, as always, because the Democratic Party cannot allow Hillary to go down for they would lose everything. Sorry, but Comey has a track record of defending the banks even when they stole $1 billion and pleaded criminally guilty before having to pay them back. He kept me in prison on contempt to turn over assets for a “possible” restitution, but when I got into the Supreme Court, I was released and no such charges were ever filed nor did I ever have any restitution. They then tried to prevent “The Forecaster” from being shown in the USA.