Resource companies are facing renewed pressure to cut spending and investor payouts after a deepening commodities rout erased billions of dollars in shareholder value on Thursday.

Oil and mining companies that expanded rapidly over the past decade when commodity prices soared have already slashed tens of thousands of jobs and mothballed billions of dollars of projects. Now they must search for new savings as their long-held hopes of rebounding commodity prices fizzle on weak Chinese demand.

Mining companies “are still reacting to the reality that China did not turn out to be the picture of ever increasing demand people thought,” Lourenco Goncalves, chief executive of Cleveland-based iron-ore miner Cliffs Natural Resources Inc., said in an interview Thursday.

Glencore PLC and Anglo American PLC have slashed their dividends—a step big companies are loath to take for fear of alienating big shareholders—after stock prices plummeted over cash-flow and debt concerns. The world’s biggest miner, BHP Billiton Ltd., is facing similar pressures as iron-ore prices drop and as it contends with the fallout from a deadly mine-dam breach in Brazil last year. A BHP spokeswoman declined to comment.

Oil companies went through a big boom cycle over the last decade, but they are now “in another one that’s going to be down for a while,” BP PLC Chief Executive Bob Dudley told the BBC in an interview aired over the weekend. A BP spokesman said the comment is in line with Mr. Dudley’s comments last year.

Oil prices have fallen by more than two-thirds since mid-2014, dipping below $33 a barrel on Thursday before paring some of those losses. Prices for major industrial metals such as copper and zinc have fallen by 34% and 28%, respectively, since June 2014. China accounts for roughly 45% of global demand for both metals.

A prolonged rout could be part of a shift in world-wide market dynamics. Chinese commodity demand that long buoyed prices is now flagging, and over the past year the Organization of the Petroleum Exporting Countries has abandoned its traditional role of stabilizing oil prices, instead feeding a supply glut in competition with U.S. shale producers.

Other oil producers have also continued heavy pumping, in some cases to pay down debt or support government spending, even though it means further driving down oil prices.

After putting off more than $200 billion in oil projects last year, big energy companies may not ramp up spending when prices rebound, Bernstein Research said this week.

“Oil company spending will remain capped even if oil prices rise,” Bernstein analysts wrote. The normal link that sees spending rise with oil prices may be “broken,” they said, after big companies that outspent their cash flow even when oil prices were triple today’s value enter a new period of frugality. 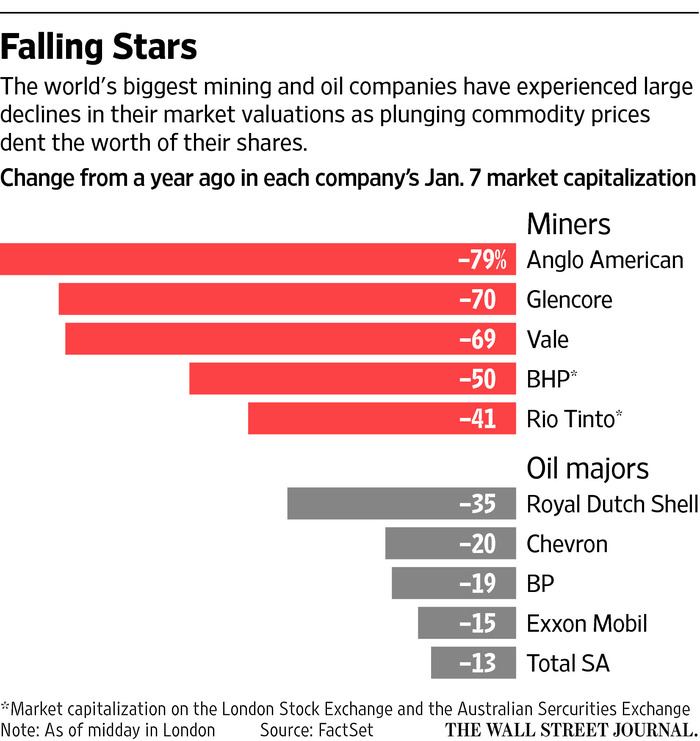 The industry’s troubles will put pressure on energy companies to orchestrate acquisitions and asset sales, said energy consultancy Wood Mackenzie this week, with private-equity firms in the best position to take advantage.

The combination of Chinese turmoil and high oil production in the U.S. and OPEC members offer little hope of near-term respite. For oil companies, the expected return of Iranian oil exports when Western sanctions are lifted early this year could send oil prices down further.

“You can’t say a good thing about the oil price,” said Paul Mumford, a fund manager with Cavendish Asset Management whose funds hold shares of oil and mining companies. He is also bearish on small mining companies, many of which may end up with cash-flow problems if prospects don’t improve soon. Already, larger mining companies have responded to falling prices with layoffs and temporary closures of projects like a Glencore mine in Zambia.

One key to survival for smaller mining companies, says Ignacio Salazar, the Chile-based chief executive of small, Toronto-listed Orosur Mining Inc., is to avoid taking on high-risk debt now that “the market is not very favorable.”

Phoenix-based Freeport-McMoRan, one of the world’s biggest copper miners, is in survival mode, shutting down mines, laying off workers, and putting its oil and gas division on the block, but says it has enough confidence in the long-term copper market to keep running its biggest, lowest-cost mines in places like Peru, Indonesia and the Democratic Republic of Congo. Activist investor Carl Icahn, who disclosed an 8.5% stake in August, forced out longtime chairman James R. Moffett in December, and could push for even more aggressive changes.

Big oil companies have signaled cutbacks. They have backed out of big projects like a Shell development in Canada to mine petroleum from oil sands. The oil industry laid off more than 250,000 workers across the world, analysts say. In December, Shell lowered its projected spending for 2016 by $2 billion to $33 billion, after making spending and cost cuts of $12 billion last year.