By John Ficenec at The Telegraph

The collapse in commodity prices has sparked a second credit crisis as investors dump high-yield bonds, shattering the fragile confidence necessary to support global markets. Those calling it a Lehman moment forget their history. Current events have chilling similarities to the Bear Stearns collapse and mark the start of a new crisis, not the end.

Canary in the mine

The world of commodity trading has been thrown into chaos as the cost of borrowing to fund operations soars. Glencore has become the poster child for the sector’s woes as its shares have more than halved in value during the past six months. More worrying has been the impact on the group’s credit profile. 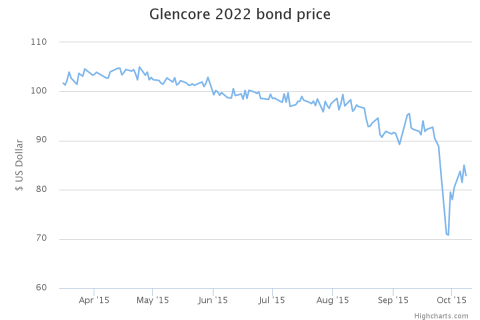 Glencore’s US bonds due for repayment in 2022 have collapsed to around 82 cents in the dollar. Only four months earlier, they had been stable at around 100 cents, implying that those who lent money would get it back plus interest. Now for every dollar lent to Glencore, banks face losses, and as the price of bonds falls the yield has risen to 7.4pc. 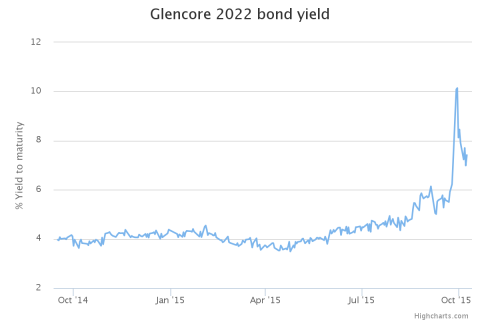 Without the oxygen of cheap debt, commodity trading houses are finished. Each trade in oil or iron ore might generate only 1pc to 2pc in margin – but this greatly increases when magnified by debt. The only limit on profits is then how much you can borrow. Greed drives returns.

Glencore is a profitable business when it can borrow at around 4pc, but if it has to refinance at 7pc to 10pc those slim profit margins evaporate.

The fear of those holding Glencore debt can be seen in the soaring price for the insurance against a default, or credit default swaps (CDS). Glencore five-year CDS has soared to 625, from about 280 just a month ago.

A rule of thumb is that a CDS above 400 means a serious risk of a default, or about a 25pc chance in the next five years. 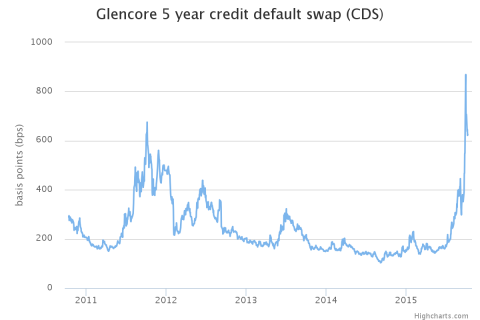 Glencore has taken drastic action to reduce its $50bn (£33bn) debts, or $30bn if all its stocks of metals are deducted, which it reported at the end of September.

A $2.5bn equity raising has been completed, the dividend has been axed and assets sold as part of a $10bn debt reduction plan. However, if borrowing costs remain where they are, the game may already be over.

If Glencore itself were to fold, it would be a huge problem with its $221bn in annual revenues, but when combined with the other commodity trading houses, Trafigura, Vitol and Noble, the fallout would be disastrous.

Trafigura is not listed but its debt is publicly traded and the bonds have collapsed to 86 cents in the dollar, or a yield of 8.9pc. Noble, the Singapore trading house, has also seen its shares collapse as commodity prices slump. First-half profits from Noble’s metals trading have fallen 98pc to just $3m. This has been offset by strong results in oil trading, but the problems remain.

Last week, four senior metals traders are understood to have left the business and the bonds have fallen to 73 cents on the dollar, or a yield of almost 16pc. 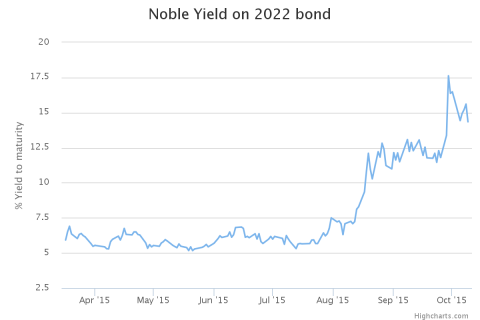 Banks are still willing to lend to these traders, despite the increased risk. Vitol and Trafigura last week raised over $10bn in borrowing from a syndicate of different banks and at lower rates than existing deals.

The Bank of England has asked banks to investigate their exposure to commodity trading houses, but this feels like closing the stable door long after the horse has bolted.

The credit crisis for commodity traders has been called a Lehman moment, likening it to the failure of the giant US bank.

However, this proves just how short memories are in financial markets. Lehman was the last domino to fall, not the first.

The first dominoes to fall

The first casualties in the previous credit crisis were the Bear Stearns hedge funds that collapsed in July 2007.

The aggressive push by Bear Stearns into the once-booming market for mortgage-backed bonds led to its collapse once US house prices began falling  Photo: EPA

The money poured in until markets behaved in unpredictable ways in 2007, the value of mortgage-backed securities collapsed, investors became spooked and the fund had to exit positions at depressed prices.

Fast-forward eight years and commodity trading houses that rely on huge borrowings to earn small margins are suffering from unpredictable prices and are being forced to sell at depressed prices as credit markets get spooked about risk.

Back in 2007, once the credit markets had turned it was only a matter of time until first Bear Stearns collapsed in March, and then Lehman finally imploded in September 2008.

As panic grips credit markets, it could rapidly cause markets to seize up completely.

The credit markets are showing extreme levels of distress. The number of deals in the high-yield debt market slumped by 60pc in the third quarter, when compared to the prior quarter, according to Dealogic. Companies that did access funding had to pay investors far higher interest rates for the money they borrowed.

The stock market may have just experienced its strongest week since 2011, but this seems to be based more on hope than any evidence of improvement in the fundamentals. The echoes from 2007 are worrying.