Core Capital Spending Down Every Month Since January

The current year-over-year decline is about 1.78%. Part of the decline is due to the oil industry collapse. Another part is due to corporations deciding to invest in share buybacks rather than their actual businesses.

Big declines in core capital spending occurred in the last two elections, but this dip does not yet measure up.

Signs of a Soft Rebound?

The Wall Street Journal discusses the 2016 forecast in Will Business Spending and Profits Rebound This Year? 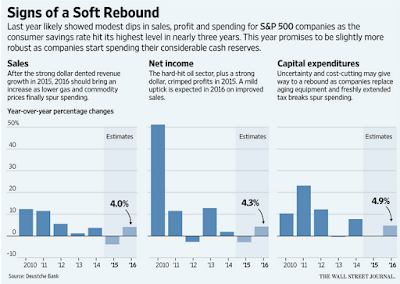 The text of the article does not sound as convincing. Here are a few snips.

The Federal Reserve had enough confidence in the economic recovery to raise interest rates in December, but it remains unclear whether global growth will be buoyant enough to reverse weak business investment.

Capital expenditures by members of the S&P 500 index fell in the second and third quarters of 2015 from a year earlier, the first time since 2010 that the measure has fallen for two consecutive quarters, according to data from S&P Dow Jones Indices. Another measure of business spending on new equipment—orders for nondefense capital goods, excluding aircraft—was down 3.6% from a year earlier in the first 11 months of 2015, according to data from the U.S. Department of Commerce.

More broadly, only 25% of small companies plan capital outlays in the next three to six months, according to a November survey of about 600 firms by the National Federation of Independent Business. That compares with an average of 29% and a high of 41% since the surveys began in 1974.

“Our guys are in maintenance mode,” said William Dunkelberg, chief economist for the trade group. “This recovery still stinks.”

That sentence corresponds with my take.

However, the Journal notes a December tax bill makes permanent the research-and-development tax credit and faster capital-equipment write-offs for small businesses and a highway bill provides $305 billion of federal funding for roads and other transportation projects over five years.

Chad Moutray, chief economist of the National Association of Manufacturers, had this to say: “The tax legislation eliminates annual uncertainty over whether these incentives will be renewed. You can start planning for what you’re going to be investing in 2016 and 2017, and that’s huge.”

It seems to me Moutray has things backwards. Any uncertainty over whether incentives would be removed should have pushed demand forward, not backwards.

If companies thought tax credits would expire, they would have had a tendency to spend in 2015, not 2016.

Is Moutray is just another cheerleader like we see at the National Association of Realtors?

Yet, the Journal quotes Robert Sires, CEO and owner of Bay State Cable Ties LLC, a Crestview, Florida maker of nylon cable who said “I delayed some purchases, not knowing what would happen” with the tax situation.

That statement would make perfect sense if we were talking about new credits for 2106, not extensions to credits expiring in 2016.

Sires next comment, and also the end of the Wall Street Journal article gets back on track: “Still, customers have been cautious recently, placing smaller orders. Everybody feels like they’re standing on a banana peel,” said Sires.

All in all, the Journal seems rather unconvinced about the “Soft Rebound” thesis, and I am even more skeptical.