It’s official: the start to the holiday shopping has been a disaster, and it’s not simply due to a shift to online spending.

Perhaps online stores are doing better than last year (we will find out soon how much of those soaring sales are at the expense of plunging margins during the Q4 earnings, or lack thereof, season) due to a migration of dollars spent from brick and mortar outlets online, but the easiest way to eliminate the confusion and find out how much spending is really going on, is to simply follow not the use of funds, but the source which these days means credit card spending.

Conveniently, there is a way to do just that courtesy of Bank of America’s aggregated card spending data.

According to BofA, in order to keep tabs of Thanksgiving holiday spending, it is particularly useful to track BAC aggregated credit and debit card spending during the period from Black Friday to Cyber Monday to get an early read on consumer behavior.

However, it adds that simply examining sales during the Black Friday weekend is an incomplete way to gauge holiday traffic given the earlier start to promotions and the ease of shopping online.

The bank has therefore redefined its early holiday sales proxy from the BAC aggregated card data to “core control” (retail sales ex-food services, autos, gasoline stations and building materials) for the three weeks ending on Black Friday. Based on this definition, the bank finds that early holiday sales were down 1.2% from last year, the first decline since the recession.

Even Bank of America is at a loss how to sugarcoat this result: “while this is clearly a disappointing result, we suggest some caution. Most importantly, the BAC proxy of early holiday sales is not a perfect gauge. In particular, last year, the early BAC data showed an increase of only 1.4% yoy, while actual holiday sales were up 3.8% due to a big push right before the holidays.”

Well, if this year the annual comps are solidly negative then applying the same delta, it would mean that the “seasonally adjusted” retail sales data will be about 1.2%, a 70% drop from last year. Not sure how one can spin that. 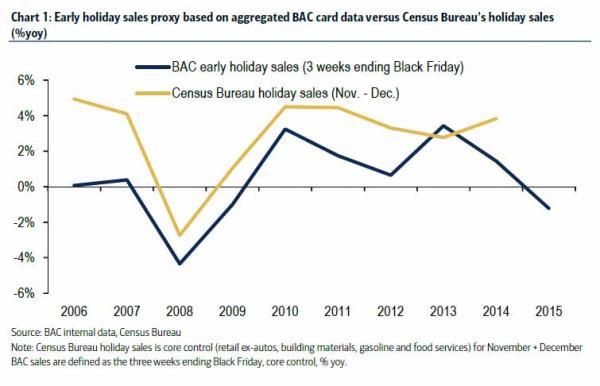 Where it gets even more confusing is that as BofA itself demonstrates, if only looking at the “consumer statistics” spending this holiday season should be through the roof, with higher earnings, lower unemployment, a higher savings rate, higher consumer sentiment and, most importantly, oil prices which are 25% lower.  Unless, of course, either the government’s data is completely fabricated, or there is some unmentioned tax (coughobamacarecough) which is leading to a collapse in consumer spending.

The bottom line, as BofA grudgingly admits, is that “the BAC aggregated card data suggest a weak start to the holiday shopping season”… but don’t despair “there is still time to see improvement as promotions keep rolling in.”

We won’t hold our breath.