Consumer revolving credit has been in the news recently as the Fed’s data on consumer credit  for April reportedly showed a record surge. However, we have more current data and it clearly shows that these reports are another case of hysterical media over reaction.

The Fed’s weekly H8 statement reports the aggregate balance sheet of the nation’s commercial banking system every Friday as of Wednesday the previous week. Current data is for the June 4 week. It shows credit card debt up by 1.77% year over year.

That’s in nominal terms. Adjusted for inflation, that’s a big fat zero, zilch, nada. So much for “increased consumer confidence,” increased consumer borrowing, yadda yadda, propelling retail sales. As usual, it’s juvenile nonsense from breathless teenage Valley Girl reporters. The vast majority of American consumers remain moribund. The evidence strongly indicates that they are going backward, not forward, as their real income continues to shrink. Whatever gains there are in retail sales, are being driven by the handful of people at the top of the wealth spectrum, and by shopping tourism, as foreigners pour into the US to vacation and shop in steadily growing numbers. 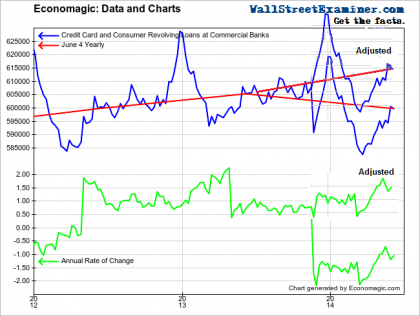 The upper lines of each scale are as adjusted for the drop caused by the divestiture. Note that the annual growth rate maxed out last year just above 2%. It has never been higher than that. That’s about the level of CPI inflation. The current growth rate at 1.77% may actually be below CPI inflation, in other words, negative real growth.

Furthermore, lest we forget, interest accrues on credit card balances often at rates of 10-20%, not the rates on the free money the Fed hands to the banks week in and week out. Under certain circumstances, for example if consumers simply maintain the same level of spending each month but make only minimum payments, their card balance can grow. Some overextended borrowers open new credit cards to make payments on existing balances. Based on accruing interest, the level of real credit card spending is probably declining. We would need to have more data to know the real truth about these numbers. One thing is certain, the headline data for April, and the hysterical reporting by the mainstream media, was bogus and misleading.

In case you’re wondering, commercial banks do nearly 75% of credit card lending. As goes this data, so goes the Fed’s extremely delayed monthly consumer lending data. While there was “growth in the spring” particularly in March and April when it came from an extremely weak level, real growth is nil, and in fact, the growth rate declined in the mid May-early June period.