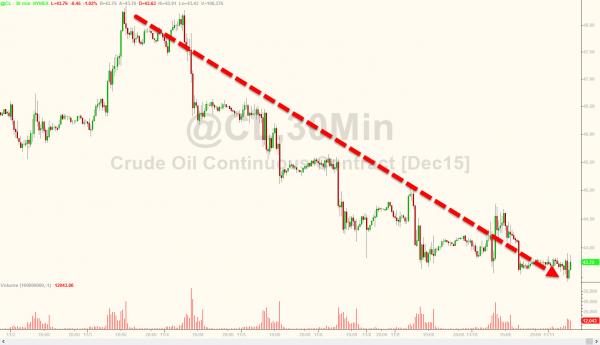 But OPEC has another trick up its sleeve to crush US Shale oil producers. As Bloomberg reports,

Iraq, the fastest-growing producer within the 12-nation group, loaded as many as 10 tankers in the past several weeks to deliver crude to U.S. ports in November, ship-tracking and charters compiled by Bloomberg show.

Assuming they arrive as scheduled, the 19 million barrels being hauled would mark the biggest monthly influx from Iraq since June 2012, according to Energy Information Administration figures.

The cargoes show how competition for sales among members of the Organization of Petroleum Exporting Countries is spilling out into global markets, intensifying competition with U.S. producers whose own output has retreated since summer. For tanker owners, it means rates for their ships are headed for the best quarter in seven years, fueled partly by the surge in one of the industry’s longest trade routes.

Worst still, they are slashing prices…

Iraq, pumping the most since at least 1962 amid competition among OPEC nations to find buyers, is discounting prices to woo customers.

The Middle East country sells its crude at premiums or discounts to global benchmarks, competing for buyers with suppliers such as Saudi Arabia, the world’s biggest exporter. Iraq sold its Heavy grade at a discount of $5.85 a barrel to the appropriate benchmark for November, the biggest discount since it split the grade from Iraqi Light in May. Saudi Arabia sold at $1.25 below benchmark for November, cutting by a further 20 cents in December.

“It’s being priced much more aggressively,” said Dominic Haywood, an oil analyst at Energy Aspects Ltd. in London. “It’s being discounted so U.S. Gulf Coast refiners are more incentivized to take it.”

So when does The Obama Administration ban crude imports?

And now, we get more news from Iraq:

So taking on the Russians?

Finally, as we noted previously, it appears Iraq (and Russia) are more than happy to compete on price.. and have been successful – for now – at gaining significant market share…

Even as both Iran and Saudi Arabia are losing Asian market share to Russia and Iraq, Tehran is closely allied with Baghdad and Moscow while Riyadh is not. That certainly seems to suggest that in the long run, the Saudis are going to end up with the short end of the stick.

Once again, it’s the intersection of geopolitcs and energy, and you’re reminded that at the end of the day, that’s what it usually comes down to.