The Commerce Department reported that the headline number for August housing starts was 1.142 million units. This was below the overly optimistic consensus estimate of economists of 1.186 million, and below the July figure of 1.212 million. The numbers are reported on a seasonally adjusted annualized basis, which means that any month to month error in the seasonal factor finagling is multiplied times 12.

We prefer to look at the actual data on a rate of change basis, comparing years for a measure of whether the current report was weak or strong.

The actual data showed total starts for August to be 100,700 units. It was indeed a weak performance, up just 1.5% year over year. The month to month change was far weaker than August 2015, and the second worst August performance since housing began to collapse in 2007.  While August is always a down month, this year’s drop of -13.5% was far worse than last year’s August decline of 8%. It was also more than twice the average August decline of -6% for 2006-2015.

Those figures include both single and multifamily units. Single family alone did even worse, rising just 0.5% y/y. This is a complete stall in the single family housing industry. The August month to month decline of -6% was the worst August performance since 2007. The average August decline is -5.1%. It was the second straight month where the annual growth rate fell, sliding from +8.1% in June. The annual growth rate was persistently in double digits from April 2015 to March 2016. August’s weak performance was in spite of mortgage rates being 75 basis points lower than in August 2015. 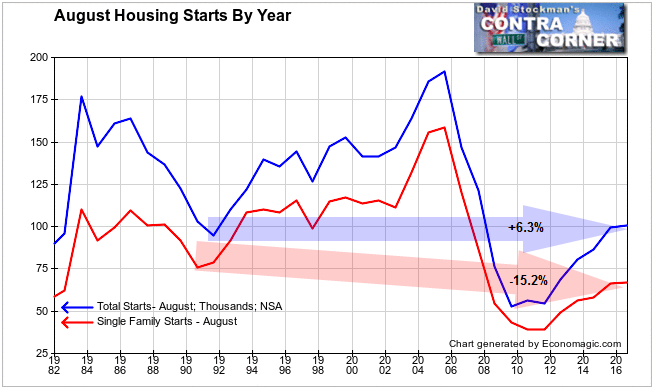 In addition there have supposedly been a couple million jobs added in the past year. Why aren’t builders building more units to absorb what should be growing demand? It’s because most new jobs are low pay. Even with lower mortgage rates, buying a new home is simply out of the question for the majority of American households. How can the Fed raise the phony Fed Funds target rate, faced with that reality?

How much of a “recovery” is this really, anyway? Single family starts are not even back to the level reached at the bottom of the 1991 recession. It would be laughable if it weren’t so sad. They’re barely above the levels of the Reagan recession in 1982. How can economists and their financial media PR megaphones call this a “recovery” with straight faces?

The rate of housing starts has been even worse than these charts depict because US population grows by about 1.1% per year. But demand is falling as a percentage of population. On the basis of starts per million population the current level of single family starts is still 11% below the level at the bottom of the 1991 recession. They call it “recovery,” when in fact the industry is still in the pits of a deep depression. It is a depression that will never end as long as good working class jobs continue to disappear or be shipped to Mexico, Vietnam, and Bangladesh. The $10 an hour jobs that are being added won’t pay for new housing even in 3 income families.

About that vaunted boom in multifamily construction? It’s true that multifamily starts have recovered to the peak levels of the mid 1990s through 2007. The last real boom however was in the mid 1980s. The number of multifamily units being developed now is down 58% from the 1983 peak on a population adjusted basis.

And let’s get serious about how important the housing industry really is to the US economy. The latest data shows that it contributes only 3% of GDP. This is after years of extreme measures by the Fed to make housing more affordable, and to stimulate demand. Minor changes in the growth rate at these levels will have minimal impact on the economy as a whole.

Finally, the number of workers required to build new housing is continuously dropping as construction methods become more and more efficient. More than twice as many housing units are produced today than when the market began to rebound in 2011. Yet that requires only 27% more construction workers.

Without more good, high paying jobs, the housing development industry has reached the limit of its recovery, regardless of what the Fed does. 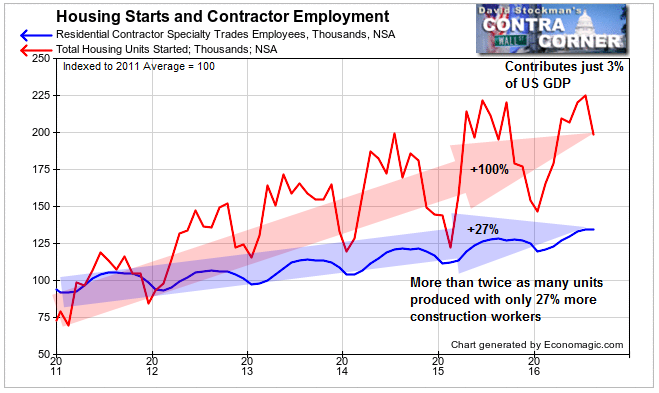