Dear Mr. President- How Many Jobs Will Building a Wall Create? Part 1

If you have ever wondered what’s the best business to be in for wages and growth, there’s no contest. It’s doctors’ offices. This includes not just the doctors, but the office staff, including nurses, medical secretaries, medical assistants, and receptionists.  That little tidbit came out of a deep look I took at BLS data on job growth, current wages, and the growth of real wages during the economic “recovery” since 2009 until last month.

This is a huge issue today. The white, blue collar working class of the dying cities of the post-industrial heartland, which the Democrats since Bill Clinton have forsaken in favor of Wall Street, was supposedly the deciding factor in electing Mr. Trump. So where should Trump seek to retrain these folks to find jobs? And which industries are seeing the biggest long term hit from technological and societal trends? Ultimately, as investors, we want to know what impact these things will have on our stock portfolios.

I included 10 major industry sectors and 9 selected industry groups in this review.  First, I took a broad overview of 10 of the largest industries in the private sector and one mostly in the public sector to see how they were doing in terms of real wages after adjusting for inflation. This chart shows how these large industries did in terms of the rate of increase in real earnings, current wages, and growth in total jobs.  The subsectors are covered in Part 2 of this report. 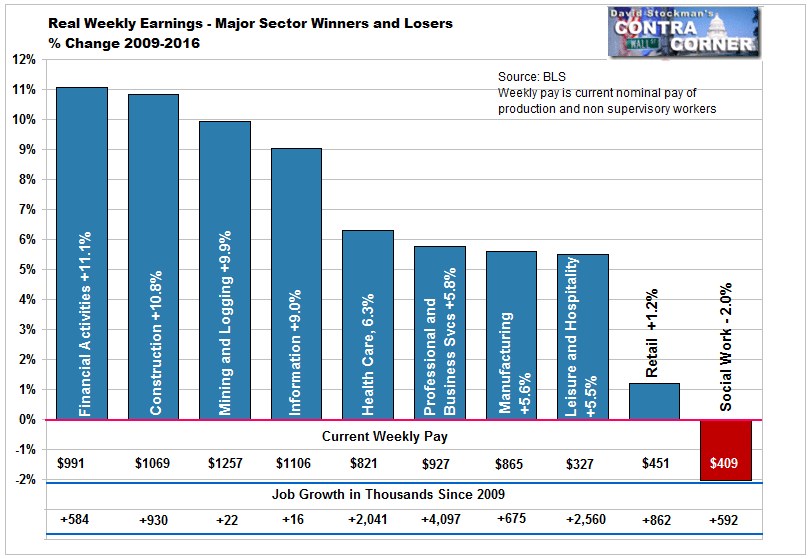 It’s no surprise. The biggest real pay increases were in the Financial sector. Employee pay exceeded the CPI by 11.1% over the last 7 years. Employment in the sector is now 8.3 million, up from 7.8 million in October 2009, a gain of 7.5%.

Maybe Goldman Sachs really is doing God’s work as Lloyd Blankfein said in November 2009. The financial industry is hiring people and paying them more. While finance workers are seeing higher pay, but the growth rate of the sector is only around the US population growth rate. Do the laid off manufacturing workers of Pennsylvania and the Midwest qualify for these jobs? Probably not too many of them. In this oversupplied labor market, the best qualified get the jobs, and they get them first.

Social Work, which is almost entirely a public sector occupation, got the booby prize, with a 2% decline in real earnings since 2009.  The Department of Health and Human Services and state and county welfare departments almost pay less than people can earn on welfare.  Non-managerial social workers now earn an average of $409 per week.  Even 2 incomes at this level are well below US median household income.

Construction workers have done pretty well income wise, considering that there are far less of them working today than in the early 2000s. In October 2007 just as the housing industry was in the early stages of its crash there were 7.8 million construction workers. That number fell to 6 million in 2009. It has risen to 6.9 million today, up nearly 16%.

Construction wages have risen by 10.8% in real terms since then. The problem is that there are still a lot of unemployed construction workers who aren’t being rehired. Meanwhile, bond yields have risen from 1.35% to 2.12% since July. Mortgage rates have lagged that increase, but they won’t be far behind. They’re starting to move now. That will choke off the weak new housing construction “recovery.”

Commercial real estate is overbuilt. We have too much retail space in an era of ever growing online shopping. That means there will be no increases in retail space construction. We have too much office space, considering that ever more people are telecommuting. So there won’t be much new office building construction. We’ve had a massive boom in distribution warehouse construction, and too much obsolete manufacturing space, with no sign of a US manufacturing revival on the horizon. In fact with the dollar strong, manufacturing in the US is dead and getting deader.

Meanwhile commercial real estate is selling at all time record low yields and record high prices. No other era in history, even the peak before the collapse of the late 1980s comes close.

As bond yields rise, commercial property prices will collapse and a glut of foreclosed space will hit the market. I saw this happen firsthand as a commercial property appraiser in the late 1980s and early 1990s. It took a decade for commercial real estate to even begin to recover. That’s just another reason to see construction employment getting worse from here.

So private commercial construction isn’t the answer.  We’re going to need a hell of a lot of infrastructure construction to make up for the job losses headed our way in the construction industry, Mr. President.

In the Retail sector. in terms of real wages, retail workers aren’t doing much better than the social workers . Store clerks have supposedly seen real wage gains of 1.2% since 2009. That’s as adjusted for CPI. As both David Stockman and I have repeatedly shown in past reports, the effective inflation rate is probably between 0.5% and 1% higher than reported CPI. Over a period of 7 years that would take about 5% off the BLS’s officially reported CPI adjusted real wage gains. In other words, that reported 1.2% gain for retail workers is probably more like a 4% loss in purchasing power.

16 million people worked retail in October. That’s up 592,000 in 7 years. Here again we see a growth rate that’s around the rate of population growth. That will diminish steadily as online shopping continues to grow.  Retail clerks earn an average of $450.87 per week in today’s nominal terms.  So there will be no jobs and there’s no pay. Next.

The two sectors with the largest employment growth were Professional and Business Services (PBS) and Leisure and Hospitality.  PBS grew by nearly 4.1 million jobs since 2009, by far the biggest gain of all the major sectors. The current average wage is $927. Real earnings grew by 5.8% in CPI adjusted terms. If an accurate inflation gauge had been used, the real growth rate would have been closer to zero.  At least workers in that sector have been able to tread water in terms of purchasing power.

The number of jobs has grown substantially in PBS. There are opportunities in this sector for people with at least some college, but not for people who work with their hands, except for those who are retrainable. Perhaps Mr. Trump could create jobs for corporate masseuses.

The sector with the second largest jobs increase since 2009 was Leisure and Hospitality. It added nearly 2.6 million jobs.  The good news is that real wages grew by 5.5% adjusted for CPI. The bad news is that using a more realistic measure of the cost of living, wages probably didn’t grow at all in real terms.

The current average weekly wage in this sector is $327. These are jobs that forgotten blue collar workers could do, but they won’t pay the bills. Sure, sure restaurant servers and bartenders have tip income which may not be fully reflected in that figure, but most of that income is now captured in credit card receipts, so most of it is reported. The additional hidden tip income probably isn’t material. The $327 average figure is probably about right for your local Cracker Barrel worker.  The Ruth’s Chris server working 3 busy shifts a week and making $1200 is the exception.

The outlook for the long term unemployed and underemployed blue collar workers is pretty bleak.  Workers who do basic labor or are semi skilled, probably won’t find many jobs suitable for their skill level in Professional and Business Services. For many of them, retraining isn’t an option.

Meanwhile, there’s no growth in Mining and Logging, or in the Information sector.  There just aren’t any new jobs in those sectors

Health Care offers a potential avenue for some of these workers. They can either work in the lowest paid, unskilled occupations in the field or possibly retrain for some of the better jobs. On average, health care jobs pay $821 per week.  Many front line healthcare workers earn $500 per week or less including aides and orderlies. However, the average is skewed by the medical technologists and senior RNs and BSN’s who may earn upwards of $2000 per week.

Last but not least, the one sector where jobs are growing rapidly and where the forgotten blue collar worker would have opportunities is Leisure and Hospitality. The average pay in that sector is $327 per week. Keep in mind, this is the average salary. A restaurant or hotel job simply will not pay the bills. People need two of these jobs just to earn a basic living. Many of them do hold two jobs, working 16 hours a day.

In view of this data we must ask ourselves where all the high paying jobs that can sustain people will come from. How will the economy continue to grow under these conditions. Finally, given the low growth outlook, how can stock prices possibly remain at these levels?

In Part 2 of this report, we drill down into subsectors of these industries to see who the biggest losers and biggest winners might be, and whether that offers any hope for the future.