Dear Mr. President- How Many Jobs Will Building a Wall Create? Part 2

In Part 1 of this report we asked where all the high paying jobs will come from that can sustain the forgotten American blue collar working family. Reviewing the broad employment sectors of the US economy, we saw little hope for improving the lot of most blue collar workers. That has negative implications for the US economy and the stock market over the longer run.

In this report, we drill down into industry subsectors to see who the biggest losers and biggest winners might be, and whether any of these smaller employment groupings offer any hope for the future. I will demonstrate to you that they do not, and that you should plan your investments accordingly.

I mentioned in Part 1 that there’s no contest for what is the best business for wages and growth. It is doctors’ offices. Oil and Gas drilling workers make more money and have had slightly faster income growth than medical office workers since 2009 but very few people work in the oil and gas drilling industry compared to the numbers working in medical offices. Even with 25% total growth in oil and gas production since 2009, that has only resulted in an added 5,000 workers a year. Furthermore, real wage growth in the oil business has stalled since the top in oil prices in 2014, and total employment in that business had been crashing since early 2015. Oil and gas drilling gets the employment booby prize for the past 2 years, losing about 28,000 workers, a drop of 14%. Employment in this industry is anything but stable. It’s another example of good, high paying blue collar jobs going away. 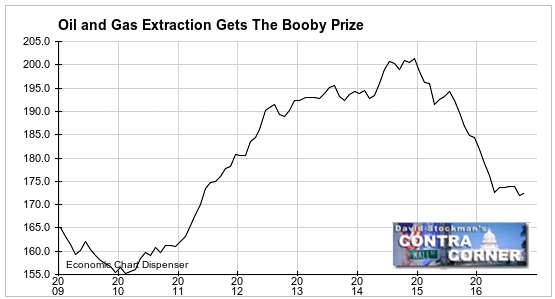 So medical offices get the grand prize. This means not just the doctors, but the office staff, including nurses, medical secretaries, medical assistants, and receptionists. Employment in the field is growing. Real wages are rising.

But there’s a problem. The ACA (Obamacare) expanded and protected the existing medical insurance system while extending coverage to sicker people who were excluded from the system before. Costs are skyrocketing as a result. President-elect Trump has promised to dismantle most of the ACA while keeping the provision that insurers can’t deny coverage because someone has preexisting medical conditions. So costs will only rise faster, making care even more unaffordable. Major cuts in the provision of care may be coming, resulting in a radical slowdown in the jobs growth in this sector. The golden goose of the medical services industry may be cooked.

The table below summarizes the selected groups that seem to be the biggest employment subsector winners and biggest losers since 2009. It shows industry employment ranked by the total number of employees in each of the chosen groups. This makes it easy to see which sectors are big and growing, and which sectors are not so big, growing or not. The smaller sectors offer little prospect of enough growth to be material to the big picture.

The table also shows how much real earnings have grown in each group as well as the current weekly wage for each. Most of these subsectors have a current average pay that enables two earners to support a family, at well above the poverty level.

Real earnings growth is as adjusted for inflation. However, this adjustment uses the government’s CPI measure as the divisor. We have shown elsewhere that CPI understated actual cost of living increases by between 0.5% and 1.0% per year over the 2009-2016 period. To be realistic about real earnings, we should probably lop another 4.5% to 5% off the total reported growth rates for each group.

That would not change the relative rankings in terms of total income gains or losses. The strongest earnings gains would still be in oil and gas extraction and medical offices, followed by Investment Advice. 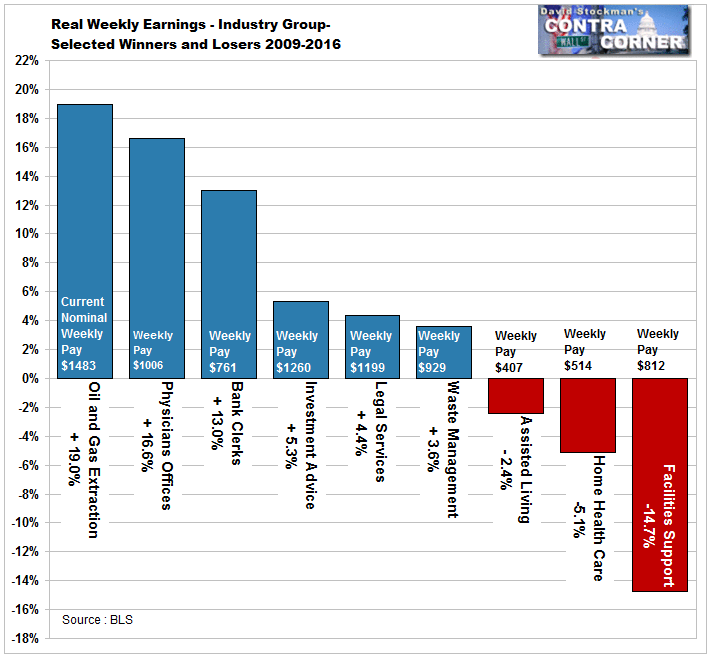 Oil and gas is currently a dead end. While wages are still high, employment is falling. Even when the sector is growing, it would only add a few thousand jobs a year. The magnitude of the jobs problem is in the millions. 5,000 jobs added per year doesn’t even amount to a rounding error in the bigger scheme of things.

Bank workers are doing well in terms of real increases in earnings. Real wages have risen by 13% since 2009 to the current weekly wage of $761, or just under $40,000 per year. Two income households in that business would do ok, but the problem here again is that bank employment is shrinking. There are no new jobs in banking.

The investment advisory business has been growing like a noxious weed, but there aren’t many opportunities for blue collar workers in that field. While real earnings have grown by more than 5% since 2009, that is probably actually no better than zero, using a “reality” based inflation gauge. Worse, investment advisory workers have seen their weekly earnings plunge since mid 2015. The crash in weekly earnings in the investment business raises questions about the sustainability of jobs growth in this sector. Wall Street seems to be preparing for a long overdue contraction. 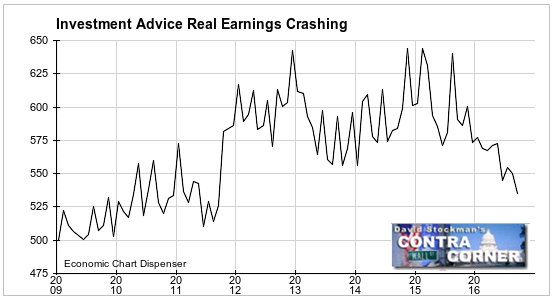 Legal office workers, not including the bosses, have seen their pay rise by 4% in 7 years, in CPI adjusted terms. Use of a more accurate inflation measure would show no gain or a small decline in real terms. Legal workers aren’t fooled by the CPI. They know their wages are barely keeping up with the cost of living. The same goes in many industries reporting small gains in “real” earnings. The public knows that it’s not true.

Workers in waste management and remediation supposedly saw real earnings gains since 2009, but again it’s a question of how inflation is measured. Reality based inflation measures would show workers in this field losing ground in real earnings. Pay scales are pretty good for doing work that most people wouldn’t want, but the industry is small and only adds about 8,000 workers a year, who are picking up garbage, cleaning septic tanks, and removing mould and asbestos. There’s no solution for unemployment or low pay here.

The 2 lowest paying sectors are home health care and assisted living workers. They are growing at very high rates, and will grow even faster as baby boomers pass from merely “old age” to “very old age.” There are jobs coming in this sector, but they pay barely subsistence wages. The low wages earned by workers in these businesses, who are often working two jobs, have fallen by 2.4% and 5.1% respectively since 2009. That’s probably closer to 7-10% in reality. The recent increases in some state and local minimum wages have mitigated that somewhat in the short run, but it’s a one-shot deal.

There are over 1.8 million jobs in these two eldercare sectors, and that number is likely to grow by 70-80,000 per year. These low pay jobs will be the best that many former blue collar workers can hope for. But growth here is nowhere near enough to replace 5 million manufacturing jobs lost since the year 2000.

Finally, building support service workers are reasonably well paid on average, at $812 per week. Unfortunately, wages in that sector are collapsing. Here’s why.

This is a blue collar sector. It is one sector that is a natural move for laid off manufacturing workers, but the field is just too small to make a difference. Labor for facilities service work is massively oversupplied. There are few job openings relative to the numbers of workers available. Furthermore, employment in the sector is growing at a rate below the population growth rate. The number of jobs is shrinking relative to population. Because so many former manufacturing workers and others are seeking jobs in this field, wages are collapsing. It’s not a positive dynamic.

Whether we look at broad economic sectors, or zoom in to smaller sub groupings, there’s just no sign and no real hope of ever absorbing millions of laid off blue collar workers back into the work force. US households will continue to earn less in real terms, and even in nominal terms in many cases. An economy that can’t help its workers to attain increased wages, or even to get jobs at all, is an economy that is in deep trouble. The process of decline is too slow to be noticed in the short run. But looking back, we know that we are worse off as a society. The future looks just as hopeless.

This is how and why a demagogue like Donald Trump could be elected President of the United States. Will shutting down our borders, kicking out illegal immigrants, building walls and trade barriers make a measurable difference? This question has many parts. First, will the government actually do what Trump promised? And second, will it work if technological change is inexorably making more and more jobs obsolete? Beyond that, will putting up trade barriers result in higher prices, reduction in retail jobs, and generally even more deprivation for even more Americans?

Time will tell. But a shrinking jobs market with lower pay for most workers isn’t likely to be reversed anytime soon, regardless of who the President is. The power structure is likely to remain largely intact. The Establishment will, as always, look to preserve its power and prerequisites. Cronyism and systematic looting and skimming of the US economy will continue, contributing to a steady decline in US living standards. In the short run, anything can happen, but over the long haul, this is a perfect scenario for a long term secular bear market. We must plan our long term investments accordingly, regardless of what the short term may bring.