Yesterday we looked at how the Treasury is playing games with its bookkeeping so that it can continue to raise new public debt while having been at the legal debt limit since March 16. Now here’s a look at what’s coming in terms of new bond supply, and what that means for the markets as we look ahead.

Treasury Note and Bond Sales in May

The Treasury added $44 billion in new coupon supply during May. That was a huge turnaround from $24 billion in paydowns in April. As a result of the supply increase, yields inched up in the second half of May.

The Treasury has kept new supply at near normal levels by using the trick of paying down intergovernmental debt, in other words, the money that the Federal Government owes the Social Security “Trust Fund.” It can also raid government pension funds and other internal accounts to find the cash to pay its regular bills.

The intergovernmental debt counts toward the total debt subject to the debt limit. If the Treasury uses some cash or tax revenue to pay that down, it can continue to borrow money in the market. I’m not sure why they would want to do that, other than to keep business flowing to the Goldman Sachs Gang, but that’s what they’re doing for the time being. Instead of paying down the debt the government owes the public, it is returning cash to the Social Security Trust Fund.

The Federal government’s bills exceed government revenues in all months when estimated taxes are not collected. That means that it needs to borrow money to pay its expenses in May, August, October, November, and December this year. At some point in the next 2-3 months, the Treasury will run out of accounting tricks to avoid going over the debt limit. At that point supply will start to be severely restricted. Then the government will quickly run out of cash.

But when all that supply returns when the ceiling is lifted, the market will get crushed if demand only remains stable. I can’t think of a reason why it would grow enough to forestall a big selloff.

Supply and Demand Look Ahead

Treasury auction demand has been stable since the last debt ceiling crisis. Coupled with gradually falling supply, that’s been enough to keep Treasury Yields stable. However, demand was slightly weaker this May than in May 2016. Yields backed up a bit as a result. 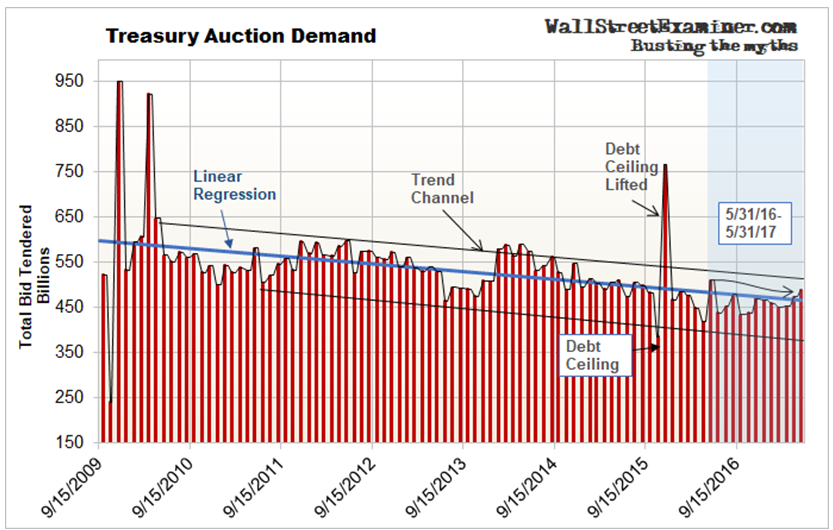 The Treasury Borrowing Advisory Committee (TBAC) is a committee of Primary Dealers which the Treasury Department has selected to advise the government of its future financing needs. The TBAC  has forecast that the Treasury would need to raise $98 billion in the third quarter and spend down $85 billion of its cash. That indicates that it expects the deficit to total $183 billion for the third quarter. It expected the Treasury to borrow $59 billion in June while increasing its cash by $30 billion. Thus, it forecast a deficit of $29 billion for June. The total estimated deficit for the June-September period would be $212 billion.

Under the debt ceiling I had thought that the government can’t borrow new money in the market. However, the Treasury boys and girls figured out how to get around that. As described above, they are using their cash and excess revenue from quarterly and annual taxes  to pay down the Social Security Trust Fund, to which the government owes some 5.5 trillion dollars. That counts toward the debt limit.

By reducing that balance, that enables the government to issue new debt in the market. We don’t know why they are doing it this way, but so far, that has kept Treasury supply in the market from collapsing. In turn, that would send yields lower, and probably short term rates as well. I suppose that they are doing this in the interest of market stability. They may also be concerned that a sharp drop in yields and T-bill rates now would make the Fed look bad. The Fed has “raised rates.” By keeping Treasury supply at normal levels, that helps to keep rates within a range that the Fed wants.

It’s probably safe to assume that they will continue to do this until they run out of cash, which looks to be about 3 months from now.

At the same time, I have little doubt that the politicians will allow this to go until the 11th hour, just like the last time, bringing the Federal Government to the brink of default.

At some point later this summer, the Treasury will have no choice but to stop new borrowing in the market sending yields and money rates lower. But soon after that, it will all reverse into a vicious selloff once the debt ceiling is raised and the government returns to the market.

Come October, if the impasse lasts that long, the government would need to borrow enough to cover a $30 billion cash shortfall, plus a cushion to bring its cash level up to normal, plus enough to cover the October deficit, which is usually around $100-130 billion. November is also a month when the government has weak revenues. The Treasury may need to borrow $200 billion or more in the space of 5 to 8 weeks in October and November. Most of that would be front loaded in October.

That will almost certainly destabilize the bond and stock markets. The longer Congress puts this off, the bigger the problem will be.

The mid month coupon offerings were announced last Thursday. The amounts to be auctioned are $24 billion on the 3 year notes, $20 billion on the 10 year, and $12 billion on the 30 year bond. That’s exactly as the TBAC forecast. So the Treasury will again issue new debt just as if  there were no debt ceiling for yet another month.