As the crude industry has been wrestling with low oil prices that declined by over 50 percent since its highest close at $107 a barrel in 2014, many exploration and production companies worldwide and in the U.S., in particular, have faced large shortfalls in revenue and cash flow deficits forcing them to cut down on capital expenditures, drilling and forego investments in new development projects.

High debt levels taken on by the U.S. oil producers in the past to increase production while oil prices soared, have come back to haunt oil and gas companies, as some of the debt is due to mature by the end of this year, and in 2016.Times are tough for U.S. shale oil producers: Some may not make it, especially given that this month, lenders are to reassess E&P companies’ loans conditions based on their assets value in relation to the incurred debt. 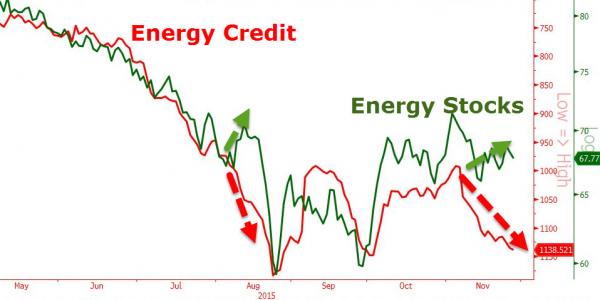 Throughout the oil price upturn that lasted until the middle of 2014, companies sold shares and assets and borrowed cash to increase production and add to their reserves. According to the data compiled by FactSet, shared with the Financial Times, the aggregate net debt of U.S. oil and gas production companies more than doubled from $81 billion at the end of 2010 to $169 billion by this June

In the first half of 2015, U.S. shale producers reported a cash shortfall of more than $30 billion. The U.S. independent oil and gas producers’ capital expenditures exceeded their cash from operations by a deficit of over $37 billion for 2014.

In July – September 2015, after a couple months of a rebound, a further slump in crude futures prices fluctuated between $39-47/bbl, thus putting more strain on the oil-and-gas producers, and making them feel an even tighter squeeze.

As The Wall Street Journal reported in August, Exxon Mobil Corp. and Chevron Corp. stated they were cutting stock-buyback programs, while Linn Energy LLC announced it would stop paying dividends to its shareholders. Meanwhile, several small U.S. oil and gas producers have filed for chapter 11 bankruptcy protection this year. Companies with persistently negative free cash flow fall into the trap of borrowing, as they have to incur more debt to repay what they have already borrowed before. This makes such companies vulnerable to default and bankruptcy.

As shared by Edward Morse, Citigroup Global Head of Commodities Research with Oilprice.com, smaller independent U.S. E&P companies are in the worst position now: they are already highly leveraged and are trying to use increased leverage while having to bear high debt pressure.

“They also are in the worst cash flow positions of all of the E&P firms per barrel of liquids production relative to the larger and even the mid-cap firms. However, they also tend to account for a much smaller share of overall production. For example, the large North American E&P companies produce around 5.0-million b/d of oil; mid-sized firms produce just short of 1-m b/d. But the small and smallest U.S. E&Ps combined produce only 500-k b/d, 100k b/d of which comes from the smallest U.S. firms,” stated Morse .

The chart from the U.S. Energy Information Administration below, based on second-quarter results from 44 U.S. oil-and-gas companies, demonstrates the rising share of the companies’ operating cash flow used to service debt.

For the previous four quarters from July 1, 2014 to June 30, 2015, 83 percent of these companies’ operating cash had been spent on debt repayments, the highest since at least 2012. 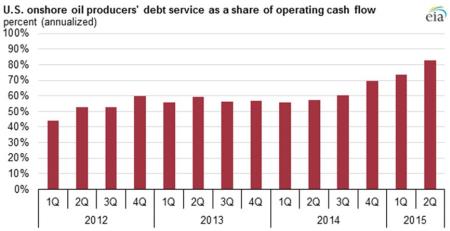 According to Forbes, among U.S. E&P companies ranking high on the verge of bankruptcy are Goodrich Petroleum (GDP), Swift Energy (SFY), Energy XXI (EXXI), Halcon Resources (HK) among others. “These companies have all lost more than 90 percent of their market value since 2014, are larded up with too much debt, and would be lucky to survive the bust,” Forbes wrote.

According to FINRA data cited by Forbes, the yield of Goodrich’s issue of 2012 bonds for U.S. $275 million jumped up to 58.66 percent from 8.88 percent during trade sessions this August. The Goodrich’s stock that previously sold at $29 in June 2014 traded at 88 cents. The company has a high leverage ratio (debt to EBITDA): in the first half of 2015, the company’s revenues amounted to U.S. $50 million while its interest expense on servicing of a long-term loan of U.S. $622 million was $27 million.

Energy XXI (EXXI) is snowed under in $4.6 billion in debt. As Forbes reported, the company was negotiating terms for extending maturities on their bonds with creditors; it also managed to find an investor who bought another U.S. $650 million worth of debt from EXXI.

Another company staggering under a heavy debt load is Swift Energy (SFY). According to Forbes, Swift’s equity market capitalization is $27 million against long-term debt of $1.1 billion. As The Wall Street Journal reported in July, the company was trying to find an investor to come up with funds to repay loans by issuing a $640 million bond.

Halcon Resources (HK) is also on the brink of insolvency. 40 percent of Halcon Resource’s revenues this year have been expended on making interest payments on its U.S. $3.7 billion debt. The company did two equity-for-debt swaps earlier this year, and sold more debt for U.S. $700 million, Forbes reported.

As Virendra Chauhan, Oil Analyst at Energy Aspects discussed with Oilprice.com, the smaller independent U.S. producers are the ones taking the most risk, particularly the ones that have been outspending cash flows quarter-on-quarter for the better part of the last three years. “The debt maturities vary, but the key factor is an over 50 percent fall in oil prices. Whilst costs have come down, they are no way near 50 percent; and so the reliance on external funding, be it through, debt, equity, asset sales or by other means, has increased, which is certainly impacting investor sentiment,” he said.

Although quite a few U.S. shale oil producers have reported substantial increases in their productivity per well drilled, the amount of rigs drilling for oil in the U.S. has dropped by 59 percent since its peak in October 2014, according to the EIA datashared by the Financial Times.

In the Eagle Ford shale of South Texas, the volume of oil produced from new wells for every operational rig, has risen by 42 per cent over the past year, from 556 barrels per rig per day to 792, EIA reported.

“Profitability and returns in the U.S. tight oil space is a moving target – many producers claim to be profitable and generate healthy returns, yet their cash flow situation has shown no signs of improving,” pointed out Chauhan. According to the analyst, producers in the Permian are likely to be better positioned than in other areas, as this basin is the least developed of the three major basins, and Pioneer Resources (PXD), which has the largest acreage in the basin is 75 percent hedged for this year with a floor of $67 and a ceiling price of $77 per barrel.

According to the IHS Energy North American E&P Peer Group Analysis Report, the weighted-average hedged prices for 2016 are $69.04 per barrel of oil and $3.83 per thousand cubic feet (MCF) of gas. The midsize E&Ps have hedged 26 percent of estimated 2016 total production. Financially distressed companies with low hedge protection and high risk in 2016 include SandRidge Energy and Ultra Petroleum.

“The small North American E&Ps have hedged 25 percent of estimated 2016 total production and continue to have the weakest balance sheets. With high debt and little hedging, EXCO Resources and Comstock Resources are at risk of serious liquidity issues if low prices prevail,” stated Paul O’Donnell, principal equity analyst at IHS Energy and author of the report.

Many investment banks and financial services companies are already facing losses on substantial investments in E&P companies, as they have committed hundreds of millions of dollars to lend to energy companies on top of the loans provided to them at the time when oil prices were surging.

Financial experts and analysts point out that some E&P companies have managed to refinance their debt, however, it becomes increasingly more difficult for them to do so as their stock and bonds lose value and the high yield return they have to offer to lenders to get financing is higher than in any other business sector.

According to Marketwatch, the energy industry Liquidity Stress subindex has pointed to a high-risk debt weighing on U.S. E&P companies, as it surged up to 16.9 percent in September from 12.7 percent in August, the highest level since it reached 19.2 percent six years ago in July 2009.

As Chauhan of Energy Aspects pointed out, it is fair to say that most oil and gas companies are not generating free cash flow at current oil prices, as these prices are below full-cycle costs for most regions in the world, with the exception of the Middle East, which is the lowest cost producer globally.

“The IOC’s are likely to be better positioned during a downturn because they have higher credit ratings and therefore are more accessible to debt markets. They also have a hedge built into their business because they will benefit from downstream profitability from improved margins,” the analyst added.

As Paul O’Donnell shared in the IHS report, only six percent of the large North American E&P production volume for 2016 production has been hedged, as these companies have stronger balance sheets to withstand the low prices. “No oil-weighted large E&Ps have any significant hedging in place for 2016”, O’Donnell said.

According to Morse, the large North American E&P companies should be able to survive and thrive, given their high production base and their free cash flows as a cover for liquids production.

“They have roughly three times the cash flow coverage as the smaller companies in terms of cash flow per barrel of oil, and they are still increasing production as a group,” commented the Head of Commodity Research.

As the study reveals, some of the large E&Ps’ capital expenditures in 2014 were: 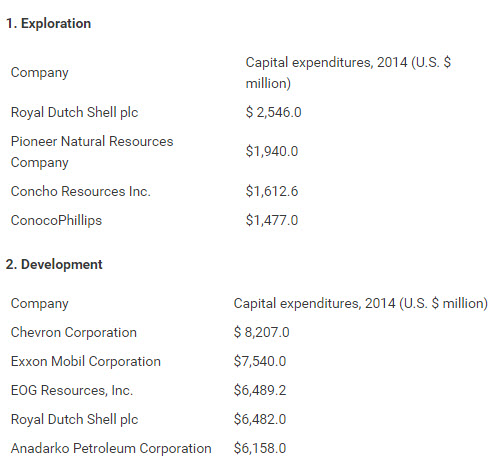 O’Donnell of IHS expects capital spending for the North American E&P group to drop 25 percent in the second-half 2015, as compared with the first-half of 2015, from approximately $60 billion to $45 billion.

As cited by Natural Gas Intelligence in September, “according to EIA, U.S. oil and gas E&Ps had reduced their capex budgets by $38 billion in 2Q2015 (to about $95 billion) compared to the preceding second quarter (about $130 billion), “the difference between cash from operations and capex was almost zero in 2Q2015.”

“The US E&P sector could be on the cusp of massive defaults and bankruptcies so staggering they pose a serious threat to the US economy. Without higher oil and gas prices — which few experts foresee in the near future — an over-leveraged, under-hedged US E&P industry faces a truly grim 2016. How bad could things get?

“I could see a wave of defaults and bankruptcies on the scale of the telecoms, which triggered the 2001 recession.”

Source: Can The Oil Industry Really Handle This Much Debt? – ZeroHedge