The National Association of Realtors (NAR) reported on Monday that (verbatim): “The Pending Home Sales Index, a forward-looking indicator based on contract signings, increased 1.6 percent to 109.0 in December from 107.3 in November. With last month’s uptick in activity, the index is now 0.3 percent above last December (108.7).”

Not a single key point in that statement is true. The only fact is that the index is based on contract signings. It is not a forward looking index. It measures sales that took place last month. Once the contract is signed, the Sold sign goes up. The buyer, seller, and agent all consider the sale done. The price is set. The property comes off the market.

So, in reality, what the NAR euphemistically calls “pending” is pending only in the sense that the legal and financial details have yet to be finalized so that the sale can go to “closing” or “settlement.” That generally happens 1 to 3 months later. That’s when the money and the keys actually change hands and a deed is recorded.These are formalities. In any given month between 90% and 99% of all previously signed deals go to closing. Therefore the “Pending Home Sales” index tells us all we need to know about sales volume. It’s as close to real time reporting or current market conditions as you can get in this game.

The second inaccuracy in the NAR statement is that sales increased 1.6% month to month. That’s just a seasonally adjusted (SA) fiction. SA numbers are a statistical trick designed to give an impression of the trend. Seasonal adjustment derives a number based on the average of the last 5 years and future data from the next 5 years. That’s right. Future data. It doesn’t exist yet.

So the seasonal adjusters spend the next 5 years revising the current number so that it ends up fitting the actual trend 5 years from now. By 2-3 years from today the SA will be pretty close to on the money. So the current number will be approximately accurate in January of 2020. Today, it’s a crapshoot. It may be close to the mark. It may not.

The fact is that sales fell in December by 19.7% month to month. But we can only tell if that’s weak or strong  by comparing it to past Decembers. Again, it falls short. December is always a down month, it’s true. But December 2015 was down 16.9%. December 2014 was down 15.5%. So this December was worse than the past 2. That shows a loss of momentum. The average December over the past 20 years, including 3 years when the market was crashing, was -20.8%. Last December wasn’t materially better than that awful time for the real estate business.

The NAR finished its lead statement by saying that the “1.6% month to month increase” led to a year to year increase of 0.3%. They achieved this result by the cardinal sin of comparing the fictional SA number for last December with the fictional SA number from December 2015.  While a gain of 0.3% would be terrible to begin with, the truth is that sales in December were down 2% year to year. That’s based on comparing the actual number for the current month to the actual number from the year ago month. That is the correct way to do it. There is no seasonality difference between the same month in consecutive years. SA numbers should never be used in this calculation.

Did the mainstream media bother to report the facts? No. They just regurgitated the slop that the NAR put out.

Pending home sales rose 1.6% from a month earlier to an index of 109 in December

But what should we expect? The NAR is the client of Journal’s parent company Newscorp. Newscorp also owns Realtor.com. It also owns News America Marketing, known for short as News America. Its slogan is “Your marketing objectives are our business.” It’s not hard to see what the Wall Street Journal’s objectives might be. It’s remarkable that at times the Journal does appear to give a balanced perspective on the home sales business. This wasn’t one of those times. At least not in the headlines. 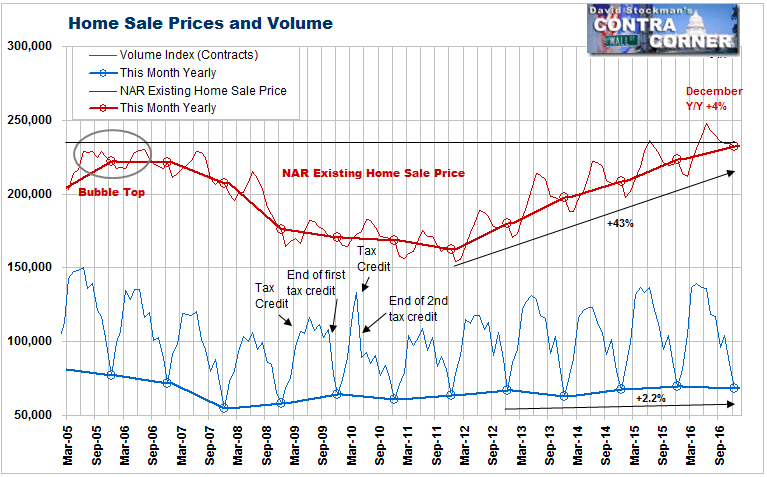 Looking back since the beginning of the home sales “recovery,” the picture is far less rosy than the NAR and media pundits would have you believe.  Volume began to rebound in 2008-2009 when prices were near their lows. While prices went slowly lower until early 2012, sales volume was increasing. By 2012 that increase in demand began to push prices higher. But as prices have risen sharply during the ensuing 4 years, volume has turned virtually flat. December sales have only risen by 2% since 2012.

Mortgage rates remained near their all time record lows until early November. They spiked higher over the rest of November and December. In December, the annual rate of housing inflation plunged to 4%. The month to month change was a drop of 0.9%. That was the first time that home prices fell in December since 2011. Sluggish household income growth hit the wall of rising mortgage rates. Price increases could no longer be sustained.

Volume goes before the fall. It takes home sellers a while to recognize the reality of a weaker market. Sales volume was collapsing as the Great Housing Bubble began to roll over in 2005 and 2006. Prices didn’t begin to slide until late in 2006.  If rising mortgage rates continue to put downward pressure on demand, volume will continue to dry up. It won’t be long until prices follow.