Definition Of Hogwash: The Dogmatic Belief That The Fed Can Fine Tune Anything

Of the debates I would most like to see, John Hussman vs. Ben Bernanke would be right near the top of the list.

Let’s kick off this hypothetical debate with a statement made by Ben Bernanke: “The problem with QE is it works in practice, but it doesn’t work in theory.”

Bernanke made that claim in response to a question if he was confident that QE (the policy of buying bonds to drive down long-term interest rates with short-term rates already at zero), would heal the economy.

Bernanke’s response proved he is a better comedian than economist.

The evidence is in. What do we have to show for QE other than one of the biggest asset bubbles in history?

Beauty of Truth vs. Beast of Dogma

Don’t take my word for it. Let’s tune into this week’s missive by John Hussman: Beauty of Truth vs. Beast of Dogma.

Hussman kicks off with a discussion only geeks can understand. But if you read far enough it quickly gets amusing.

For example, Hussman posted the following chart chart of the Taylor Rule (a rule that supposedly will allow the Fed to automatically set interest rates) with this comment …

“It’s unfortunate that the Federal Reserve is actually allowed and even encouraged to impose massive distortions on the U.S. economy based on relationships that are indistinguishable from someone sneezing on a sheet of graph paper.” 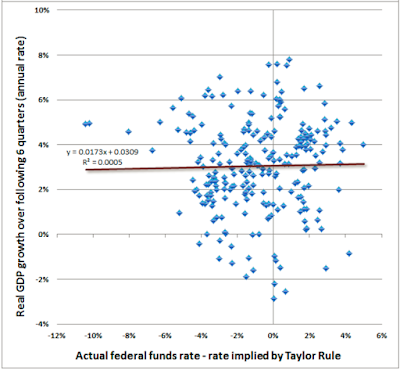 Those who managed to get to that point were in for a nice down to earth set of comments and graphs that followed.

When you examine historical data and estimate actual correlations and effect sizes, the dogmatic belief that the Fed can “fine tune” anything in the economy is utter hogwash. At the same time, the demonstrated ability of the Fed to provoke yield-seeking speculation and malinvestment is as clear as day. An activist Federal Reserve is an engine of disaster and little more. Even with the best intentions, a dogmatic Fed, unrestrained by reasonable rules and constraints, is a reckless and deceptive beast, constantly offering to heal the nation with precisely the same actions that inflicted the wounds in the first place.

Truth, on the other hand, is beautiful. Economic relationships that are supported in real-world data are a sight to behold. You want to see some relationships you can count on? The chart below shows the relationship between the 3-month Treasury bill and the ratio of the monetary base (currency and bank reserves) to nominal GDP, in data since 1929. Notice something. Without paying banks interest to hold excess reserves idle in the banking system, the Fed could reduce its balance sheet by more than one-third (over $1.4 trillion) without pushing short-term interest rates above zero. That excess base money does nothing to support the real economy.

Nobody’s desired level of saving, consumption, or real investment changes just because the Fed has chosen to force the economy to hold more base money and fewer Treasury bonds. But somebody has to hold that cash at every point in time – and nobody wants to hold it. So it simply acts as a hot potato, encouraging yield-seeking speculation in the financial markets. In my view, the most urgent action the Federal Reserve should take is to cease reinvestment of principal as the holdings on its balance sheet mature, in order to reduce this massive pool of idle base money, which does nothing but to promote speculation. No increase in interest rates would need to result from that action. 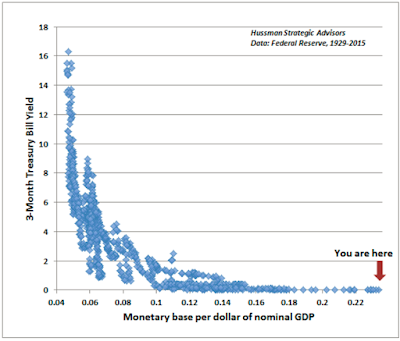 Here’s another relationship you can count on. By definition, nominal GDP is equal to the monetary base multiplied by the “velocity” of the monetary base. People often seem to believe that if the Fed doubles the monetary base, nominal GDP should double as well (either by prices increasing, real GDP increasing, or both). That outcome, however, would only occur if velocity was constant. In that case, quantitative easing would result in a greater level of spending on goods and services, rather than financial speculation. The graph below illustrates that this simply does not happen. In practice, doubling the monetary base simply causes people to hold more idle money balances, and velocity simply falls in half. As a result, actively expanding the money supply in pursuit of higher inflation or higher real GDP growth is ineffective, even if central banks create money in massive amounts as they have in recent years through quantitative easing. Because monetary velocity falls in proportion to growth in the monetary base, more QE simply depresses interest rates and distorts financial markets. 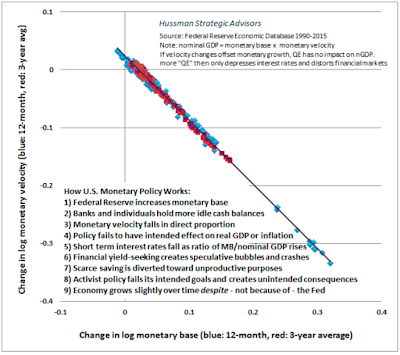 The effect of years of zero interest rate policies has been to progressively drive investors toward securities of greater and greater risk, in the belief that “There Is No Alternative” (TINA). In every other market cycle across history, once an “overvalued, overbought, overbullish” syndrome emerged in the stock market, market internals were either already deteriorating, or collapsed in relatively short order – meaning that investors became more risk averse. When overvaluation was joined by increasing risk aversion, air-pockets, panics and crashes typically followed.

In the market cycle since 2009, however, central banks aggressively and intentionally promoted speculation by holding interest rates at zero. That reduced the overlap between “overvalued, overbought, overbullish” syndromes and the eventual deterioration in market internals. Our own rather painful lesson from the recent cycle was that in the presence of QE, one must actually wait for internals to explicitly deteriorate before taking a hard-negative outlook on stocks.

After years of speculation, we currently estimate a 10-year nominal expected total return for the S&P 500 close to zero – much the same as we projected in real time at the market peak in 2000. The Federal Reserve seems to have no idea what it has done. Poor long-term market returns and severe interim losses are now baked in the cake as a result of obscene valuations. There is no way to undo this outcome – only to manage the consequences.

The real problem isn’t what the Fed may do, but the ultimately unavoidable consequences of what the Fed has already done. The cost of reckless Fed-induced yield seeking will likely be felt first in the financial markets as previous paper gains evaporate, while defaults on excessive low-quality covenant-lite credit will emerge over the course of the economic cycle, and the impact of malinvestment will be to limit productivity and economic growth over the longer run. This is all rather inevitable except in the eyes of those who haven’t watched and memorized a dozen adaptations of the same movie.

In short, my view is that activist Fed policy is both ineffective and reckless (and the historical data bears this out), and that the Federal Reserve has pushed the financial markets to a precipice from which no gentle retreat is ultimately likely. Similar precipices, such as 1929 and 2000, and even lesser precipices like 1906, 1937, 1973 and 2007 have always had unfortunate endings. A quarter-point hike will not cause anything. The causes are already baked in the cake. A rate hike may be a trigger with respect to timing, but that’s all. History suggests we should place our attention on valuations and market internals in any event.

It’s easy to find the mistakes of others (Ben Bernanke and Paul Krugman provide endless opportunities), but it’s not so easy to admit your own.

Although things may not play out the same way next time, my own policy is to admit mistakes, or someone else will do it for you. Here’s the key sentence from Hussman that explains where value investors, me included, went astray.

“Our own rather painful lesson from the recent cycle was that in the presence of QE, one must actually wait for internals to explicitly deteriorate before taking a hard-negative outlook on stocks.”

QE did not do a damn thing for the real economy. In fact, by encouraging speculation, QE made matters worse.

But until the bubble bursts, QE allows Bernanke and the ECB to crack jokes and Laugh Like a Hyena. Click on link for video of actual hyenas laughing.

The answers to questions 1-3 are easy. Non, non, et non! (as my high school French teacher frequently stated years ago). 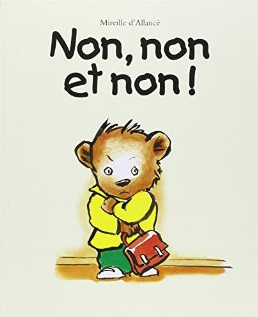 For investors, question number 4 above is the crucial one. And the critical answer is “yes”. Mathematically, it has to to be, for the masses.

If the Fed could prevent stock market collapses why didn’t it do so in 2008? Why did Japan have close to three lost decades? Why couldn’t China halt the share plunge recently?

Does only the Fed have the magic wand?