In response to Jane’s Defense vs. Colonel Cassad: Someone Seriously Wrong, a close friend wrote …

Jane’s has been in business giving good advice for a century and could only do so by giving good advice.  Everything I have read suggests that the rebels (who include a lot of Russian paramilitary) would have been about finished this past week, but for supplies coming in through Russian interference. The captured Russian soldiers two days ago day only make the interference look more like direct assault.  Colonel Cassad, on the other hand, appears to be a complete whack job who idolizes Joseph Stalin and thinks Putin is to weak.

The political views of Colonel Cassad, whether you like him or despise him are irrelevant. His military analysis, denied by Kiev for the past two weeks, took precisely one more day to prove correct.

March to the Sea

For several days, I have been commenting on a rebel “march to the sea”, and the meaning of that march. On Wednesday, mainstream news verified the accuracy of my reports.

For no other reason than Ukraine could no longer hide the truth, Ukraine finally admitted what it could have and should have admitted a week ago: Rebels extend fight against Kiev to Ukraine’s south coast

Pro-Russian rebels entered a new town in southeast Ukraine on Wednesday while Kiev accused Russia of sending more troops into its territory, dispelling hopes of political progress after talks between the two countries’ presidents.

Rebels entered Novoazovsk, a strategically important town on the Sea of Azov 10km from the Russian border, the town’s mayor announced. It is on the road linking Russia to Crimea, the peninsula Moscow annexed in March, and is some distance south of the existing rebel strongholds of Donetsk and Lugansk.

The fighting around Novoazovsk creates a de facto new front in the conflict, close to Mariupol. This coastal city has been used by Ukraine as a logistical base to support its campaign against the rebels further north in Donetsk and Lugansk.

It could also signal that Moscow is seeking to establish a direct land link under its control between Russia and the seized Crimean peninsula nearly 300km away.

“Our forces are currently engaged with Russian forces with tanks that are on the territory of Ukraine near . . . Novoazovsk,” said Oleksander Danylyuk, an adviser to Ukraine’s defence minister. “We are also increasingly facing genuine Russian soldiers in addition to mercenaries armed by Russia on the other fronts in the Donetsk and Lugansk regions.”

I am convinced this talk about direct military involvement by Russia is 90% hype if not more. A few soldiers captured and paraded about does not change that picture.

Is Russia looking the other way on military supplies? Of course. And if one understands Russia’s fear of NATO, one should understand why.

Is it OK for the US to invade Iran, but Russia to not send supplies to Russian speaking neighbors right on its border?

Would the US allow missiles in Cuba? Should Russia allow them in Ukraine?

Jane Caught With Pants Down

Simply put, Jane got caught with her pants down, parroting complete nonsense from Kiev.

Was that good advice? Good intelligence? For whom? By whom?

The excuse that the war would have been over without Russia is ridiculous. Shouldn’t Jane have known of that support?

There are no excuses, Jane clearly got caught parroting the view of Kiev.

I found this sentence by Jane particularly humorous: “Ukrainian army and national guard units appear to be better trained and motivated than the units that first engaged the rebels in the early days of the crisis back in April.”

And these paragraphs are quite ironic …

What has surprised many observers is the reluctance of Russian president Vladimir Putin to intervene directly to prop up the self-proclaimed People’s Republics of Donetsk and Lugansk. So far the Russian armed forces do not seem to have been sent to fight openly alongside the rebels, although NATO claims Moscow is regularly allowing resupply convoys to cross the border.

This might indicate the threat of Western economic sanctions is having some impact, but it is more likely Putin is concerned about public reaction to heavy casualties among conscript soldiers in regular army units.

Two days ago I questioned whether Jane was wrong or Colonel Cassad. We now have the answer.

Today, and in reference to Russian troops, I ask: “Is Jane’s Defense right or Kiev?”

Let’s move on. I have a new map update and history suggests Jane better pay attention. 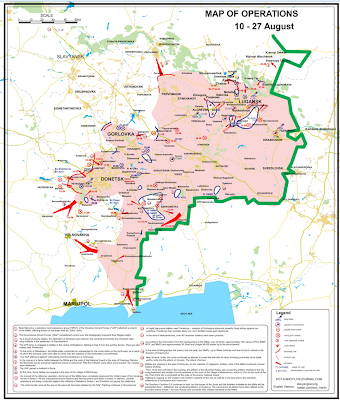 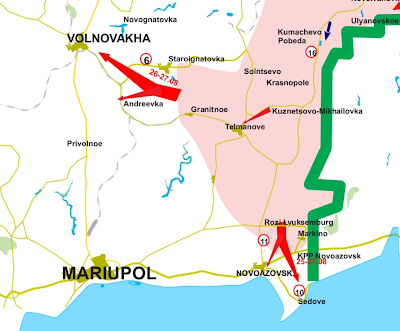 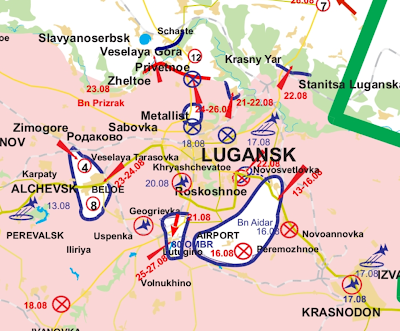 We are currently witnessing an epic and in its own way historic event. The Ukrainian regular army and the punitive battalions are suffering a catastrophic defeat to the south of Donetsk. Only a short time ago the Republics were in dire straits: the DPR was hanging only by a thin supply thread, which the Ukrainian army was attempting to sever near Shakhtersk and Krasnyi Luch; the summit of Saur-Mogila has been abandoned, and Bolotov’s counteroffensive had failed to bring decisive victories.

To many it seemed that the Militia forces were on the ropes and just about to break, which would have led to the collapse of Novorossiya and a military victory for the fascist Junta. …

The Junta did not conceal its plans, and the preparations for the assaults on Shakhtersk and Lugansk were openly discussed. The bravura level of the Junta’s triumphant reports that came with each new breakthrough of its mechanized battle groups was off the charts.

It’s a lengthy and worthwhile read. Here are some more snips towards the end.

This new frontline is a gaping hole for the Junta, which has nothing to plug it with. The remnants of its forces, including Battalion Azov, fled to Mariupol, in the process abandoning several settlements virtually without a shot. As a result, the Militia rolled directly into the suburbs of Novoazovsk and onto the approaches to Mariupol. On the Junta’s side, there is virtually no front from the area south of Starobeshevo and up to Novoazovsk. The Milita’s lack of sufficient troops is the only thing slowing down the looming catastrophe.

Overall, it still is not quite clear how the Junta intends to avoid a complete defeat here. It will clearly not be able to restore the previous frontline, and the only question is whether the surrounded troops will be able to break out (and as they will have to do so on their own, it is likely that they will have to make that decision as soon as possible), and where the Militia’s offensive will stop – they still have fairly limited forces and they are now routing a larger force with a smaller force.

In the meantime, the once-solid front, which stretched from Marinovka to Yelenovka has now broken up into separate pockets of resistance with intercepted supply lines. After this disaster it became absolutely clear that the Junta does not have the capacity to destroy Novorossiya. By squandering the most combat-capable brigades in systematic offensive operations, the Junta sustained enormous losses and at the same time suffered a crushing, purely military defeat. The southern front has collapsed. Novorossiya shall exist!

Note: These snips came out ahead of the meeting between Putin and Ukrainian President Petro Poroshenko.

1. The situation has become precarious for the Junta in the area of ​​Novoazovsk and Mariupol. The Militia forces that penetrated from the north, and also those that moved along the border with the Russian Federation, created an operational crisis in the area of Novoazovsk, which in itself implies a threat to Mariupol. The panic on the Junta-aligned websites is not without foundation. As we mentioned earlier, there are very few combat-capable units there – a hodgepodge of police, punitive troops, border guards and air defense personnel, clearly not the forces you can repel a serious Militia offensive with.

For now the Junta is saved by the fact that the Militia forces there are not so big and they are not achieving decisive results yet, although the threat has already become very serious.

[Mish: Let me interject here. Cassad does not offer a one-sided analysis. He was not a happy camper at the onset of the Kiev offensive, and he cautions repeatedly about over-euphoria. He notes that as of now, rebels have insufficient troops to take Mariupol, at least right now.]

Currently, the Junta faces a very unpleasant prospect – either it has to urgently find reserves for the new front that suddenly opened up, or else it risks losing Novoazovsk and may face a real threat of losing Mariupol. In general, this blow is very unpleasant for the Junta, and it is further complicated by the problems to the south of Donetsk.

2. The gap in the front to the south of Amvrosievka, which the Junta recklessly didn’t plug for a few days, led to a disaster as expected. Not only did the Militia use the gap to advance to Uspenka and Novoazovsk and to create a threat for Mariupol. Also, the Junta units that were drawn into the battle for Ilovaysk have spent their reserves, which resulted in a Militia advance onto those Junta battle groups’ communications and the threat of attacking Militia units taking Amvrosievka. An encirclement of a kind emerged, which is already the 3rd encirclement in the south. Although this one is more of a partial encirclement – the Militia intercepted a number of important roads to the south of the main forces of the Junta battle group, but there’s no talk yet about a complete encirclement across all paths, because the Militia are actually encircling a larger force with a smaller one. In the next few days the Junta will try to break out of this critical encirclement, but if they fail to do this, then the first two southern cauldrons will be chump change compared to this one.

3. The encirclement by Dyakovo is still not eliminated, the encircled forces were given standard terms – leave and be interned in Russia, handing over the vehicles and weapons – but their leadership refuses to accept those, for now. But overall, the elimination of that encirclement is just a matter of time and losses. Of course I would prefer for the Militia to get the vehicles.

The very nature of the events in the Donbass is changing and now the argument is starting to shift from “will Novorossiya survive?” to “what consequences will there be of the Junta’s defeat in Donbass?”;  including the question of “what borders would be the starting point of negotiation?”. Perhaps the first diplomatic overtures will happen tomorrow in Minsk.

By the way, it’s safe to figure that whatever the losing side admits (in recent weeks, Kiev), the losses are way worse.