By Patrick Kowsmann & Jeannette Neumann at the Wall Street Journal

As interest rates in Europe fall near or below zero, lawmakers and consumer advocates in Spain and Portugal are attacking an ancient tenet of finance by insisting that lenders can owe money to borrowers.

Banks in the two countries, struggling to recover from recessions that shook their financial systems, are fighting back, with billions of dollars in mortgage interest payments potentially at stake.

Portugal’s central-bank governor, in a reversal, has rushed to defend the banks against a proposed law that would require them to pay borrowers when interest rates turn negative. Banks in both countries are rewriting new mortgage contracts to warn homeowners that they could never profit from subzero rates.

In Spain and Portugal, banks typically tie interest rates on mortgages to the euro interbank offered rate, or Euribor, a fluctuating rate banks pay to borrow from each other. In addition, interest rates in both countries include a fixed percentage of the loan, called the spread. In much of Europe, by contrast, fixed mortgage rates are common. 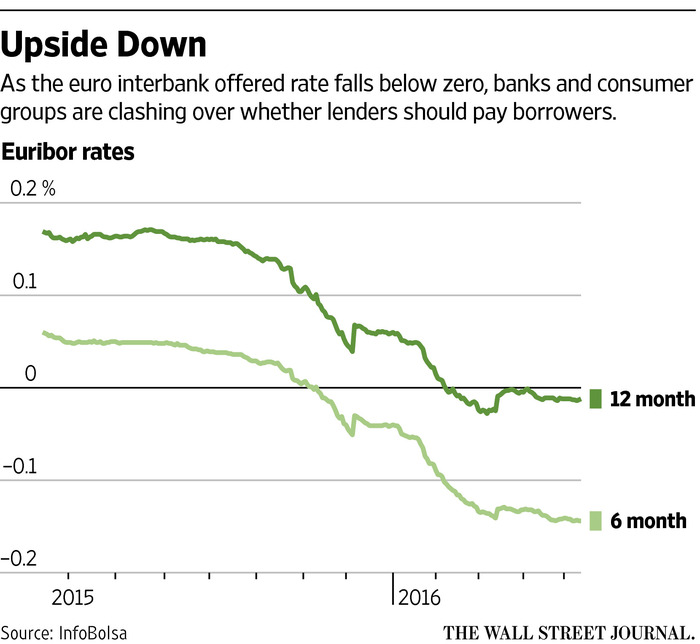 The vast majority of Spanish and Portuguese mortgage holders still pay interest, because Euribor hasn’t dropped enough to wipe out the spreads. But while lenders consider further steep drops unlikely, they are taking steps to protect themselves just in case.

Europe already has a precedent: Banks in Denmark are paying thousands of borrowers interest on their home loans, nearly four years after the central bank introduced negative interest rates. Danish banks have increased some fees to compensate but never mounted serious legal objections.

In Spain and Portugal, bank executives said they would pay borrowers when pigs fly.

“In no case could a client receive interest payments” because that would go against the nature of a loan, Banco Bilbao Vizcaya Argentaria SA Chief Executive Officer Carlos Torres Vila said at a news conference in April after the bank released its earnings. In the most extreme case, he said, a borrower would pay zero interest.

Portuguese bank executives are similarly categorical in private. In the few cases in which interest rates went negative, Portuguese banks lifted the rate to zero.

Consumer groups said banks are contractually obligated to stick to the terms of a variable-rate loan, which by definition rises and falls with changes in interest rates. If rates fall far enough below zero, these groups said, the banks should make interest payments to borrowers, just as they would charge clients more if interest rates rose.

The Left Bloc, an ally of Portugal’s Socialist government, introduced legislation in January that would oblige lenders in such cases to pay up. As Parliament debates the bill, Lisbon-based consumer rights group Deco has instructed customers to check their loan contracts and complain if they don’t benefit from negative rates.

“It was the banks that chose to fix loan rates to Euribor, not customers,” Paulino Ascenção, a Left Bloc lawmaker, said. “It’s a matter of principle and trust to follow the rules of the contracts.”

Portugal’s central-bank governor, Carlos Costa,stepped into the fray last month, reversing an earlier position and siding with the banks.

Last year, he had issued a recommendation that lenders apply negative Euribor in calculating loan interest, which would be following the rules of the contracts. Back then, Mr. Costa told lawmakers last month, he couldn’t have imagined that Euribor would keep falling.

Now that it has, he argued, the banking system is at risk.

Portuguese banks would take a collective €700 million ($796 million) hit to their interest margins annually if the country’s six-month Euribor rate, which now stands at minus 0.144%, were to fall to minus 1%, the central bank estimates. Even if banks could limit interest rates to zero, they would lose €500 million from the difference between what they pay to depositors and what they make from lending, the central bank said.

“We have to find a fair balance between the expectations of the borrowers and the need to safeguard the stability of the financial system,” Mr. Costa told lawmakers.

He now advocates a zero-interest floor on existing loans. For new loans, he said, a negative Euribor rate should be calculated as zero, allowing lenders to fully profit from the spread. The government has yet to endorse his position, but banks have moved on their own to put it into practice.

In Spain, most mortgages are tied to 12-month Euribor, which is at minus 0.012%. That rate would have to fall a lot further to offset the lowest spread on mortgage loans, which were locked in at an average of 0.5% to 0.75% during the country’s property boom a decade ago.

In that event, Spanish bankers said two rulings—one by a Madrid city judge in 2014 and one by a Madrid provincial court last year—would give legal backing to their refusal to pay interest to borrowers.

Midsize Spanish lender Bankinter SA did pay interest last year on mortgages tied to the Swiss franc iteration of the London interbank offered rate, or Libor. A Bankinter spokesman called the payments a one-time concession to a small number of clients, not a legal obligation.

Two Spanish consumer groups, OCU and Adicae, dispute the bankers’ views of the court rulings. Both argue that it is the essence of a variable-rate loan to follow interest rates whether they rise or fall into negative territory. If Spanish law favors the banks, consumer advocates said, why are some starting to require new borrowers to handwrite a declaration of understanding that they will never receive interest payments from the lender?

A lawyer for a big Spanish bank said lenders are taking extra pains to avoid confusion after judges, in cases unrelated to negative interest rates, ruled that some mortgage contracts hadn’t clearly stated that the bank was setting an interest-rate floor.

Juan Ignacio Sanz, a lawyer and banking professor at Spain’s ESADE business school, said: “The banks included these clauses because they had doubts.”

Source: A Battle Brews Over Negative Rates on Mortgages – the Wall Street Journal