ECB Has No Choice, As Forces of Debt Collapse In Europe Keep Building

Bank assets in Europe remain within the same range they have been in since December 2014. Total assets in European banks rose by 0.2% in March after a 0.7% gain in February.

This hardly justifies the ECBs recent crowing that their bond purchases (QE), targeted lending (TLTRO), and negative interest rates (NIRP) have stimulated loan growth. Bank assets remain down by 9.7% since mid 2012 and down 3% from a peak in early 2015, after the first TLTRO operation. They continue to move cash assets out of the continent as fast as the ECB can print it.

Bank loans have hardly grown since NIRP and QE were instituted. Loan growth has been stagnant at the same time as the ECB was adding €2 trillion in assets to its balance sheet. The ECB continues to buy €65-70 billion in bonds per month from the European banking system. 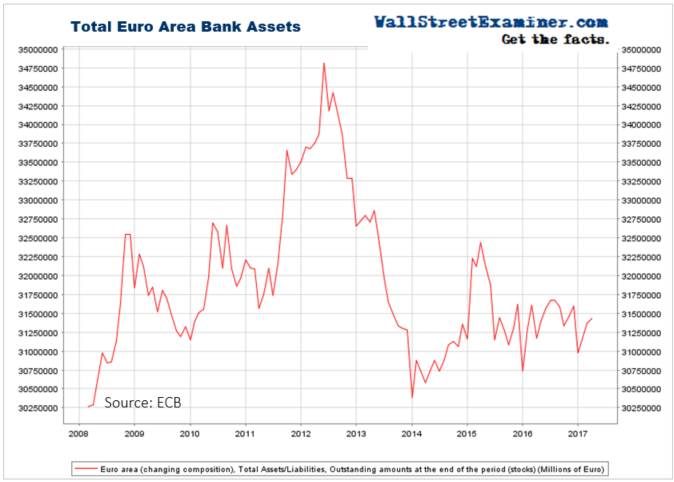 QE and NIRP have been a gross, unmitigated failure at achieving what they purportedly were supposed to do. The ECB’s solution? Keep doing it. In fact, do more of it. Stick your head in the sand. Refuse to concede to the facts and the evidence. And then on top of that, claim that the policy is working! Even though the evidence says just the opposite. It is not working to stimulate credit and business.

Total bank loans rose by €3 billion or 0.03% in February after rising by €25 billion or 0.2% in January. The year to year growth rate was a rip roaring 0.4%. The total outstanding is still down 4.4% from the 2011 peak. It has gained only 1.5% since the ECB began imposing negative interest rates (NIRP) in September 2014 (announced in June 2014). The policy has utterly failed to stimulate credit expansion.

Total bank loans rose by 0.5% in March after virtually no gain in February and 0.2% in January. The total gain for the first quarter was 0.7%. Hardly a reason for the ECB to proclaim , “Great success!” Unless they were channeling Borat.

I guess that’s what Mario Draghi considers success. To me, their posturing sounds like a matter of building a case for picking up their marbles and ending the game. Nobody wants to play. The total outstanding is still down 3.7% from the 2011 peak. It has gained only 2.1% since the ECB began imposing negative interest rates (NIRP) in September 2014 (announced in June 2014). The policy has utterly failed to stimulate credit expansion. 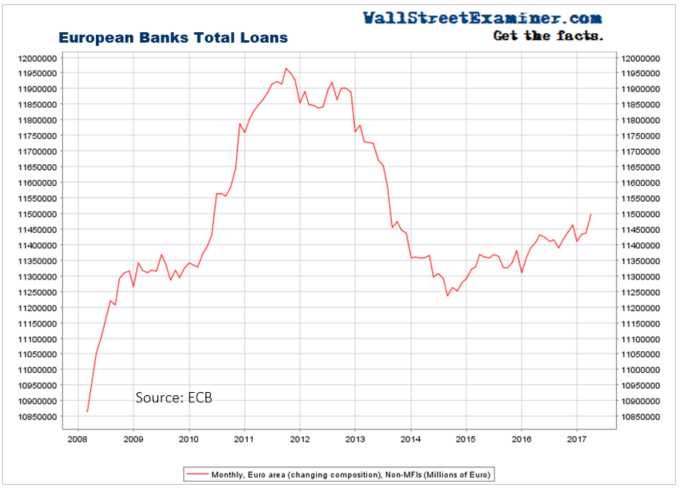 Contrast that 2% growth with the current US loan growth rate of 4.1% and 17% total loan growth since the Fed ended QE in October 2014, just as the ECB was cranking up its QE and NIRP programs.

Or desperate. The ECB may be deathly afraid of what would happen if they stopped injecting cash into the system every month. The €70 billion a month might be just enough to give the system the appearance of stability, if not health. The ECB is like the methadone clinic of the European banking system, sustaining the addict indefinitely with a maintenance dose of the drug.

The gains in bank lending in Europe have been entirely in household borrowing. Household debt to banks rose 0.4% in March, bringing annual growth to 2.4%. The annual growth rate was +2.2% a year ago, but zero early in 2015. I guess that’s progress. In any event, it’s weak growth, indicating that few Europeans want to borrow regardless of how low rates are. Europeans have no confidence in their economies. 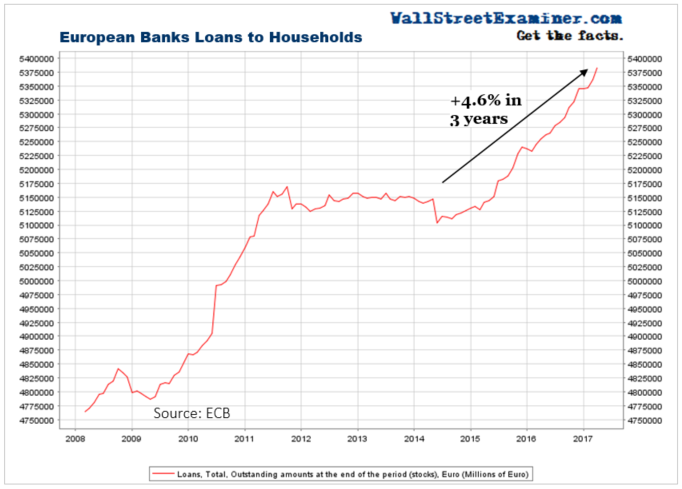 Household revolving credit remains in a vicious downtrend despite another dead cat bounce of+0.4% in March. Revolving credit is down 4.7% year over year and down 11.9% since NIRP started. Hey, wait a minute! I thought negative interest rates were supposed to stimulate borrowing! Apparently Mario Draghi forgot that to avoid negative carrying costs of deposits, or on holding sovereign debt, people might use their deposits to pay off debt. 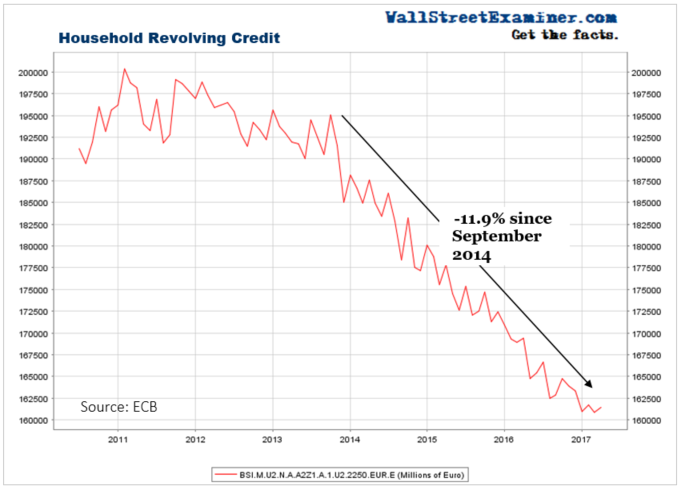 The data on revolving credit supports that. Revolving credit to households has been declining steadily since 2011. Many Europeans are opting to pay off debt in an environment of stagnant growth, political upheaval, and the massive failure of economic central planning. Time and time again the financial machinations of the ECB have failed to stimulate growth. Europeans as a group seem to have a much greater sense of recognition of just how massive and intractable Europe’s problems are. Kicking the can down the road is not a policy of solutions.

The ECB tracks business loans in a category called Loans to Nonfinancial Corporations. In the US we call them Commercial and Industrial Loans. That category of loans in the US has been growing by leaps and bounds for the past several years. US businesses borrowed heavily to buy back their own stock. That has been slowing, but again, Europe is pathetic in comparison. 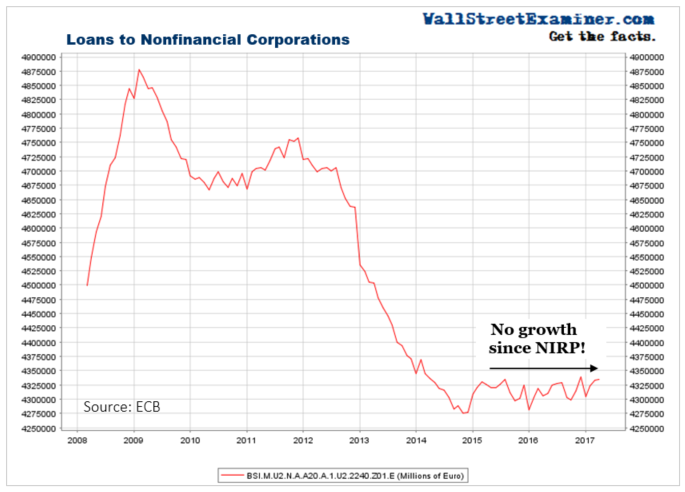 Business loans to nonfinancial corporations (NFC) (similar to the Commercial and Industrial Loans stat for US banks) rose by 0.03% in March. That’s 3 hundredths of a percent, or zero after rounding. Total loans to NFCs are in exactly the same range that they were in immediately before the ECB started NIRP. Here again, NIRP was meant to stimulate business borrowing… FAIL.

Business revolving credit has bounced since the beginning of the year. It gained 0.5% in March, but is still down 5.8% year over year. 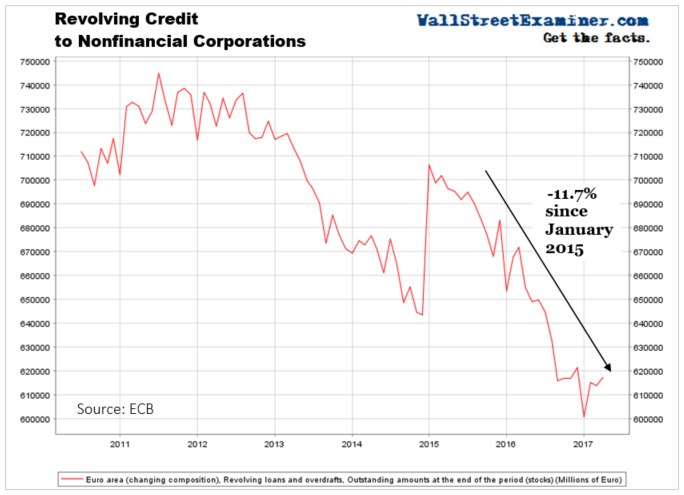 The 60-billion-euro spike in December 2014 coincided with the first TLTRO issue. The banks apparently arranged for their biggest customers to increase their lines and take some of it down. That way the banks could get the TLTRO bonus from the ECB. No doubt they kicked some of that back to their borrowers. Borrowers wasted no time in paying back money they had no need for and no use for. If ever there was an example of pushing on a string, the TLTRO is it. It attempts to force feed free money that isn’t needed into the system.

The fact that these loans were so quickly repaid, and then some, is a sign of just how little confidence European businesses have in the economy there. As the European banking crisis grinds on, credit liquidation accelerates, destroying capital. The ECB may have no choice but to continue QE just to avoid a death spiral of collapsing credit that would destroy not just the European banking system and markets, but the rest of the world as well.

In the end, the question is whether that can work. It has certainly worked for the US stock market, as ECB printed money leaves Europe and flows to the US as fast as they print it. But if Europe shows no signs of life, this game too will prove to be a dead end as traders slowly but surely lose confidence in the ECB’s con game.