The ECB continues to buy €65 billion per month in bonds from European banks. But the European banking system is still not growing. It has no more assets now than it did when QE and NIRP kicked into action in September 2014.

The policy of QE bond purchases was meant to stimulate European credit and economic growth. Instead, it has been having the opposite effect. Total assets in European banks rose by just 0.7% in January after falling by 2% in December. They are down by 11% since mid 2012.

Most importantly they haven’t grown at all since NIRP and QE were instituted. They were actually slightly lower at the end of 2016 than they were in September 2014 when NIRP was first implemented. The uptick in January put the current level of assets just €66 billion (0.2%) above the September 2014 level. Since that time the ECB has added €1.8 trillion in assets to its balance sheet.

QE and NIRP have been a gross, unmitigated failure at achieving what they purpotedly were supposed to do. The ECB’s solution? Do more of it. 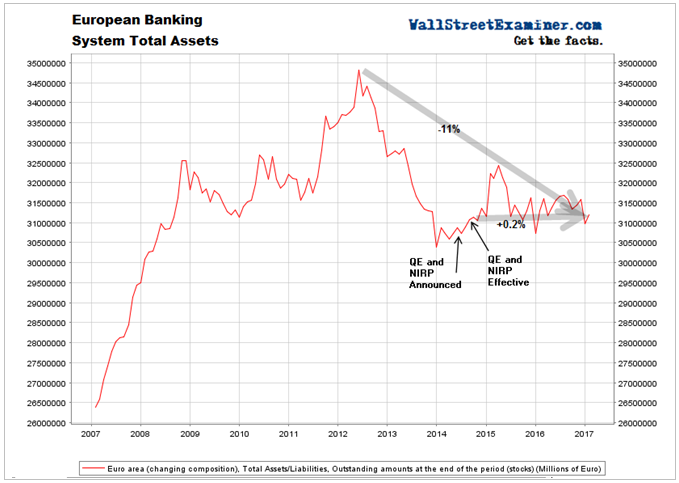 Total bank deposits have declined by €59 billion since they peaked in April 2016. Considering that the ECB added €808 billion to the banking system over that time, that means 867 billion euros have either been extinguished or have been transferred out of the European banking system, probably mostly to the US. We’ll just have to give this another couple of months to see how this rebound plays out. 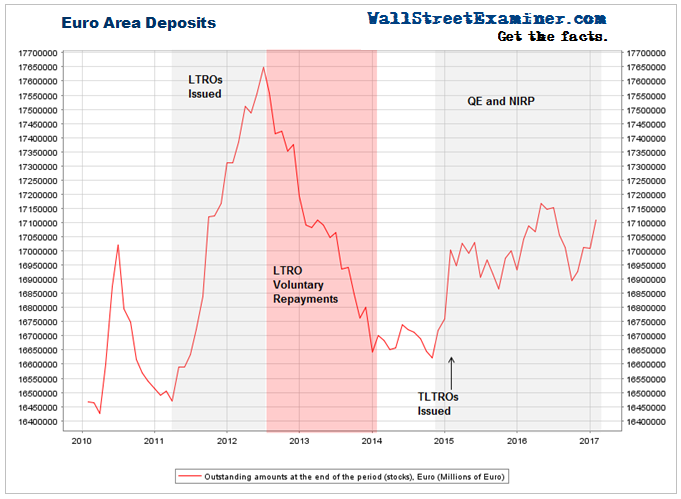 This continued a rebound from the September 2016 low. Why are more Europeans keeping their money at home?  Could it be…? Satan? Or Trump? The rebound really picked up steam after the election and then again last month, which coincided with the inauguration. I’m just speculating of course.  There appears to be a seasonal aspect to this over the past 3 years, although I have no idea why that would be.  We’ll just have to give this another couple of months to see how this rebound plays out.

I would also speculate that a breakout in European deposits above the April 2006 peak would be a bearish sign for the US. Cash inflows from Europe have powered much of the US rally. If European investors and businesses decide that it’s less risky to keep their cash at home, then that source of demand for US stocks and bonds will diminish.  It hasn’t happened yet, but it’s something to watch for. 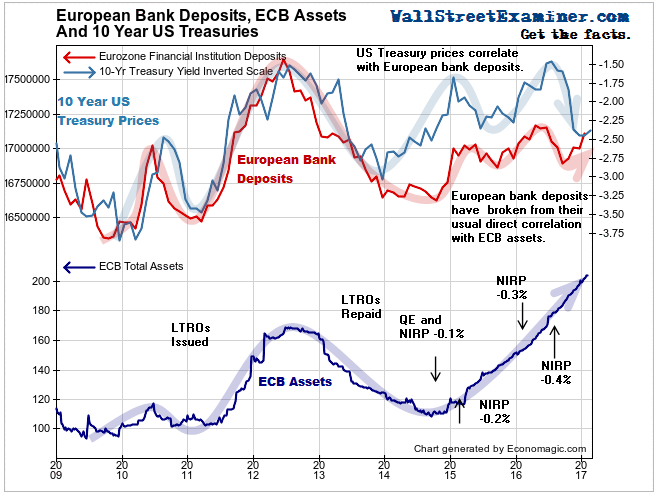 Deposits in Germany surged in January, edging to a new high in the process. This is the big driver of the increase in total deposits in Europe. But it is a pattern we have seen before from the German banks. Spikes are usually largely reversed within a few months. Also, the chart scale makes this rebound look bigger than it is. The annual growth rate is now still just 1.8% after this “massive rebound.”

Again I would speculate that if this continues, Germans are pulling cash out of the US, largely by selling their US investments.

After the completion of the LTRO paydowns in 2013, German bank deposits bottomed at 4.48 trillion euros. They’re now at 4.68 trillion, a gain of 3.5% in 3 1/2 years or about 1% per year. That compares with the growth of US deposits at around 7-8% per year through mid 2015. That declined to 3.5% in early 2016, but has lately returned to around 4.6%.  If US deposit growth slows as German deposits rise, I would take that as a bearish indication for the US. 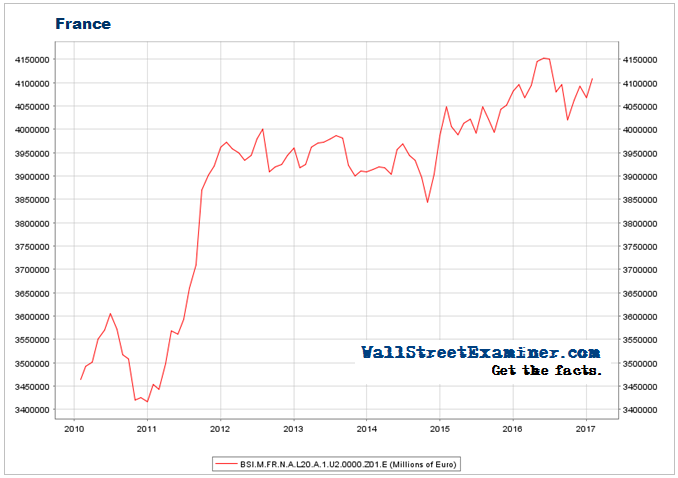 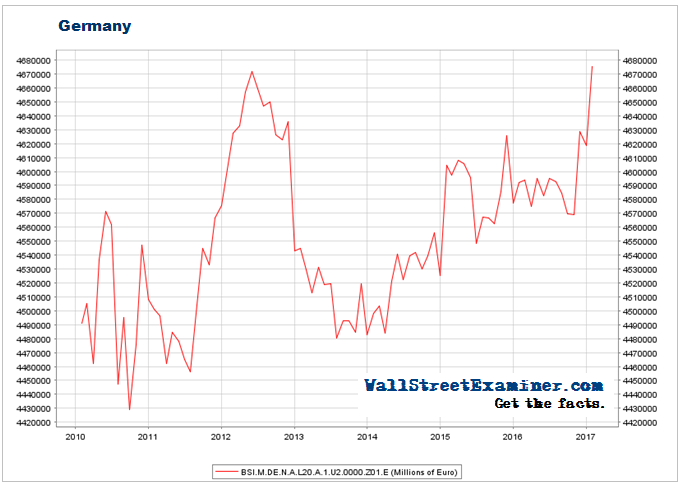 French bank deposits have bounced, but are lagging the growth seen in Germany since October. Again, politics may be playing a role in that. The French face an uncertain outcome in a national election campaign now under way. It includes an ultra nationalist who wants to leave the Euro, with a real chance of winning.  Germany is also facing elections, but its candidates are more mainstream, Chancellor Merkel facing a mainstream party candidate. Neither would upset the status quo, whereas LePen in France is seen as a real threat by the French mainstream establishment.

Unlike total bank deposits, household deposits have only one direction–up.

While total deposits have had hardly any growth, German (and other European) households continue pouring money into German bank accounts. Why they are doing that is a mystery, but the simplest explanation is that they have no reasonable alternatives, especially for depositors in basket case countries like Portugal, Spain, and Greece. 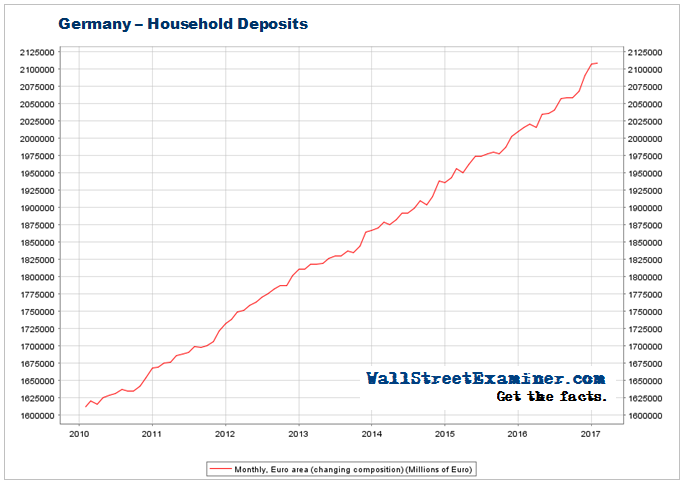 One group that has a choice of how much cash to hold and where to hold it, is financial institutions. The banks hold cash in other banks. Smaller banks in particular may have deposits in big banks. They’ve been voting with their feet for 5 years, constantly reducing their cash held in other banks, sometimes by paying down debt, sometimes by moving it offshore. These deposits did jump in January, but they did not break the downtrend channel from 2014. The bounce looks just like January 2015.  It may be seasonal.  But the trend speaks clearly. The banks don’t trust each other, and neither should you. 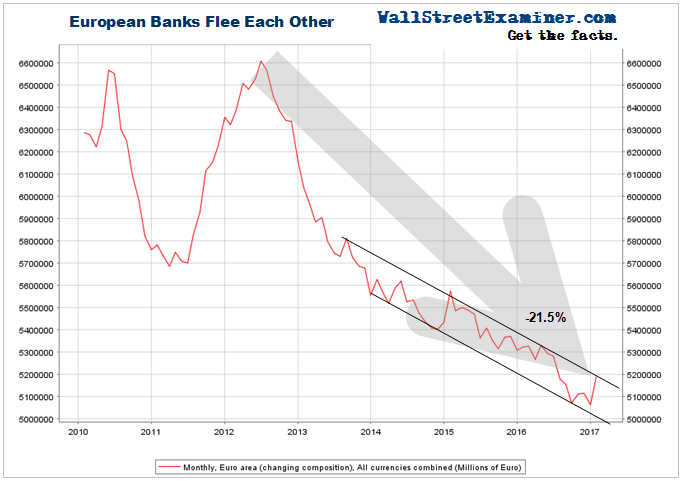