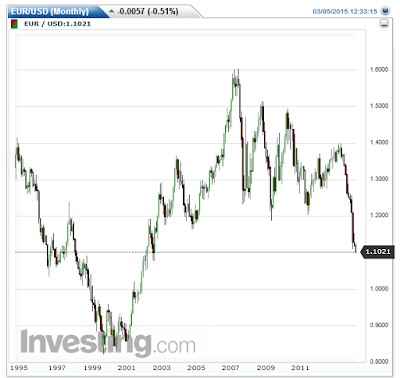 Apparently this is a “success” even though the ECB was hell bent on “saving the euro” in 2012 when one euro was worth $1.20 or so.

Mario Draghi’s timing looks impeccable. Only six weeks after pushing through quantitative easing in the face of fierce resistance from Germany, the European Central Bank president has now called time on the region’s crisis.

Mr Draghi’s message on Thursday was clear: the eurozone’s economy had, with the help of QE, turned a corner and was on the path to a meaningful recovery.

The central bank on Thursday signed off on growth projections of 1.5 per cent for this year, 1.9 per cent in 2016 and 2.1 per cent in 2017. That was much better than it had expected three months ago.

“Borrowing conditions for firms and households have improved considerably,” Mr Draghi said at a press conference in Nicosia, the Cypriot capital, where the meeting of the governing council was held.

“This was Mr Draghi at his chest-thumping best,” said Marc Ostwald, of ADM Investor Services International. “He boasted of the ECB’s success in bringing down long-term interest rates and corporate lending rates even before the actual QE programme has started.”

Not everyone at the press conference agreed with the ECB’s rosy assessment of the economic outlook, however. Mr Draghi faced several angry remarks from Greek journalists, who said the ECB was not doing enough to help their country, which despite the better outlook in the region as a whole is likely to have fallen back into recession in the first quarter of 2015.

Mr Draghi challenged their claims, saying the ECB was doing plenty to help the member state most ravaged by the region’s crisis, and took the rare step of publicly revealing that the governing council had extended the amount of emergency liquidity assistance provided to Greece’s banks by €500bn. The details of extended loan agreements are shrouded in secrecy, with the central bank rarely revealing the terms of the emergency loans.

Yep. That 500 billion number was so preposterous I had to look it up. Doing so turned up ECB Raises Greek ELA Funding Ceiling by 500 Million Euros.

Albeit marginal, this increase indicates the continued dependence of the Greek banks on the ELA mechanism for liquidity, which is more expensive than the ECB.

The ECB will reconsider the request of the Greek banks to redefine the ELA funding ceiling in 15 days, although the possibility of an intervention next week cannot be ruled out, as a critical Eurogroup meeting is scheduled for Monday, March 9.

Even €68.8 billion is enough to worry about don’t you think? What about €240 billion in bailout funds? And what about €7 billion in paybacks to the ECB and IMF due between now and August?

Not to worry, the Eurozone crisis is over. How do we know? The answer Draghi says so. It’s “impeccable timing“.