By Lance Roberts at Street Talk

Since the end of the financial crisis, there has been an ongoing debate about the economy. However, the debate I am speaking of is not between investors and Wall Street, but rather between economic theory and “Main Street” reality.

Over the last few months, in particular, economic and media “experts” have become more vocal about the ongoing detachment between economic theory and actual economic activity. The ongoing hope, as point out by Myles Udland recently, is “this time is different:”

“Right now, this ratio is spiking, indicating that businesses in the US are accumulating a stockpile of goods(this ratio measures how many months it would take businesses to sell down their current stash of stuff).

So the most basic question to answer is: are these inventories being accumulated because businesses can’t sell these goods or because they’re anticipating selling them soon?” 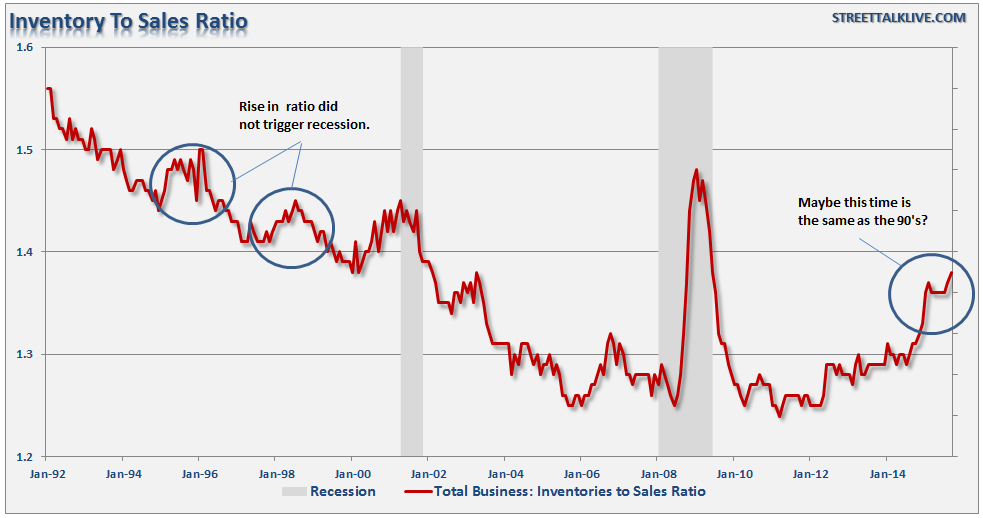 “But if businesses think that the long-awaited surge in consumer spending that’s supposed to follow the decline in gas prices over the last year is finally coming down the pike, then it would make sense to be prepared to this influx of spending. Or more accurately, it made sense three or six months ago to increase futures orders in anticipation of a big holiday shopping season.”

Here is the problem that continues to elude academic theory; falling gasoline prices has no “net effect” on economic growth. As I explained previously:

“If I spend less money at the gas pump, I obviously have more money to spend elsewhere. Right?

The problem is that the economy is a ZERO-SUM game and gasoline prices are an excellent example of the mainstream fallacy of lower oil prices.

Now, the argument is that the $16 saved by the consumer will be spent elsewhere. This is the equivalent of “rearranging deck chairs on the Titanic.”

Increased consumer spending is a function of increases in INCOME, not SAVINGS.Consumers only have a finite amount of money to spend. Let’s use another example:

Now, economists quickly jump on the idea that because he spent $20 on roses, there has been an additional boost to the economy. However, this is false. John may have spent his money differently this past week but here is the net effect on the economy.

Graphically, we can show this by analyzing real (inflation adjusted) gasoline prices compared to total Personal Consumption Expenditures (PCE). I am using “PCE” as it is the broadest measure of consumer spending and comprises almost 70% of the entire GDP calculation. 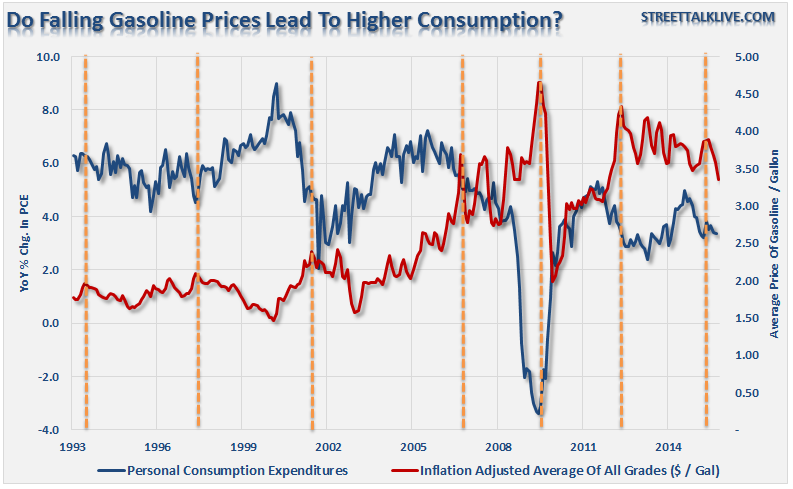 What is missed in the simplistic thought process of “Lower Gas = Higher Spending” are two important points:

The Same Or Not?

If the inventory build is going to be “ultimately” consumed, we should be able to look at the consumption side of the equation for clues. 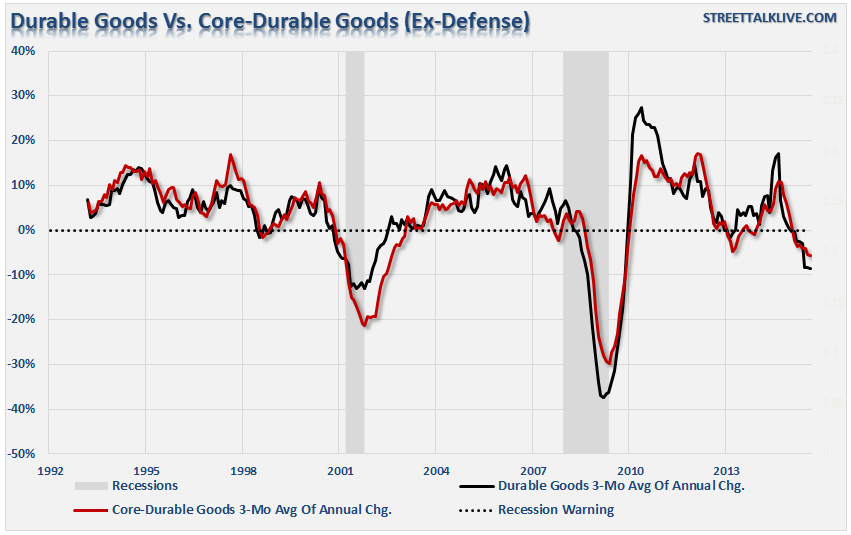 The difference between the current economic backdrop, and that of the 1990’s, is that durable goods orders never substantially declined into negative territory. The strength in durable goods orders in the 1990’s led to “inventory cycle builds” that were ultimately consumed by an economy that was growing at roughly 4% on average.

Currently, durable goods orders have fallen significantly into negative territory as inventories of unsold products builds. With an economy that will likely turn in growth of below 2%, the economic backdrop to “absorb” such a large inventory build is not readily available.

However, let’s look at the consumer specifically with respect to “retail sales.”  We also find a substantial difference between today and that of the 1990’s as well. 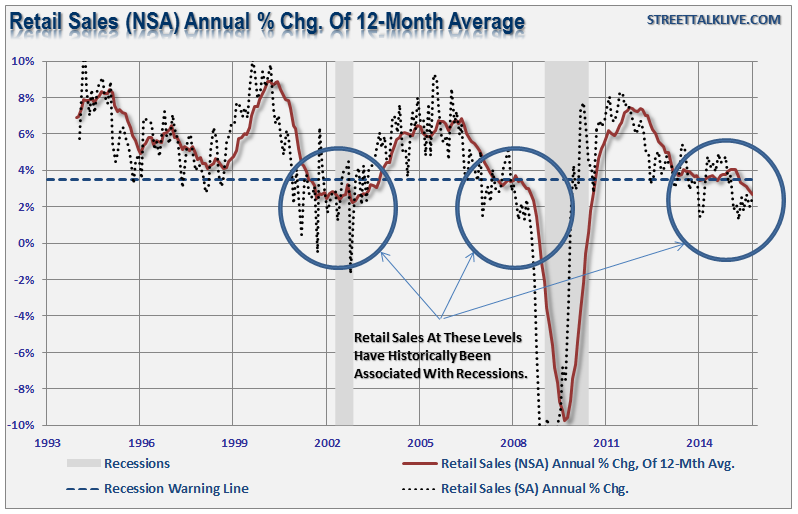 Again, we see that during the 1990’s retail sales never declined to levels more normally associated with economic recessions and weak consumption. Today, that is not the case.(in order to strip out the “seasonal adjustment fudging,” I have used a simple 12-month moving average of non-seasonally adjusted data.)

While there are many that continue to dismiss individual “economic data points” in order to promote a “bullish bias” for the equity markets, it is more important to accumulate the“weight of evidence.”

Currently, the economic data does show that the U.S. is in a recession. I am also not suggesting it is. However, with many economic indicators showing signs of weakness, combined with the global deflationary pressures sweeping back into the U.S., it is dangerous to ignore the mounting warning signs. Furthermore, by the time“revisions” to the economic data are made, it will be far too late for investors to make any difference.

The rising inventory levels, weak consumption, and plunging imports all suggest that the domestic consumer is much weaker than currently believed. The last time this combination of data points collided was just prior to the start of the last recession.

But then again, this is where “economic theory” collides with “Main Street realities.” Place your bets carefully.