In the wake of recent economic data, economists at the IMF and Deutsche Bank lowered their growth estimates.

Like a dog running in futile circles hoping to catch its tail, the IMF does the same thing with its perennially over-optimistic assessment of everything from emerging markets to the G7 economies.

The International Monetary Fund cut its global growth forecasts for a second time this year on Tuesday, citing weak commodity prices and a slowdown in China and warned that policies aimed at increasing demand were needed.

The Fund, whose annual meeting starts in Peru this week, forecast that the world economy would grow at 3.1 percent this year and by 3.6 percent in 2016.

The downgrades come after central banks in major industrial economies have cut rates to near zero and spent around $7 trillion in quantitative easing programs in the seven years since the global financial crisis. Despite these measures, investment, growth and productivity are stuck below pre-crisis levels and there is a lack of consumer demand.

ZeroHedge reports LaVorgna Throws In The Towel On US Economy As Deutsche’s “Weatherman” Cuts Growth Outlook.

One of the biggest permabulls on the Street is apparently turning bearish as Deutsche Bank’s chief US economist Joseph LaVorgna throws in the towel after taking a look at August trade date.

“We are reducing our estimates of Q3 and Q4 real GDP growth due to a significant deterioration in net exports. Based on the complete August international trade data—we received the advance report last week—US exports are expected to be unchanged in the quarter. This is down from a 5.1% annualized increase in Q2, which followed a -6.0% West Coast port- and weather-related decline in Q1. At the same time, imports are on track to increase 10.0% in the quarter, the fastest gain since Q4 2014. This would have the effect of widening the trade deficit by $64 billion, which equates to a negative 160 basis-point annualized drag on Q3 output relative to our prior estimate. Recall that in Q1 2015, net exports subtracted 192 bps off real GDP growth. In response to today’s trade data, we have lowered our Q3 real GDP growth forecast to 1.7% from 3.0% previously, and our forecast for Q4 real GDP growth has been trimmed from 3.0% to 2.3%. This has the effect of lowering 2015 real GDP growth, as measured on a Q4 over Q4 basis, from 2.6% to 2.1%. Moreover, we are cutting our 2016 forecast as well, albeit more modestly for reasons we will discuss in today’s US Daily Economic Notes. Real GDP growth for 2016 (Q4/Q4) is now projected at 2.7%, down three tenths from our earlier estimate.” 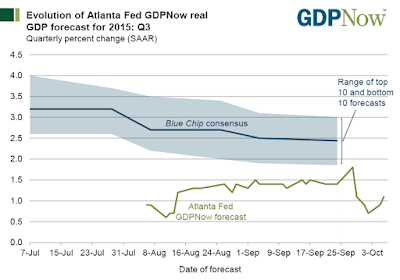 Note that the Atlanta Fed model was never above 1.8% whereas LaVorgna was at the top end of the most recent “Blue Chip” consensus.

More than likely, LaVorgna’s tail-chasing exercise is not over. 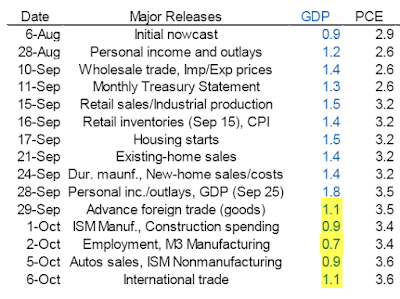 On September 29, the GDPNow model declined from 1.8% to 1.1% with the advance foreign trade numbers.

Following auto sales and today’s more complete trade numbers, the model forecast is back to 1.1%.

Economists not only chase “tails”, they also chase “tales” with each “tale” a bit less optimistic than the preceding one, yet still too optimistic.