“Economists” Have No Clue——Q1 Actual Vs. Blue Chip Consensus

First quarter GDP came in at -0.7% pretty much in line with the Bloomberg Consensus estimate of -0.8%.

First-quarter GDP was revised down about as expected, to minus 0.7 percent vs expectations for minus 0.8 and compared with an initial reading of plus 0.2 percent. Updated source data made for a bigger negative contribution from net exports as imports spiked 5.6 percent from an initial gain of 1.8 percent. The change here is tied to the port strike and the sudden unloading of imports in March. A lower estimate for inventory growth was also a negative. Turning to demand, final sales were revised downward to minus 1.1 percent from minus 0.5 percent.

The first quarter was definitely weak, showing the first contraction since first-quarter 2014 when GDP fell 2.1 percent in another winter quarter affected by unusually severe weather. The Fed itself has been noting the risk that the pattern of first quarter weakness could reflect how the numbers are crunched by government statisticians to account for seasonal variations. This process may have exaggerated the underlying weakness in the quarter.

Where is GDP currently tracking? Early estimates were in the 3.0 percent range but, due to weak consumer spending, have been slipping to the 2.0 percent range.

Economists get zero credit for guessing this one correct. Their negative estimate was in arrears after consumer spending unexpectedly collapsed.

This is what the “Blue Chip” economists thought about first quarter GDP on April 2. 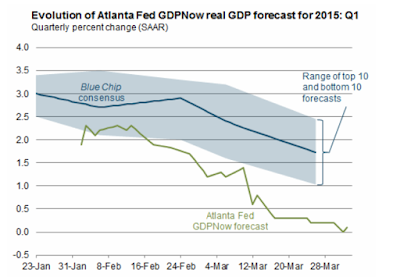 Note the “Blue Chip” consensus at the end of the first quarter was for 1.7% annualized growth. They were off by 2.4 percentage points.

Bloomberg notes the “port strike and the sudden unloading of imports in March.” Question of the day: Had they not unloaded merchandise in March, would they have done so in April?

Of course they would. So instead of whining about the sudden unloading in March, mentally shift -0.4% or so from first quarter to the second quarter.

That brings us to the today’s GDPNow Forecast. 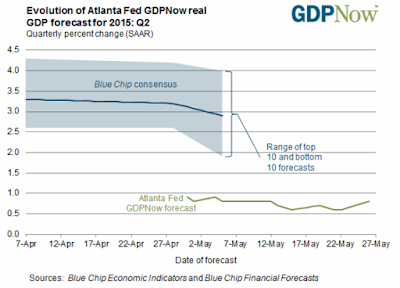 The “Blue Chip” forecasters who were off by a massive 2.4 percentage points at the end of the first quarter are now back at it.

Had that port strike settled in April, first quarter would still have been negative due to the revision in final sales to minus 1.1 percent from minus 0.5 percent. And second quarter GDP would now be barely positive according to the GDPNow model. 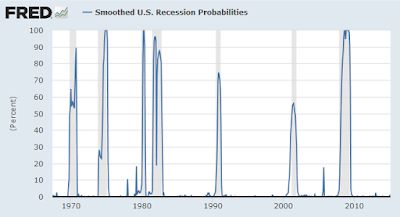 As of May first, the smoothed recession odds of recession stand at 1.2%.

On Verge of Recession

I think second quarter GDP will come in even lower than GDPNow. Consumers show no inclination to spend, despite economists persistent belief they will.

We are on the verge of recession, if indeed not already in one. First quarter GDP was negative and if for any reason second quarter GDP is negative the US will be in recession.

Regardless of whether or not one believes second quarter GDP will be negative, the odds are far better than 1.2%.

The smoothed recession odds model is clearly a joke.