By John Ficenec at The Telegraph

When the banking crisis crippled global markets seven years ago, central bankers stepped in as lenders of last resort. Profligate private-sector loans were moved on to the public-sector balance sheet and vast money-printing gave the global economy room to heal.

Time is now rapidly running out. From China to Brazil, the central banks have lost control and at the same time the global economy is grinding to a halt. It is only a matter of time before stock markets collapse under the weight of their lofty expectations and record valuations.

The FTSE 100 has now erased its gains for the year, but there are signs things could get a whole lot worse.

It is only a matter of time before stock markets collapse under the weight of their lofty expectations and record valuations.

China was the great saviour of the world economy in 2008. The launching of an unprecedented stimulus package sparked an infrastructure investment boom. The voracious demand for commodities to fuel its construction boom dragged along oil- and resource-rich emerging markets.

• Why China has devalued the renminbi

The Chinese economy has now hit a brick wall. Economic growth has dipped below 7pc for the first time in a quarter of a century, according to official data. That probably means the real economy is far weaker. 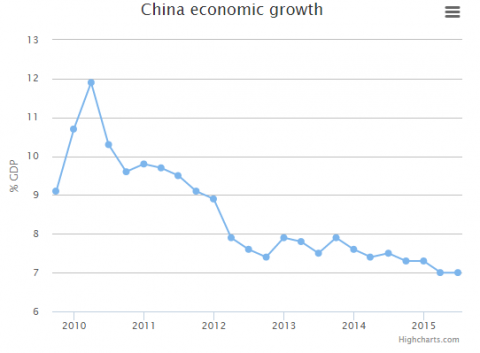 The People’s Bank of China has pursued several measures to boost the flagging economy. The rate of borrowing has been slashed during the past 12 months from 6pc to 4.85pc. Opting to devalue the currency was a last resort and signalled the great era of Chinese growth is rapidly approaching its endgame.

Data for exports showed an 8.9pc slump in July from the same period a year before. Analysts expected exports to fall only 0.3pc, so this was a huge miss.

The Chinese housing market is also in a perilous state. House prices have fallen sharply after decades of steady growth. For the millions who stored their wealth in property, it makes for unsettling times.

The China slowdown has sent shock waves through commodity markets. The Bloomberg Global Commodity index, which tracks the prices of 22 commodity prices, fell to levels last seen at the beginning of this century. 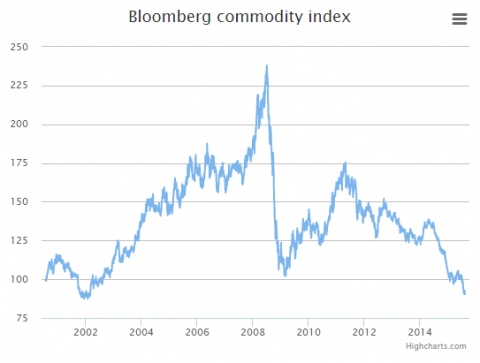 The oil price is the purest barometer of world growth as it is the fuel that drives nearly all industry and production around the globe.

• Andrew Critchlow: Oil companies travel back to 1986 in search of a future

Brent crude, the global benchmark for oil, has begun falling once again after a brief rally earlier in the year. It is now hovering above multi-year lows at about $50 per barrel. 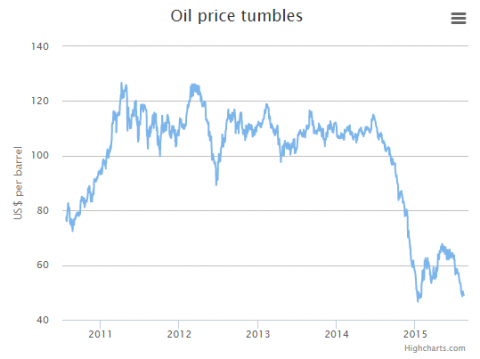 Iron ore is an essential raw material needed to feed China’s steel mills, and as such is a good gauge of the construction boom.

The benchmark iron ore price has fallen to $56 per tonne, less than half its $140 per tonne level in January 2014.

Billions of dollars in loans were raised on global capital markets to fund new mines and oil exploration that was only ever profitable at previous elevated prices.

Nowhere has this been felt more acutely than shale oil and gas drilling in the US. Tumbling oil prices have squeezed the finances of US drillers. Two of the biggest issuers of junk bonds in the past five years, Chesapeake and California Resources, have seen the value of their bonds tumble as panic grips capital markets. 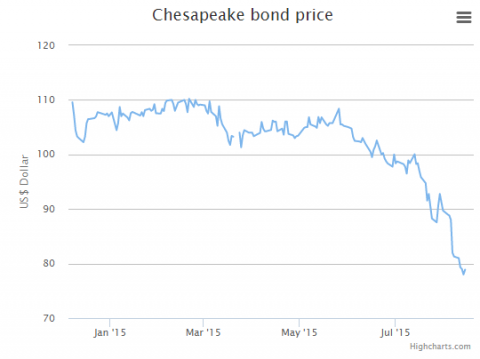 As more debt needs refinancing in future years, there is a risk the contagion will spread rapidly.

The great props to the world economy are now beginning to fall. China is going into reverse. And the emerging markets that consumed so many of our products are crippled by currency devaluation. The famed Brics of Brazil, Russia, India, China and South Africa, to whom the West was supposed to pass on the torch of economic growth, are in varying states of disarray.

• Is the global economy headed for another crash? Three signs to watch out for

• Regulators could be responsible for next financial crash

The central banks are rapidly losing control. The Chinese stock market has already crashed and disaster was only averted by the government buying billions of shares. Stock markets in Greece are in turmoil as the economy grinds to a halt and the country flirts with ejection from the eurozone.

Earlier this year, investors flocked to the safe-haven currency of the Swiss franc but as a €1.1 trillion quantitative easing programme devalued the euro, the Swiss central bank was forced to abandon its four-year peg to the euro.

As central banks run out of silver bullets then, credit markets are desperately seeking to reprice risk. The London Interbank Offered Rate (Libor), a guide to how worried UK banks are about lending to each other, has been steadily rising during the past 12 months. Part of this process is a healthy return to normal pricing of risk after six years of extraordinary monetary stimulus. However, as the essential transmission systems of lending between banks begin to take the strain, it is quite possible that six years of reliance on central banks for funds has left the credit system unable to cope. 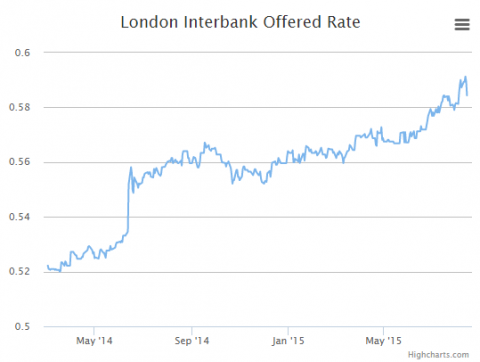 Credit investors are often far better at pricing risk than optimistic equity investors. In the US while the S&P 500 (orange line) continues to soar, the high yield debt market has already begun to fall sharply (white line).

Interest rates have been held at emergency lows in the UK and US for around six years. The US is expected to move first, with rates starting to rise from today’s 0pc-0.25pc around the end of the year. Investors have already starting buying dollars in anticipation of a strengthening US currency. UK rate rises are expected to follow shortly after.

The UK stock market is in its 77th month of a bull market, which began in March 2009. On only two other occasions in history has the market risen for longer. One is in the lead-up to the Great Crash in 1929 and the other before the bursting of the dotcom bubble in the early 2000s.

UK markets have been a beneficiary of the huge balance-sheet expansion in the US. US monetary base, a measure of notes and coins in circulation plus reserves held at the central bank, has more than quadrupled from around $800m to more than $4 trillion since 2008. The stock market has been a direct beneficiary of this money and will struggle now that QE3 has ended. 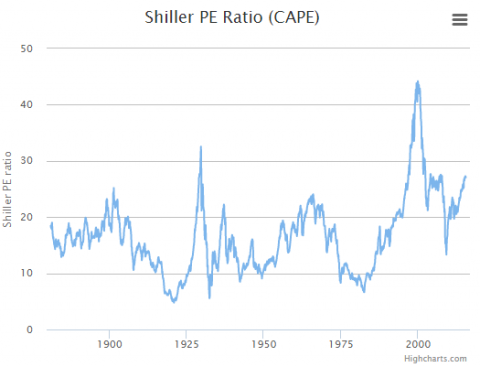