When Janet Yellen and the rest of the Eccles cabal decided to stay on hold in September, the “new” reaction function was all anyone wanted to talk about.

Of course, the idea that the Fed was to that point “data dependent” (versus market dependent) was something of a joke in the first place, but the specificity the FOMC employed when referring to global financial markets still took some observers off guard. The worry for the Fed revolved primarily around the possibility that a hike could accelerate EM capital outflows at a time when a series of idiosyncratic factors (like a civil war in Turkey, a political crisis in Brazil, and the 1MDB scandal in Malaysia) had already pushed the emerging world to the brink of crisis. Enormous outflows from China as a result of the yuan deval didn’t help.

In short, the theory was that even a “symbolic” 25 bps hike had the potential to trigger an EM exodus that would make the taper tantrum look like a walk in the park as a soaring dollar exacerbated an already tenuous scenario playing out across the space.

Now, as we look back at Q2 and Q3, we learn that all told, well more than a half trillion in capital fled EM over six months.

Recent capital outflows from EM have raised fears of a potential credit crunch, which if it materializes, could exacerbate the economic downshifting of EM economies. On our estimates $360bn of capital left China during the previous two quarters and an additional $210bn left from the rest of EM. 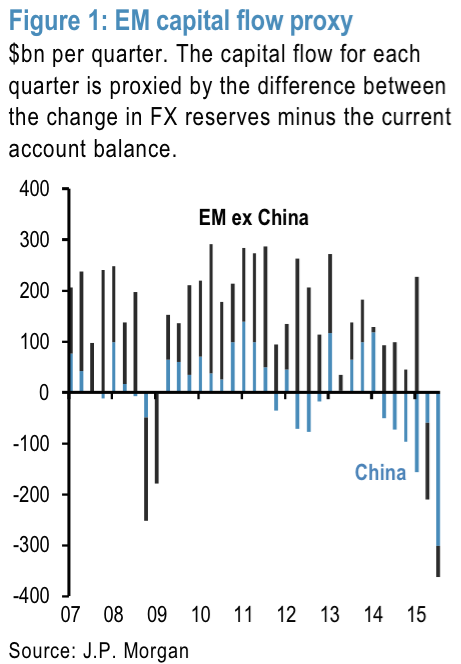 This of course led directly to a massive FX reserve drawdown and indeed, over the past 18 or so months, the so-called “Great Accumulation” of USD assets has come to a rather unceremonious end. Here are two graphics from Goldman which demonstrate the scope of the build and subsequent unwind: 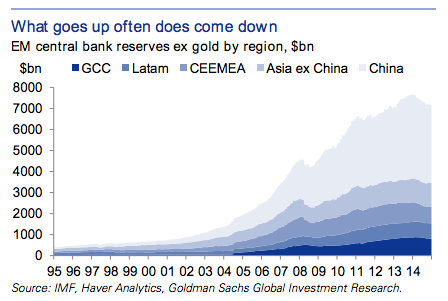 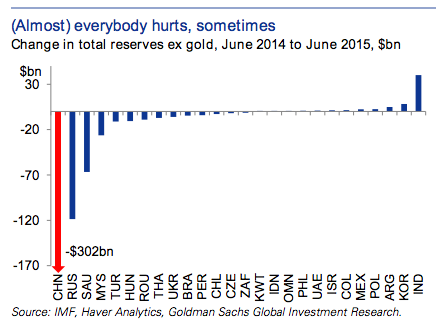 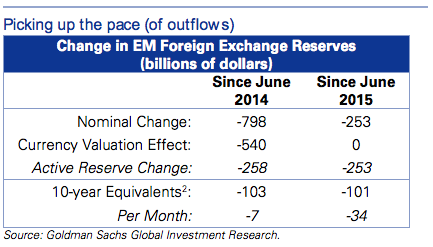 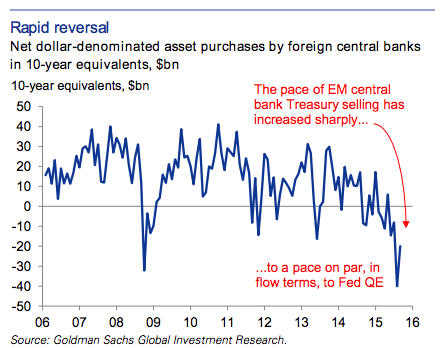 But for anyone who’s concerned about the effect this might have on tightening global monetary conditions or otherwise amplfying a “liftoff”, don’t worry because while QT may indeed be QE in reverse, Goldman thinks it can’t possibly be as “negative” as QE was “positive”given the fact that it’s inherently limited by how much EMs have to sell whereas QE is only limited by central planners’ collective imagination:

Countering widespread worries about QT, Zach Pandl of our US Economics Research team argues that the impact of EM reserve selling does not amount to QE in reverse. Even if the pace of dollar-denominated asset sales lines up roughly with the Fed’s Treasury purchases over the main phase of QE, the former won’t pack the same punch.
Specifically, QT lacks the signaling value of QE, actually works to weaken the dollar (as does QE), and is finite because reserves can only decline to zero (in contrast to theoretically unlimited asset purchases—a key source of QE’s potency). 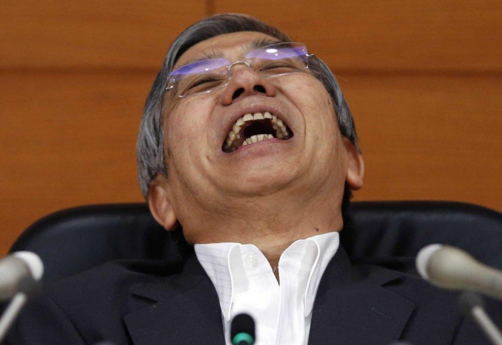