End Game For Central Bankers—–‘Price Discovery’ Will Get Violent

Via email, Saxo bank CIO and chief economist Steen Jakobsen declares “Endgame for Central Bankers“. He also asks “Why is it that Most People Trust or Bother to Listen to Central Banks?”

The SNB suddenly abandoning the CHF ceiling had wide consequences last week as we were all taken by surprise. The fact that it would and should happen eventually was not lost on the market, but the SNB was, as late as last weekend, talking tough and telling the market that the floor was an integral part of Swiss monetary policy. Then suddenly it was not.

I fully understand the rationale for the move (Jakobsen: SNB move is rationality itself) but, like most of the market, I remain extremely disappointed in the SNB’s communication and handling of the issue. But isn’t the bigger lesson or bigger question: Why is it that most people trust or bother to listen to central banks?

Major centrals banks claim to be independent, but they are all ultimately under the control of politicians. Many developed countries have tried to anchor an independent central bank to offset pressure from politicians and that’s well and good in principle until an economy or the effects of a monetary policy decision beginning spinning out of control. At zero bound for growth and for interest rates, politicians and central banks switch to survival mode, where rules are bent or even broken to fit an agenda of buying more time.

Just look at the Eurozone crisis over the past eight years: every single criteria of the EU treaty has been violated, in spirit of not strictly according to the letter of the law, all for the overarching aim of “keeping the show on the road”. No, the conclusion has to be that are no independent central banks anywhere! There are some who pretend to be, but none operates in a political vacuum.

That’s the reality of the moment. I would not be surprised to find that the Swiss Government overruled the SNB last week and the interesting question for this week of course will be if the German government will overrule the Bundesbank on QE to save face for the Euro Zone? Likely….

The most intense focus for the last few years in central banking policy-making has been on “communication policy”, which boiled down to its essentials is merely an appeal to “believe us and act accordingly”, often without any real policy action.

Studies show that the business cycle was less volatile before the Federal Reserve was born. The presence of the Fed means that the implicit backing of the Fed allows excess leverage (gearing), and this has resulted in bigger and bigger collapses in financial markets as each collapse triggers yet another central bank “put” that then enables the next bubble to inflate. And the trend of major crashes has been increasing in frequency: 1987 stock crash, 1992 ERM crisis, 1994 Mexico “Tequila crisis”, 1998 Asian crisis and Russian default, 2000 NASDAQ bubble, 2008 stock market crash, and now 2015 SNB, ECB QE, Russia and China, which will lead to what? I don’t know, but clearly the world of finance and the flow of money is increasing in velocity, meaning considerable more volatility. By the way, the only guarantee I issued at the end of 2014 looking into 2015 was: 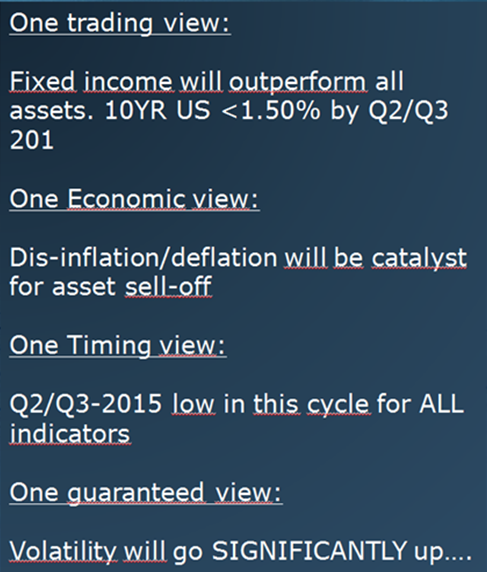 [Mish note: Look close. That’s 4 statements but it’s One view on fixed income, one on the economy, one on timing, and one guarantee.”

Where does this all bring me? The SNB was really the culmination of bigger and bigger moves at the end of a low volatility paradigm. I have been trading currencies for more than 30 years, Thursday’s move was single biggest move I have experienced in one market but let’s look at other remarkable moves this year:

The takeaway here is that these extreme moves may be a symptom of central banks having attempted to suppress the business cycle and engineer low volatility in an attempt to restore confidence. But when you try to suspend economic reality, the risk we may be realizing all over again here is that the price discovery becomes that much more violent once markets build up so much pressure that central banks can’t contain them.

We started the year with the Maximum Dislocation of the market in a model of planned economies. We have bond and credit spreads at historic low, currencies at extremes, equity and real estate in bubble-like valuations, and geopolitical risk that keeps rising, as seen this year in Paris, last year in Ukraine and with the rise of ISIS.

The US Dollar is putting pressure not only on the US itself but also the world. A journalist asked me last week: Who benefits from a stronger US Dollar? I still owe him an answer as I can’t really figure out who does. In fact, the world has two growth engines at the moment: The US and emerging markets. Both are pretty much US Dollar-based economies. Debt (US Dollar funding) in EM has exploded to an extent that many including the World Bank are now warning of the risk of a “Perfect Storm in EM”. Both the US and EM became credit junkies during the QE-to-infinity days in the US from 2009 through much of 2014. And we’re now seeing the inevitable law of unintended consequences as the Fed has pulled the world off its USD-based credit addiction.

Another unintended consequence was that energy was the trigger for the crisis in 2008 as the rising energy prices took 5 trillion US Dollar out of the economy – which became the catalyst for the Eurozone crisis and US bank bail-out. Now eight years later, the drop in energy has broad spillover effects as the wealth is transferred from Sovereign Wealth funds in resource countries to consumers. That’s good for Main Street and bad for Wall Street as the “bid” in the assets disappear as these former sovereign buyers will now become sellers of assets to fund fiscal shortfalls domestically. And that goes for the SNB, as well, as the SNB will now stop adding the NASDAQ stocks it was famously buying previously as its reserves have now stopped growing for the duration.

Meanwhile, the fact that volatility is rising, the fact that we see early signs of the business cycle being activated, is good for the real economy. It’s a sign of money flowing from the 20% QE induced overvalued listed companies to the 80% SME (the real economy) as increases in volatility will lower the expected returns on “paper money” and make it more attractive to invest in tangible assets and real businesses.

The world should be concerned when volatility is too low, as it’s a sign the market is allocating money poorly. The one lesson everyone needs to learn is that for a market based economy to function, you need to allocate capital to activities that provide the highest marginal real return on capital. Not to the most political connected.

When history is written on 2015, I have no doubt that the Paris terror act and SNB removal of the floor will stand out – both happened less than two weeks into 2015, although that is random, what is not random is that the market volatility has been rising directly and non-directly through a misallocation of capital directed by the central bank system.

Many central will envy SNB for its move last week, as they at least try to regain some control of their destiny, but the conclusion remains: as a group, central banks have lost credibility and when the ECB starts QE this week, the beginning of the end for central banks will be well under way. They are running out of time – that’s the real real bottom line: SNB ran out of time, ECB runs out of time this week, and Fed/BOJ and BOE ran out of time in 2014.

What comes now is a new reality – the SNB move was a true paradigm shift – we can no longer look at central banks, the markets and policies of extend-and-pretend in the same light as we did last Wednesday (the day before the SNB move).

The above is quite similar what I said in a series of recent posts: