When we last looked at the soaring default rate among junk bonds issuers just two weeks ago, we noted that the $14 billion in defaults had already pushed the April total to the highest since 2014, while the first quarter was the fifth highest quarterly default total on record. 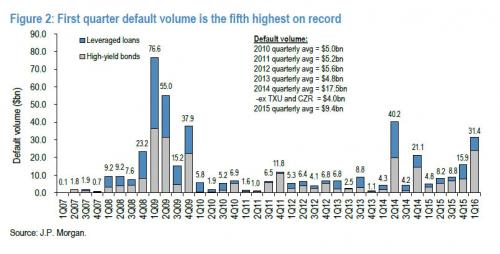 But it was the stark deterioration within the energy space that we said would promptly push high yield bond defaults within the troubled sector to hit all time highs in very short notice.

That prediction was validated less than a month later because following this weekend’s bankruptcies of Ultra Petroleum and Midstate Petroleum which added $3.1 billion to the mushrooming high-yield energy bond default volume tally, in addition to the $1.5 billion of credit facility defaults, the energy high-yield default has soared to a record 13% rate, surpassing the 9.7% mark set in 1999, according to Fitch Ratings.

To be sure, neither of these defaults were a surprise: prior to this weekend, Fitch had a 2016 energy sector default forecast of 20% and included both of these filings in the annual forecast. Furthermore, based on the current bond trading prices of approximately $0.15 for Ultra’s $850 million 6.125% bonds due 2024 and $450 million 5.75% bonds due 2018, the market also expects well below-average bond recoveries, something else we have previously highlighted will be a distinct feature of this default cycle.

As Fitch goes on to note, Ultra Petroleum cited persistently low natural gas pricing that left it with an unsustainable capital structure as reason for filing. The company plans to use the bankruptcy process to renegotiate unprofitable contracts as well as reduce its $3.7 billion of total bank and bond debt obligations. The $999 million reserve-based credit facility (RBL) at subsidiary borrower Ultra Resources was essentially fully drawn at the time of filing, following a $216 million draw in February 2016.

Ultra’s bankruptcy was expected as it followed the expiration of grace periods for interest payments on notes, nonpayment of certain pipeline transportation fees, bank covenant violations and de-listing of the common shares.

Midstates Petroleum’s filing affects approximately $1.8 billion of total debt and is based on a pre-arranged plan support agreement with its lenders under the reserve-based revolving credit facility that represents approximately 80% of first lien facility borrowings, along with certain other creditors holding approximately 74% of second lien debt and 77% in principal amount of the third lien debt. The proposed plan incorporates some secured debt paydowns and equity conversion of debt that is junior to the first lien debt. Low commodity prices triggered a liquidity crunch at the company.

In more bad news for bank lenders, Midstates, like Ultra borrowed up to the remaining maximum RBL borrowing base in the months leading up to bankruptcy. Midstates drew $249 million under its $750 million RBL in February 2016 to build cash in advance of the bankruptcy filing and the April 2016 re-determination. Full draws of RBLs ahead of restructuring and re-determinations have occurred among some of the most distressed E&P companies as they plan to enter restructuring with this cash liquidity. Linn Energy and W&T Offshore are two other E&P companies that recently fully utilized RBLs.

But this biggest problem for banks is that as more energy companies default should oil prices fail to materially recover, leading to tumbling recoveries across the capital structure and far greater impairments than modeled, the question will once again become one of just who has the greatest committed exposure to the energy sector, especially if as we hinted earlier today, the oil price pattern from last summer reasserts itself and WTI proceeds to slide once more as shale producers resume pumping now that they have been properly hedged following the recent rebound in oil.