EU Banking Mayhem: One Bank at a Time—-Then All at Once

Investors are not amused.

The European banking crisis simply doesn’t let up. Currently, the big two German banks are grabbing the headlines away from the Italian banks, due to their size and the damage they could do to the global financial system. Other banks are in bigger trouble still, and some have already collapsed, with bailouts and bail-ins getting lined up.

Deutsche Bank had to endure a horrendous Monday after it was leaked on Friday that Merkel had refused to entertain bailing out the bank before the general elections a year from now. Merkel’s popularity has gotten broadsided recently, and bailing out bank bondholders with taxpayer money is just not popular at the moment.

Then Commerzbank, in which the government already owns a stake of 16% as a result of the bailout during the Financial Crisis, graced the headlines with leaks that it would lay off 9,000 employees, nearly one-fifth of its workforce. This will cost about €1 billion, according to the sources. To pay for it, the bank will scrap its dividend for 2016 to reduce the bleeding and preserve capital, in what is turning out to be the hellish environment of negative interest rates.

We’ve been writing about the European banking crisis for a long time, it seems, as it drags on, and meanders from one country to another, and sometimes we write about it in an amused fashion because we’ve got to keep our sense of humor in all this gloom.

But investors who believed in all the hype and in Draghi’s promises and in Merkel’s strength and in the willingness of all of them to do whatever it takes to protect bank bondholders and stockholders, and who believed in the miracle of Spain’s recovery, and in Italy’s new government and what not – well, they’re not amused.

For them, it has been bloody. The global financial crisis got swept under the rug. Then the euro debt crisis took down some banks at the periphery, and taxpayers stepped in to bail out the bondholders, mostly, and a lot more things got swept under the rug. But the problems weren’t solved. And as the decomposing assets under the rug kept exuding their pungent odor, investors held their nose and played along for a while.

But now it’s just getting worse. And investors are wondering what exactly is under these rugs – or maybe they’d rather not know for it’s too ugly to behold. And every time someone does look, for example at the Italian banks, they find even bigger problems that have started to metastasize.

This banking crisis has the potential to transmogrify into a financial crisis. All it takes is for one of the big ones to suddenly topple. The flow of credit would freeze up instantly. In an economic system that depends on credit, and whose lifeblood is credit, such an event is a financial crisis. 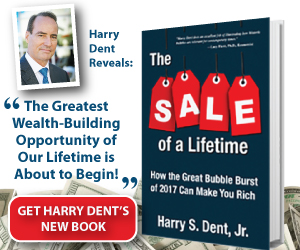 The problem isn’t restricted to a couple of Italian or German banks. It’s deep and wide.

Here are the 29 banks in the ESTX Banks Index of Eurozone banks (so Swiss and UK banks, for example are not included). It shows the percentage drop from their 52-week high. But for some of these banks, particularly for Italian and Portuguese banks, that 52-week high was just about last year’s 52-week low, so relentless has their decline been over the years. Some of them had already been reduced to penny stocks years ago, and for them, in euro terms, the biggest losses occurred back then. So these mayhem banks, color coded by country: 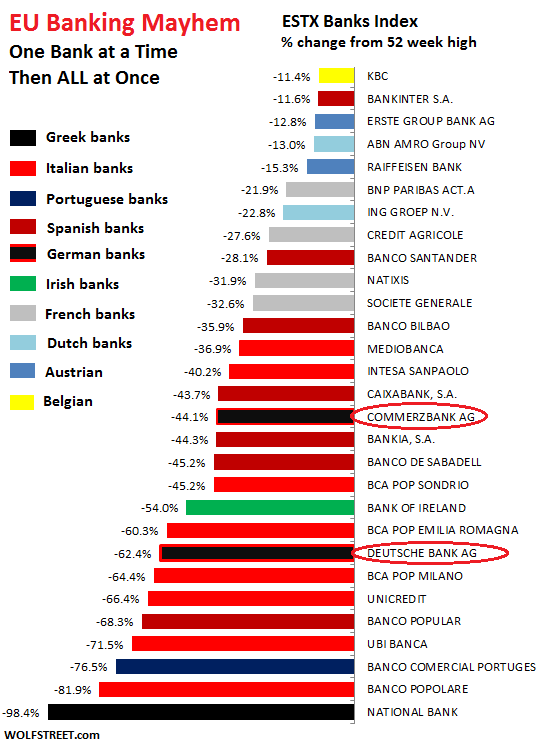 If a bank stock plunges from €0.04 to €0.01 over the 52-week period, such as Banco Comercial Português in Portugal, it has been toast for longer than 52 weeks, and the percentage plunge is essentially meaningless because shares were worthless to begin with.

They’re troubled at the same time. The can has been kicked down the road for years. Now negative interest rates appear to have inadvertently crushed the can.