Syriza party leader Alexis Tsipras who resigned in the wake of his cave-in to the troika is back in office following Sunday’s snap elections.

The election was supposed to be extremely close, but it wasn’t.

Greek polls are notoriously unreliable. Tsipras won his first election by a huge vote even though polls were close. On Sunday the result was the same.

Pollsters had New Democracy running neck-and-neck but in a low turnout Syriza received 35.5 per cent of the vote to 28 percent for New Democracy.

Greek election rules give a huge block of parliament to the plurality vote, so in parliament the score is 145-75 out of a total of 300.

145 is short of a majority, but close enough so Tsipras can form a coalition with the Independent Greeks party (Anel), just as Syriza did after the last election. 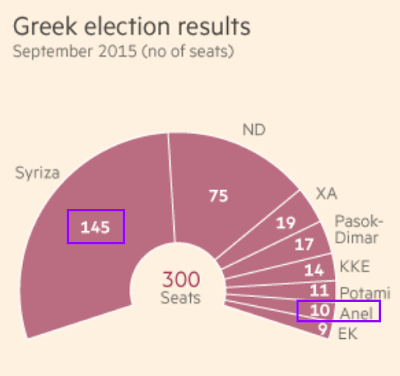 Whether the coalition proves stable is anyone’s guess.

The Financial Times provided the above chart (purple highlights mine) and this commentary.

Alexis Tsipras’s radical left Syriza party secured a clear victory in Sunday’s Greek general election, suggesting his gamble on snap elections after striking a deal on a new €86bn bailout had paid off.

Mr Tsipras’s win cements his place as the pre-eminent figure in Europe’s far-left anti-austerity movement and is likely to galvanise sympathisers including Spain’s Podemos and Jeremy Corbyn, the hard-left leader of Britain’s Labour party.

Mr Tsipras insisted Syriza would govern for a full four-year term, even though his revived coalition with the small nationalist Independent Greeks party (Anel), announced on Sunday night, looks far from stable with only a six-seat majority in parliament.

But he warned there would be no easy exit from the country’s six-year recession. His first task as re-elected prime minister will be to implement more tough austerity measures demanded by creditors in return for a new €86bn rescue package.

Early results put turnout at only 55 per cent, suggesting many young leftwing voters angered by Mr Tsipras’s decision to capitulate to Greece’s creditors and accept more harsh austerity measures in return for a new bailout had declined to take part, as experts had predicted.

The above comments by the Financial Times in regards to Tsipras being the “pre-eminent figure in Europe’s far-left anti-austerity movement” should have every one laughing or gagging. Take your pick.

Tsipras first ran on a radical left platform, but this time his platform was virtually indistinguishable from that of “center right” New Democracy.

The number one rule for politicians is “Say or even do anything necessary to stay in office“.

With that comment, I congratulate Tsipras for pulling it off, while noting that his problems have really just begun. Good luck with that five-seat majority Alexis, you will need it.