The stock markets of the so-called PIIGS are breaking down on an absolute and relative basis – not a positive development for global markets.

The PIIGS are starting to squeal again in Europe. No, not the kind that produces pancetta or linquica or bangers. We are talking about the continent’s debt-laden, economically-challenged countries known by the acronym PIIGS, namely, Portugal, Ireland, Italy, Greece and Spain. These nations are essentially economic dead weight for Europe considering their plight. That said, all financial markets are cyclical – nothing straight-lines. And indeed, despite the apparent inevitable downfall that awaits the Eurozone as a result of the PIIGS, the associated equity markets have actually been quite buoyant for the better part of the last 4 years. Not so anymore.

We have posted before a composite that we constructed consisting of equally-weighted portions of each of the PIIGS’ stock markets. We call it…the PIIGS Composite. The composite starts in 2006 and hit an all-time low in June 2012, amid the Europe/PIIGS near-meltdown. Following Mr. Draghi’s “whatever it takes” moment, the PIIGS Composite shot up off the mat, rallying nearly 75% in 3 years before peaking in May of last year. Since then, the composite has gradually leaked lower. Around the start of the year, the leak turned into a gusher. As of this week, the PIIGS Composite is at near 3-year lows, approaching levels last seen in 2012. 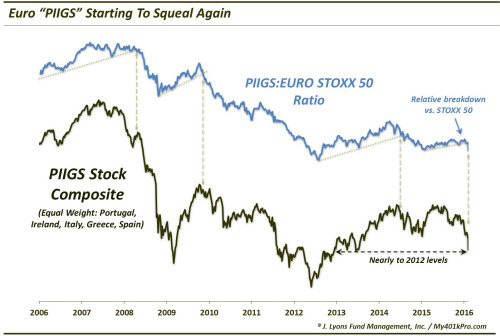 The Composite weakness is not just significant on an absolute basis. As the chart shows, it is also breaking down on a relative basis versus the DJ Euro STOXX 50, a proxy for the more established, “blue chip” stocks in Europe. Like all higher-beta sectors, stock market bulls want to see the PIIGS outperforming the lower-beta blue chips. That can be an indication of a willingness of investors to take on risk, a healthy condition for a bull market. In other words, when the PIIGS are outperforming, it is symptomatic of a “risk-on” environment. Conversely, when they are lagging, it is a sign of “risk-off”.

As the chart indicates, risk-off is decidedly the case at present as the PIIGS:STOXX 50 Ratio just broke sharply lower, through a shallow year-long uptrend. Looking at prior trend breaks in the ratio, e.g., mid-2008, late-2009, and mid-2014, we see that substantial bouts of weakness ensued throughout European markets, particularly in the PIIGS. These also led to scares among some or all of the PIIGS pertaining to their economic viability.

On an individual basis, the PIIGS markets are each sucking wind to varying degrees, from hyperventilation to suffocation.

By far, the winner has been Irish stocks. The Irish ISEQ Index was at a 52-week high as recently as early December. It then ran into, and bounced precisely off, the 61.8% Fibonacci Retracement of the 2007-2009 decline. It has fallen since, recently accelerating to the downside to near 52-week lows. Should the global equity selloff get worse, this market is in danger of playing “catch-down” as investors sell what they can instead of what they want. 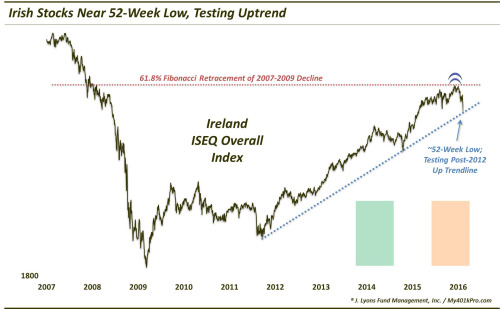 Since breaking its post-2012 Up trendline, Italy’s FTSE MIB Index has dropped to almost a 3-year low now, recently breaking the key 61.8% Fibonacci Retracement of the 2012-2015 rally. 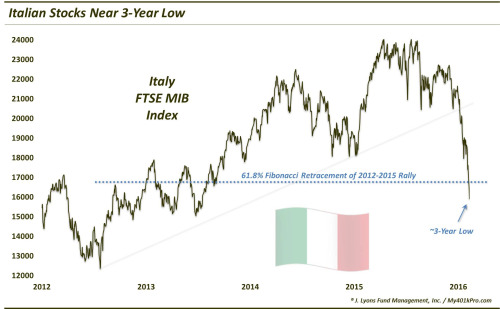 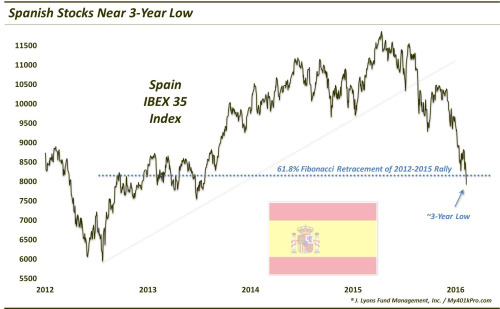 In the suffocation category, Portugal’s PSI 20 Index is within spitting distance of a 20-year low. 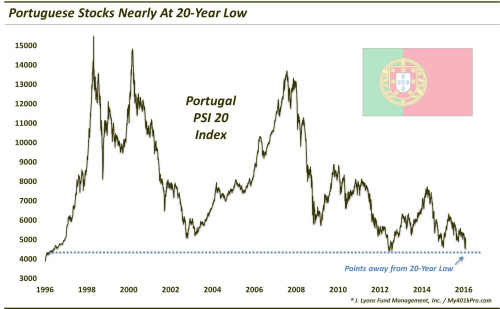 And the biggest loser among the PIIGS? It’s Greece, whose Athex General Index is at a 25-year low. 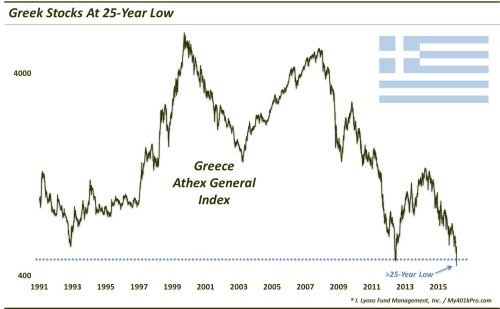 This is not a pretty situation shaping up for the Eurozone once again. Whatever benefit that accrued as a result of “whatever it takes”may have largely run its course. Again, it will not be a straight line lower. However, the absolute and relative breakdowns in the PIIGS Composite suggests that the post-2012 run-up is over. Thus, while the PIIGS rally of the past several years may have tasted like Jamon Iberico and Prosciutto di Parma to investors, they may have to settle for scrapple and spam from any rallies in the near future.