The broad numbers on the European banking system didn’t get worse in November. But that doesn’t mean they got better. And in the weak sister states along Western Europe’s rim the numbers got notably worse. Only Germany had a significant bounce. It was not enough to change the flat to weakening trend of deposits there. The numbers for France held their own.

I saw a couple of Wall Street Journal tweets over the weekend touting accelerating loan growth in Europe. Today, on Jan 1, I can no longer find the articles they referred to. Apparently the editors have walked them back for some reason.

Here are the actual numbers. Total loans grew by 0.2% in November. Woopdedoo. That compares with 0.3% in November 2015. The year to year growth rate was a rip roaring 0.7%. That’s down from 0.8% in October.  Total bank credit is still down 4.2% from the 2011 peak. It has gained only 2% since the ECB instituted negative interest rates (NIRP) in late 2014.  The policy has utterly failed to stimulate credit expansion. 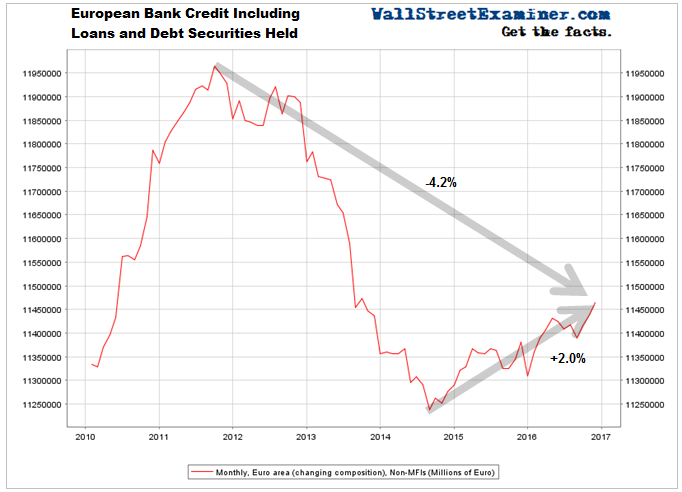 Compare that growth with a persistent 8% growth rate in US bank loans, and it’s clear that Europe’s situation is pathetic. It’s one misstep away from outright contraction. That would mean deleveraging. It would entail liquidation of loans. Cash available to the markets would shrink. In my opinion, it would mean the end of the US stock bubble, as European institutions seek to raise cash wherever they can.

The most liquid markets, and the easiest place for them to do that, are in the US. And European institutions hold plenty of US securities to dump, especially US Treasuries. It’s probably only a matter of weeks or months before US bond yields break out of their recent holding pattern and head for new highs.

The gains have been entirely in household borrowing. I’ll get to business borrowing below. Household debt to banks rose 0.5% in November. It was up by 2% over the past year and up by a total of just 4.8% since bottoming in May of 2014.  The 2% growth rate has held steady since October of 2015. It smells like accrued interest rather than any outright new borrowing.  In any event, it’s weak, indicating that few Europeans want to borrow at any interest rate. 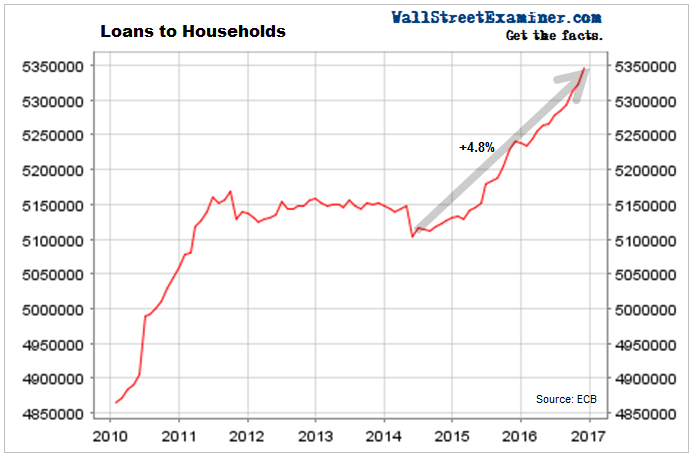 The data on revolving credit supports that. Revolving credit to households has been declining steadily since 2011. Many Europeans are opting to pay off debt in an environment of stagnant growth, political upheaval, and the massive failure of economic central planning. Time and time again the financial machinations of the ECB have failed to stimulate growth. Europeans as a group seem to have a much greater sense of recognition of just how massive and intractable Europe’s problems are. Kicking the can down the road is not a policy of solutions. 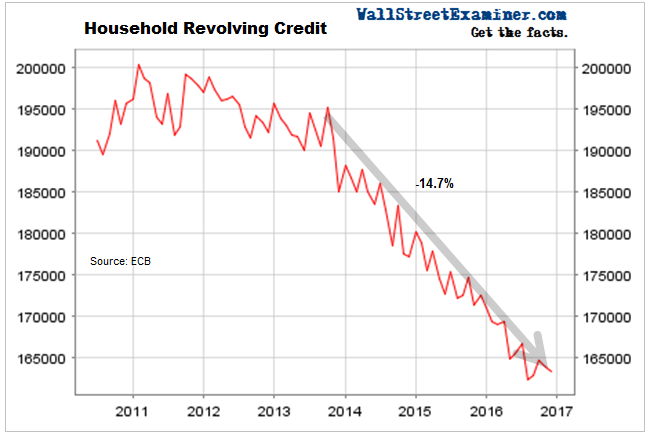 The ECB tracks business loans in a category called Loans to Nonfinancial Corporations.  This would encompass what’s covered by the Commercial and Industrial Loans category in the US banking data. That has been growing by leaps and bounds for the past several years. Businesses borrowed heavily to buy back their own stocks in the US. That has been slowing, but again, Europe is pathetic in comparison. 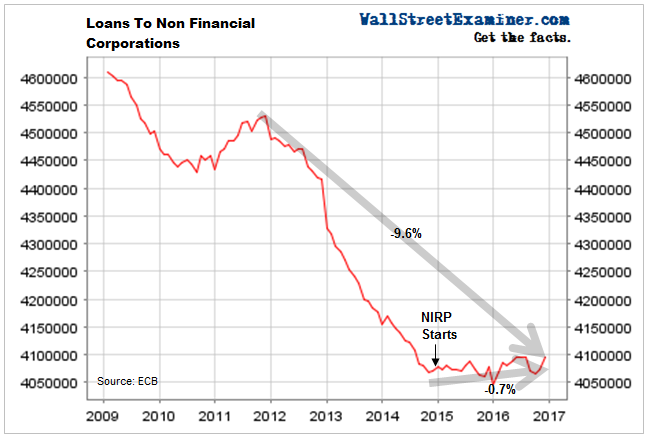 Business loans grew by 0.5% in November. That sounds good until you look at the bigger picture. Business loans have grown by a total of 0.7% since NIRP started in late 2014.  Mario Draghi and his clown posse at the ECB have been frantically seeking to stimulate the European economy. He started NIRP in 2014, and doubled down on the rates last year. A lot of good that has done! Business loans have essentially been flat.

While some companies have borrowed, others have been paying down debt. The result is no growth. Clearly European CEOs have had no interest in borrowing to goose their own stock prices, or for any other purpose. Business loans have fallen by 9.6% since a peak in late 2011.  US business loans grew at 7-13% PER YEAR over that period as CEOs rushed to buy back their own stocks before the Fed’s ZIRP party ended.

At least borrowing in Europe hasn’t been collapsing for the past 2 years. But considering the degree of frantic central bank stimulus, the failure of business borrowing to launch is ominous. In fact, not only have businesses been reluctant to borrow, those with credit lines have been paying them down since 2011. 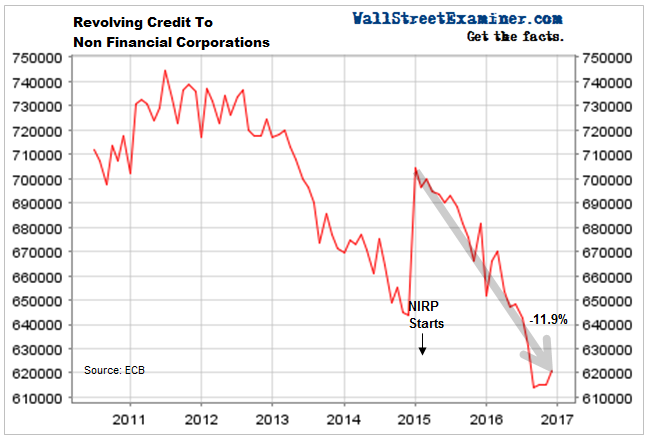 Revolving credit had a little bounce in November, rising 0.9%. But the bounce was definitely of the dead cat variety. The trend remains sharply down. Loans were down 8.9% year to year. The total loss since the data was adjusted at the beginning of 2015 is now 11.9%. It’s a sign of just how little confidence European businesses have in the economy there. Any flareup of the crisis now is like to result in even more liquidation of credit. That would be a bad thing, not just for European markets but for the US as well.

This report is excerpted from Lee Adler’s Wall Street Examiner Pro Trader monthly reports on the European banking system Report. These reports are part of the Macro Liquidity service. They include a more comprehensive review of European banking indicators, particularly on the deposit side.