European Banking System On The Brink

Europe’s banking system feels like it’s teetering on the edge of chaos. Or maybe it has already gone over and most people just don’t realize it yet.

Constant injections of massive amounts of central bank cash have only seemed to delay the worst case scenario. The ECB has tried every trick in the central banking book of voodoo and nothing has worked. I can’t say how long this can continue without the system falling apart. I would refer to the Buffettism that something that can’t continue, won’t.

I also have little doubt that when Europe goes, there will be a massive liquidation of US Treasuries. Yields will soar. US, stock prices may buck that selling for a little while. But eventually they too should succumb to the selling pressure.

On Monday we looked at the asset side of the ledger with a focus on loan growth, or lack thereof. In this report I’ll show you the deposit data, looking for clues on how the system is doing.

National Banking Systems in Europe – Some Still Grow, Others Contract

Deposits in Germany spiked in November. This is a pattern we have seen before from the German banks. It’s usually largely reversed within a few months. Also, the chart scale makes this look bigger than it is. The annual growth rate since last year is a rip roaring 1/10th of 1%.

After the completion of the LTRO paydowns in 2013, German bank deposits bottomed at 4.48 trillion euros. They’re now at 4.63 trillion, a gain of 3.2% in 3 years. Do the math. It’s about 1% per year. Compare that to the steady growth of US deposits at around 7% per year.

Meanwhile ECB has been pouring hundreds of billions of euros into the German banks. That money is like Elvis. It has left the building, for greener pastures. The ECB’s printed money has either been withdrawn from the German banks or it has been extinguished through debt paydowns. Prior to the November spike, Deutsche Bank and other troubled German banks were bleeding deposits this year faster than the ECB could print and inject money into the German banks.

While total deposits have had hardly any growth, German (and some other European) households continue pouring money into German bank accounts. The question is whether households will be bailed out or will be the bagholders, if and when the crunch can no longer be papered over. The answer is probably that European depositors will be asked to participate in a “bail-in.” In other words, some of their hard earned deposits will be written off, never to be recovered. 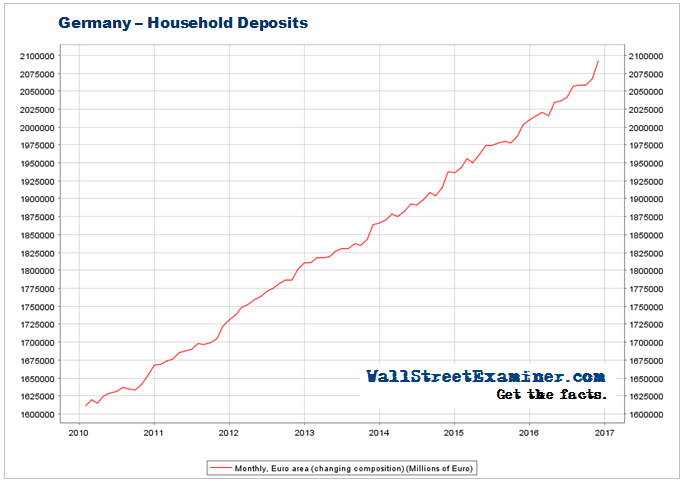 French banks had avoided the worst of the deposit liquidation for most of 2016. But then they had a downdraft from May to September. A dead cat bounce has followed over the past 2 months. 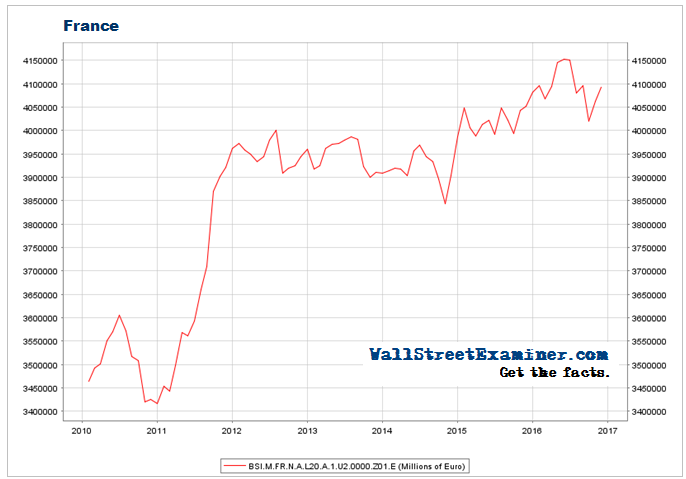 So the French banks saw deposits grow for awhile, possibly due to inflows from the rest of Europe. As the strongest (apparent) bank system in Europe, the French banks could be a bellwether for the next great systemic crash. When they start to crack, the jig is up.

Households have been growing deposits in Germany and in France. Non financial corporate deposits have been trending higher (Charts below). These increases were all an effect of negative rates. Deposit costs are lower than the cost of holding government paper. Businesses and wealthy families choose not to hold highly negative yielding government bonds. This will ultimately prove disastrous when the banks collapse and depositors are forced to bear the losses. Deutsche Bank’s recent troubles are just the tip of the iceberg, the first domino. 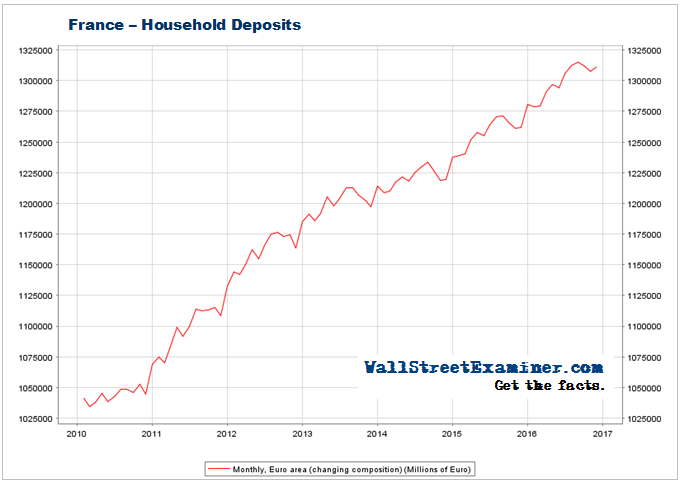 French people, and to some degree other European households, appear to have virtually unlimited faith in French banks. The stall in household deposits since mid year seems to be a seasonal pattern. While financial corporations and institutions flee the system, either the public has been successfully hoodwinked or it has no other options.

Non-financial businesses have also been pouring cash into French and German banks. In the course of everyday business activity, what choice do they have? But why have corporate business deposits in France grown so much faster than in Germany? With no widely publicized crisis in any of the major French banks, France has become the last man standing in Europe. So deposits flow out of Germany and into France. That causes French corporate deposits to grow faster than Germany’s. 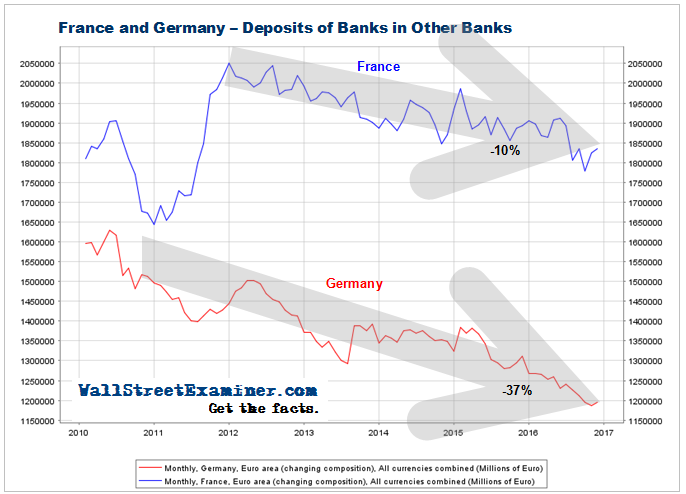 But look what is happening to the deposits of the banks themselves in other banks. Just as I predicted they would, banks have been extinguishing deposits ever since negative interest rates were instituted. And where has that trend been strongest? In Europe’s largest economy and banking system, Germany. They dropped to a new low in December even before the ECB went to an even more negative deposit rate. Then they dropped again in January. Banks will elect to use their cash deposits to pay off loans. Where will they get the cash? Why, from the ECB of course, as it buys securities from them.

Deposits of banks in other banks have had a slight uptick since October. But this isn’t close to reversing the downtrend.

In October, other banks continued to flee German banks while French banks saw a dead cat bounce within the downtrend. The downtrend in Germany has been unrelenting. France had been stable from late 2014 until June 2016. Then it broke down in July. The loss of confidence by European banks in one another is growing and spreading.

If any picture illustrates the problem in Europe, it’s these two. European banks have a clear lack of confidence in each other.  Confidence in the system has been falling for four years. The banks know all too well that the ECBs wild and crazy guy Mario Draghi, has achieved nothing to really stabilize the banking system. The ECB keeps pouring in the cash, and trying counterproductive stunts like NIRP, to maintain a patina of stability.  The question is how long it will be until these frantic life support measures no longer work.