European Banks Take A Turn for the Worse

The ECB continues to buy €65 billion per month in bonds from European banks. But the European banking system is shrinking, not growing.

The policy of QE bond purchases was meant to stimulate European credit and economic growth. Instead, it is having the opposite effect.  Total assets in European banks fell by 2% in December.   They are down by 11% since mid 2012. Most importantly they were actually slightly lower at the end of 2016 than they were in September 2014 when NIRP was first implemented. 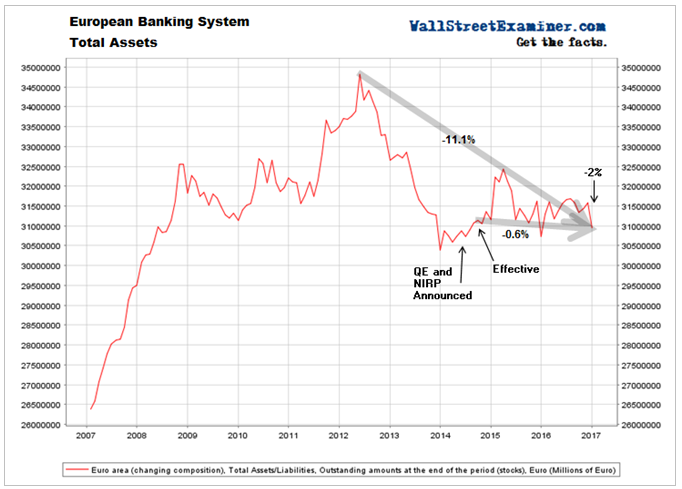 Total loans fell by €53 billion or 0.5% in December. The year to year growth rate was a rip roaring 0.9%. Total bank loans are still down 4.6% from the 2011 peak. It has gained only 1.3% since the ECB began imposing negative interest rates (NIRP) in September 2014 (announced in June). The policy has utterly failed to stimulate credit expansion. 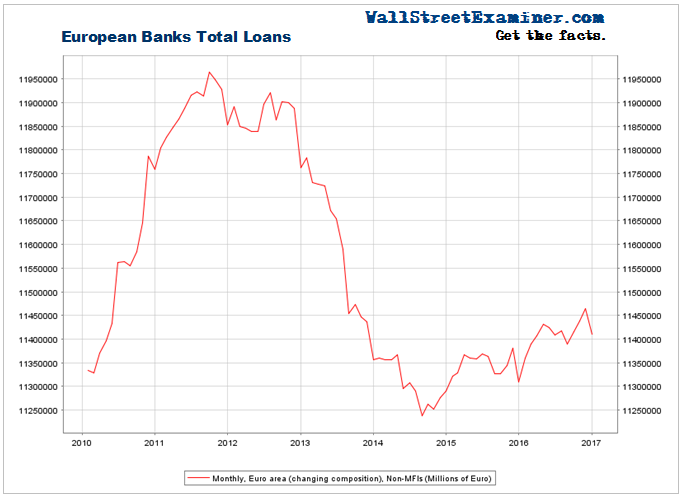 When the ECB announced the negative interest rate policy in mid 2014, I immediately wrote that the policy would have the opposite effect from the one intended. I felt that because of the penalty to the banks holding deposits at the ECB, they and large investors would find ways to extinguish those deposits, or otherwise remove them from the system. They could do so by paying down loans or sending cash to the US or other markets.

The problem grew worse as yields on sovereign debt went negative. It encouraged interest rate arbitrage where holders of negative yielding paper would sell and move the funds to the US where positive rates were still available.

This is exactly what appears to have happened over the past couple of years. In spite of the ECB pumping 2 trillion euros into the system since late 2014, the banking system has refused to grow. It not only won’t grow, but in many countries and categories of loans on the asset side, and deposits on the liability side, there has been devastating shrinkage. It has been a slow motion implosion.

Since deposits in Europe’s banks peaked in April, the ECB has printed €740 billion in its QE program. Total deposits in the banking system should be up by at least that amount. When the ECB buys securities, it debits the selling dealer’s account at the ECB. That cash then flows into the banks as the dealer trades with other parties. 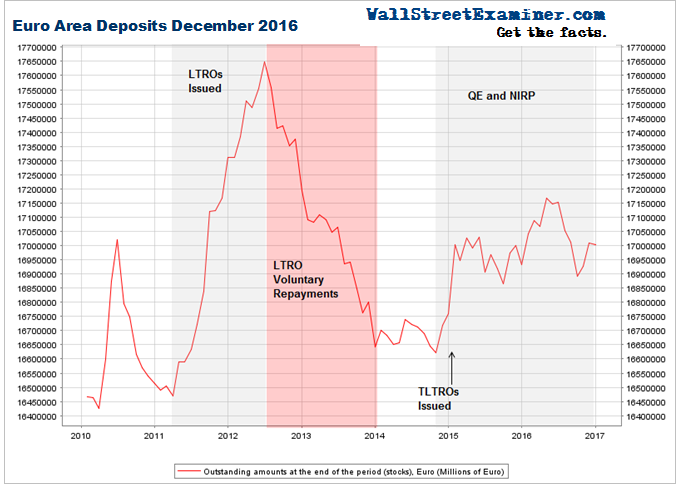 New ECB money (QE) is also transmitted into the banks when governments spend the funds which they raised in debt sales. The ECB had provided the cash for buying those government bonds when it made previous purchases of government bonds and other securities from dealers. Again, it did that with the new money it created by fiat and paid to the banks.

With those transmission mechanisms, bank deposits should increase euro for euro with the amount of ECB purchases. That has not happened. Instead, the amount of money in the banks has contracted. Deposits have declined by €166 billion since April 2016. Considering that the ECB added €740 billion to the banking system over that time, that means over € 900 billion has either been extinguished or has been transferred out of the European banking system, mostly to the US.

Business loans to nonfinancial corporations (similar to the Commercial and Industrial Loans stat for US banks) fell by 0.7% in December. OK, so these loans are almost always down in December. But let’s look at the big picture. Since NIRP was instituted the total of these loans has grown by 3 billion on a base of 4.29 TRILLION. That’s an increase of less than 0.1%. Not a lot of mileage for more than 2 years of negative interest rates and a couple of trillion in QE. 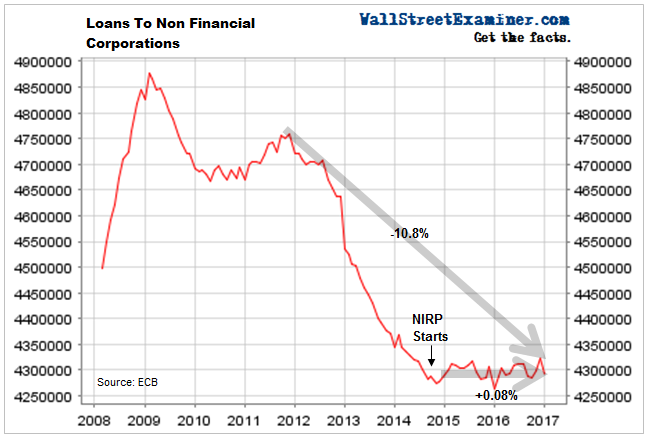 Mario Draghi and his clown posse at the ECB have been frantically seeking to stimulate the European economy. He has done more harm than good. While some companies have borrowed, others have been paying down debt. The result is no growth.

Unlike US CEOs, European CEOs have had no interest in borrowing to goose their own stock prices, or for any other purpose. Business loans have fallen by 10.8% since a peak in late 2011. US business loans grew at 7-13% PER YEAR over that period as CEOs rushed to buy back their own stocks before the Fed’s ZIRP party ended.

At least borrowing in Europe hasn’t been collapsing for the past 2 years. But considering the degree of frantic central bank stimulus, the failure of business borrowing to launch is ominous. In fact, not only have businesses been reluctant to borrow, those with credit lines have been paying them down since 2011. Credit lines have been in an outright crash as businesses frantically seek to deleverage. 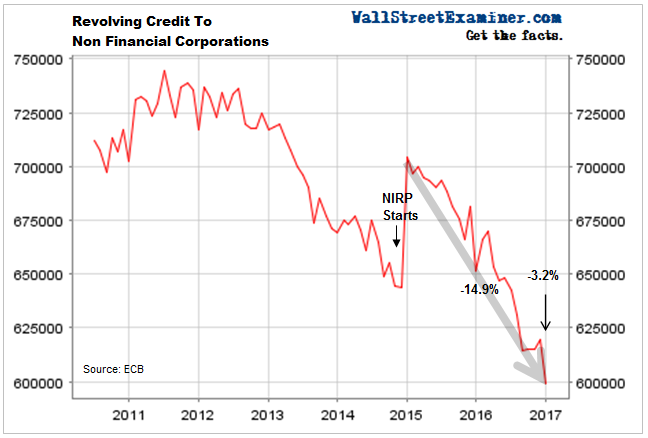 Therefore, about the only thing ECB policy has been successful in doing is boosting liquidity in the US, and hence keeping a bid under US stock prices.

So if the ECB hasn’t been successful in stimulating business borrowing, where has it been successful? Household borrowing. It’s up a whole 4.8% since coming out of a trough in mid 2014. Holy cow! That’s 1.9% per year.  Few Europeans want to borrow regardless of how low rates are. Europeans have no confidence in their economies. 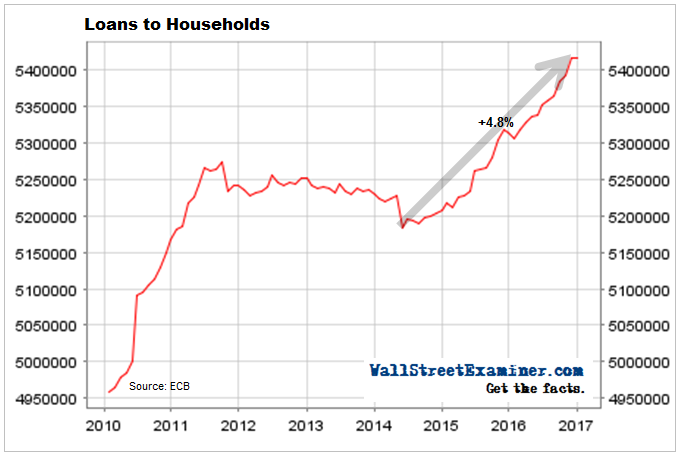 Perhaps the most frightening aspect of European banking is in interbank deposits and borrowing. They are crashing. European banks have a complete lack of faith in each other and in the ability of the ECB to make it all better. The bankers would know.

For more detail on that and on individual country data see my full report at the Wall Street Examiner to be published later on Friday February 3. If one of those dominoes falls, it will be difficult, if not impossible, to contain the contagion, throughout not just Europe, but the world.