One of the defining traits of the past few years’ “recovery” has been the torrent of money flowing from big banks to favored clients, and from there into trophy properties like high-end real estate, superyachts, and fine art. This might be the first financial bubble to completely bypass the 99%.

And now it’s ending. Falling oil prices and negative interest rates (rich people own a lot of government bonds) seem to have sucked the animal spirits out of the 1%, leading to stories like this:

A Worrisome Pileup of $100 Million Homes

(New York Times) – One of the latest symbols of the overinflated luxury housing market is a pink mansion perched above the Mediterranean on the French Riviera.The 13,000-square-foot property, built and owned by the fashion magnate Pierre Cardin, is composed of giant terra cotta orbs arranged in a sprawling hive. The home’s name befits its price. “Le Palais Bulles,” or “the Bubble Palace,” is being offered for sale at approximately $450 million.

The listing is part of a global pileup of homes listed for $100 million or more. A record 27 properties with nine-figure prices are officially for sale, according to Christie’s International Real Estate. That is up from 19 last year and about a dozen in 2014.

If you add in high-priced “whisper listings” that are offered privately, brokers say the actual number of nine-figure listings worldwide could easily top 40 or 50.

“It’s a bumper crop,” said Dan Conn, chief executive of Christie’s International Real Estate. “It’s just a new world in terms of what people are building and offering for sale.”

The rise in nine-figure real estate listings comes just as sales of luxury real estate have cooled. Many say the sudden surge in hyperprice homes — often built and sold by speculative investors — is the ultimate bubble signal.

“When you have a record number of homes for sale at a price point of $100 million or more, that tells you these homes aren’t selling,” said Jonathan Miller, president of Miller Samuel Inc., a real estate appraisal and research firm. “It’s not as deep a market as some might hope.”

Still more nine-figure homes are on the way. Real estate agents and developers say a home under construction in Bel Air is likely to have more than 50,000 square feet of living space, with finishes rivaling a superyacht’s. The price will be yacht-like, too, at around $300 million. Among the home’s amenities: the world’s largest safe.

Trophy Corporate Jets Were All the Rage, Until They Weren’t

(Bloomberg) – The private jet Janine Iannarelli is selling for a Russian client has leather seats, wood paneling, a satellite phone and can fly nonstop from Tokyo to Los Angeles. The price has dropped $3 million since September and is still falling.Iannarelli today is hawking the 10-year-old Bombardier Global 5000 for $14.5 million but recommends that her client cut the price further as the market for large-cabin business jets keeps weakening. A new Global 5000 lists for $50.4 million.
“There’s absolutely no evidence of a recovery on the horizon,” says Iannarelli, founder of Houston-based aircraft brokerage Par Avion Ltd. “None of the jet models has hit bottom.”

Rarely seen bargains abound for big corporate aircraft as tumbling oil wealth, a stronger dollar and a downturn for emerging-market giants from Brazil to Russia cripple demand. As owners from foreign tycoons to Archer-Daniel-Midlands Co. try to sell their planes, Bombardier Inc., General Dynamics Corp.’s Gulfstream unit and other planemakers are cutting output and chopping list prices to cope with a glut of new and used business jets.

Former Prize
The slump extends even to the Gulfstream G650 — just two years ago an aircraft so coveted by well-heeled buyers that some would pay $10 million above list for a used jet rather than wait four years for a new model. Now there are 19 G650s for sale, about 11 percent of the global fleet in operation. One 2013 plane that first was posted for sale in June at $68 million has had its asking price cut twice, to $58.8 million. 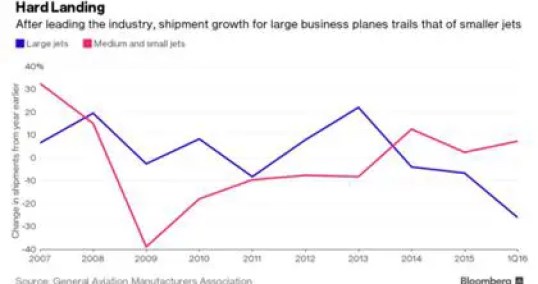 “It’s probably one of the best times I’ve seen in my career to get the values for a big-cabin jet,” says Brian Foley, a business-aircraft consultant who spent 20 years as director of marketing for the North American jet unit of France’s Dassault Aviation SA.

Last but not least, Miami condos — the bank vaults of the Latin American elite — are looking a lot like 2007:

(Bloomberg) – Miami’s crop of new condo towers, built with big deposits from Latin American buyers and lots of marketing glitz, are opening with many owners heading for the exits.A third of the units in some newly built high-rises are back on the market, though most are listed for more than their owners paid in the pre-construction phase. At the current sales pace, it would take 29 months to sell the 3,397 condominiums available in the downtown area, according to South Florida development tracker CraneSpotters.com.

With the U.S. dollar strong, South American investors who piled into the downtown Miami market after the real estate crash are now trying to unload their recently built condos, adding inventory to an area where 8,000 units are under construction and nine towers were completed since the end of 2013. Some are offering homes at a loss as demand cools. Condo purchases from January through April slid 25 percent from a year earlier, while the average price fell 6 percent on a per-square-foot basis, CraneSpotters data show.

“The problem is that investors are no longer buying, and now they’re going to be looking to sell,” said Jack McCabe, a housing consultant based in Deerfield Beach, Florida. “And what buyers are going to replace those other than vulture buyers looking for deals?” 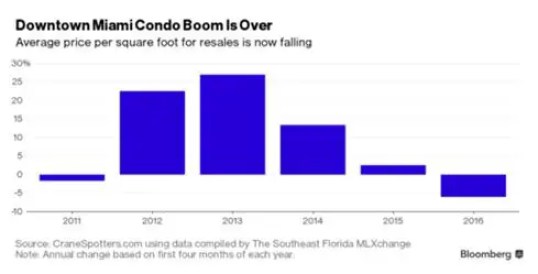 The strong rental market is giving many would-be sellers the opportunity to cover their costs. But there’s also a flood of new, professionally managed apartments under construction. And apartment vacancies in the downtown Miami area rose to 11.8 percent in the first quarter, double the rate two years earlier, according to property-data provider Reis Inc.

“The ticking time bomb is based on rental rates,” said Peter Zalewski, owner ofCraneSpotters. “When some of the foreign investors sitting on the sidelines have to dig into their pockets and subsidize renters, that’s the fuse that will lead to a correction.”

In a “modern” monetary regime, decision making — and the resulting spoils — are concentrated in a small group of insiders, so that’s where all the irrational exuberance lives. Which makes sense: How can you not be exuberant if you’re a corporate CEO making 500 times your workers’ pay, or if your family trust is invested in equities and bonds that are soaring because of QE.

But excess begets its opposite, and now the 1% is running scared as the realization dawns that no one is left to buy their trophies.