Fasten Your Seatbelts—-Stock Market Turbulence Ahead

By Michael Brush at MarketWatch

Talk about a nice ride: The S&P 500 Index of the biggest U.S. stocks is now up over 9% since I suggested buying equities Feb. 9 because the stars were aligned.

But all good things come to an end. Now it’s time for momentum investors and traders to take some money off the table. If you have a longer time horizon, hang in there because the likely weakness in stocks just around the corner won’t signal the end of the bull market.

The U.S. economy is too strong for that. A recession is just about the only thing that will kill this bull. Economic expansions just don’t die of old age, as recent Federal Reserve research confirmed.

However, there’s going to be some near-term volatility over the next few days or weeks, possibly touched off by nervousness about the upcoming Federal Open Market Committee meeting March 15-16.

Also see: Live the American dream with these homebuilder stocks

Of course, I could be wrong, but here are six reasons why you should expect near-term downside volatility.

1. This has been a narrow rally

For market reversals to sustain, they need broad participation by lots of stocks and sectors, also known as broader breadth. So far, that’s not the case, says Bruce Bittles, chief investment strategist at Robert W. Baird & Co., a brokerage. That could change. But until it does, this rally is suspect.

2. Stocks no longer look so cheap

The forward price-to-earnings multiple for the S&P 500 SPX, +1.32%  fell to the lower-14 range during the worst of the selloffs in January and February, and last August and September. Now it is back above 16. Historically when stocks are priced at this level, gains are harder to come by. 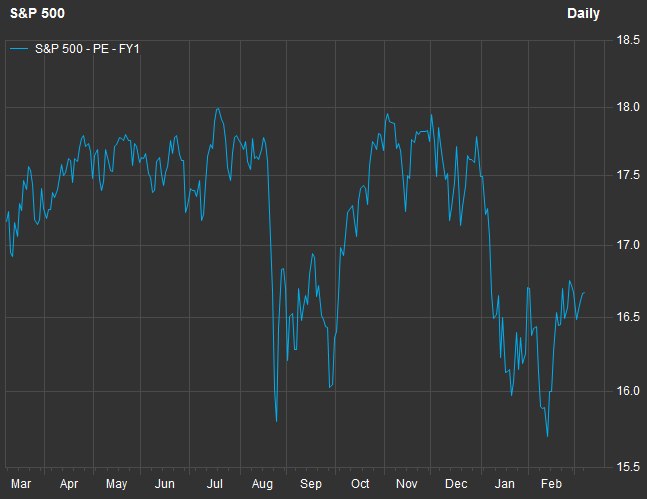 That’s likely to be the case now, given that earnings growth has weakened, and worries about U.S. and global growth could return. “Valuation multiples aren’t cheap,” says Ed Yardeni, of Yardeni Research. “We wouldn’t be surprised by a near-term retreat.”

For the moment, Fed rate-hike fears have eased. But good U.S. growth, and labor market tightness, could easily ramp up inflation fears at the Fed, bringing back investor angst about interest-rate increases.

Especially since we now know, as I’ve been saying all along in my stock newsletter,Brush Up on Stocks, that the U.S. is not going into recession in the near term. Recent economic data confirm a recession is not in the cards.

True, we seem to have just gotten a big break from inflation worries. That came in the form of weak wage growth numbers in Friday’s employment report. But that might be a one-off event.

And while stock investors partied, several markets showed concern about inflation even after those weak wage numbers, notes James Paulsen, an economist and strategist at Wells Capital Management.

He cites the strength in gold, for example, which is often seen as an inflation hedge. Sectors that benefit from inflation, like energy, materials and financials, outperformed. Bond yields also continued their upward move after the weak wage numbers. This told us that bond investors were not calmed by those weak wage numbers. (Investors sell bonds, driving up yields, when they think interest rates are going up.)

A lot of people have been lulled into complacency about inflation because the headline Consumer Price Index (CPI) has been anemic. This is a bit of an illusion because weak energy prices have held the CPI down. Now, with oil so much higher, the balm of low headline CPI inflation may go away. Core inflation, excluding food and energy, is already pretty robust. It’s above 2%.

To be clear, inflation-induced Fed rate hikes don’t have to kill the bull, as long as economic growth is OK. But, near term, a return of Fed rate hike worries could spook investors.

Lawrence McDonald, in an investment letter called The Bear Traps Report, likes to look to high-yield bond investors for signs of potential trouble.

Unlike stock investors, high-yield investors don’t think everything is OK again. This is one reason McDonald raised cash as stocks rallied last week.

“We went to the highest percentage of cash that we have had since 2011,” says McDonald, author of the New York Times bestseller “A Colossal Failure of Common Sense: The Inside Story of the Collapse of Lehman Brothers.”

His reasoning: The price of credit-default swaps on high-yield bonds, a kind of insurance against default, was recently nearly twice as high as the prices seen during calmer times when there was less risk in the markets. Likewise, investment-grade credit-default swaps are expensive.

5. Currency market points to risks ahead

When investors in Asia are worried about China, they seek refuge in the yen and yen-denominated investments, says McDonald, of the Bear Traps Report. That drives up the value of the yen against the dollar. So the yen can serve as a good fear gauge.

Recent yen strength signals investors are worried about China. The yen recently traded at about 1.13 against the dollar, compared with weaker levels of 1.18-1.24 for much of last year. “The dollar-yen exchange rate is telling us that China is not out of the woods yet,” says McDonald.

China-related risks include further yuan devaluation, a continued slowdown in economic growth, or problems at Chinese banks because of bad debt.

To be sure, investor sentiment is still pretty bleak, and this is bullish in the contrarian sense. But investor sentiment has risen a lot from the lows of mid-February. There are even a few pockets of complacency, says Bittles, the chief investment strategist at Robert W. Baird.

He cites the decline in demand for puts options. Put options can be a bet on market declines, so declining demand reflects rising sentiment. He also points out the CBOE Volatility Index VIX, -6.48% a kind of fear gauge, has fallen dramatically. It traded recently at about 17, compared with 25-32 when investor panic was in full bloom in mid-February and mid-January.

The recent stock market rally “has left an increasing number of stocks, sectors and the market itself in overbought territory,” he concludes.

Source: Opinion: Fasten Your Seat Belts, Because There’s Turbulence Ahead in the Stock Market – MarketWatch