Fed Is Not Just Behind The Curve, It’s Driving The Bus Over The Cliff

So the Fed didn’t raise rates again. And the timing of the rate increase will be data dependent. Ho hum.

There’s just one little problem. The inflation measures the Fed watches really don’t measure inflation. The Fed won’t see what its cronies in the government and economic establishment refuse to measure, which is that we’ve already long since passed the Fed’s 2% inflation target.

Every 3 months the US Census Bureau releases the results of its quarterly housing survey. We now know that rents rose by 6.2% year over year in the second quarter. But the fictitious number that the BLS uses to account for housing costs in the CPI, called Owner’s Equivalent Rent (OER), is only up by +2.9% year over year. The difference of 3.3% is known by the technical term: fudge factor. In this case, the BLS is undercounting the housing component of CPI by more than half.

Owner’s equivalent rent and actual renter’s rent account for 31% of the total weight of the CPI.  Multiplying the weighting of this component by the 3.3% fudge factor cuts a full 1% off the headline CPI and 1.3% off core CPI. If rent were counted accurately, headline CPI would be 2.2%, year over year, not 1.2%. Core CPI (excluding food and energy) would be +3.1%, not 1.8%.

Since Core has lately been stronger than the headline number, the Fed has naturally shifted its focus away from Core. But it doesn’t matter. The Fed is behind the curve. Way behind. 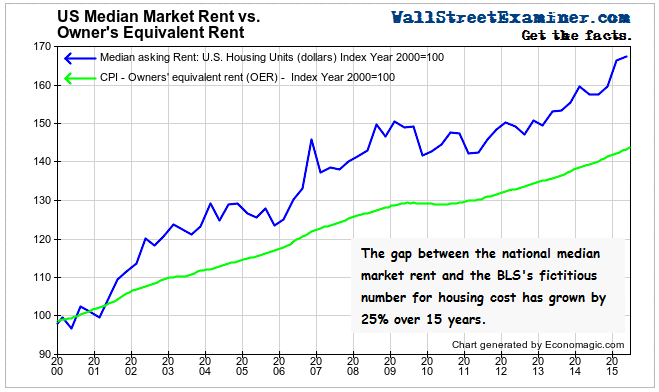 The BLS counted actual housing prices in CPI until 1982, but it got too expensive. The Federal Government uses CPI to index government salaries and benefits, and major employers often use it for the same purpose. So back in 1982 business and government came together and got the BLS to find a way to fudge the housing component of CPI so that it would understate inflationary reality. As a result, over the past 15 years, on the basis of this factor alone, CPI has understated actual consumer price inflation by about 0.5% on average each year. The BLS reported average inflation of 1.8% per year for the past 15 years, when it was actually 2.3% if rent had been correctly measured. That saved the government and businesses billions, while likewise increasing the burden of inflation on government beneficiaries and workers whose wages were indexed by CPI.

Likewise, the Fed would not need a phony 2% inflation target because inflation has always been above 2%. They have used the bogus CPI (and even worse PCE deflator which suppresses the rate even more) to create a bogus issue to justify keeping rates at zero. 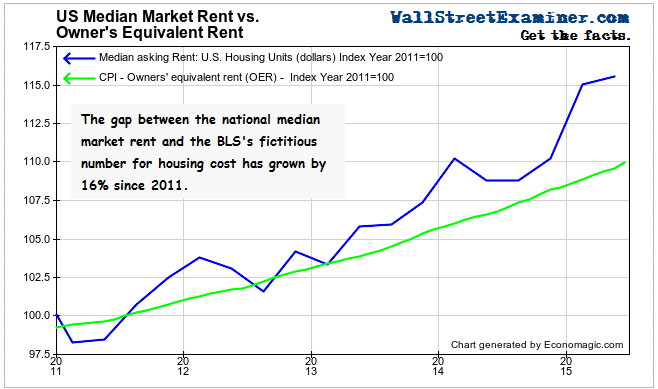 There are other measures of inflation which show that the Fed is way behind the curve. We can’t say for sure that the gap will continue to widen, or will even remain this wide. A deflationary debt collapse is not beyond the realm of possibility. In fact, one is happening in commodities right now, which is one reason the Fed is afraid to move off the dime.

Amazingly, the commodity price collapse has not translated into downward pressure on consumer or producer prices. Consumption goods inflation is a sticky, sticky thing. Businesses don’t like to cut prices. They almost never pass falling costs on to their customers.

What we can say is that the Fed is conning us, or themselves, probably both. Oscar Levant said there’s a fine line between genius and insanity. If you put 12 genius Fed brains in a room, that’s a lot of insanity.

Most Americans, particularly the elderly, are paying the price for that insanity as our wages fail to keep pace with the rising cost of living, the interest income on our savings remains nil, and we are forced to liquidate principal to pay the bills. Thus the US middle class standard of living perpetually erodes.

Obviously the Fed can foment stock market bubbles. It has been doing it for the past six years. But a healthy stock market eventually needs a growing economy where members of middle income strata are both engines and beneficiaries of that growth, instead of being forced into poverty and government dependency by stagnant or even falling real wages and loss of interest income.

Middle income people must be able to spend and invest too. If growth is confined only to the uppermost echelon at the expense of everybody else, that’s a trend that common sense says can’t be sustained forever. But this is what the irrational incentive of zero interest rates promotes and sustains. As long as the Fed uses phony inflation data to buttress its insistence on maintaining ZIRP, these negative trends will persist, and will ultimately end badly for everybody, including stockholders.