Fed Minutes Are Minutia Except For One Critically Important, Widely Ignored Detail

This post is an excerpt from the Pro Trader and Monthly Investor MacroLiquidity report. Subscriber links are below the text.

The Fed’s FOMC meeting minutes are a key instrument of official propaganda on how the Fed wants you to view policy. I won’t waste your time with what the Fed staff and FOMC members reportedly said about the economy and markets as represented in the July meeting minutes. Events have a way of superseding whatever they wanted you to think 6 weeks before the release.

I guess they need the 6 weeks to continue the debate over what they want you to think they were thinking so that they can tinker with the language. If the Fed wanted to, it could release a transcript the next day. But that would be messy. It wouldn’t be proper propaganda at all. They need to massage the words so that the come out “just so.” The minutes are designed to soothe you into thinking there’s no need to panic. All is well. The omnipotent Fed has everything under control. As the world goes crazy around you, you merely need to stay focused on the soothing words. “All is well. We know exactly what we are doing.”

It’s all so silly.

Since the Fed professes that it wants to be “transparent,” why doesn’t it just release the full meeting transcripts right after the FOMC dog and pony show? And why, exactly, has no one in Big Media pressed the Fed on that?

The answer that it is a show and Big Media is part of it. The Fed doesn’t want to be transparent at all. It wants to manipulate the markets, not just you and me, but the big macro players who dominate trading. Big Media plays along with that. It hones and tweaks (and sometimes twists) the message which the Fed carefully attempts to craft for what it wants you to think, while not telling you what it really thinks. The BM is out in Jackson’s Hole right now, disseminating The Word of The Fed. The Wall Street Journal’s Jon Hilsenrath and his corps of Fed access queens has been hard at work, pumping out the official message.

Regarding the minutes, the key issue is not what the Fed thinks about the economy, which even Big Media has been reporting they never get right. There are two key issues. One is whether they admit to thinking about shrinking the balance sheet. The other is whether they discuss how they will actually get money rates to move higher when there’s such a gargantuan oversupply of cash in the banks. If we see discussions of those issues, it tells us that at least they are thinking about them.

In June they weren’t mentioned at all. That changed in July. The first few paragraphs of the minutes addressed these issues. Big Media mostly ignored that, instead focusing on the meaningless discussion of what the members and staff thought of the economy. But the Fed started the minutes with this, so it clearly wanted their media minions to pay attention.

Not a shred of evidence was presented in support of that, mainly because there is no evidence to support that. The Fed wants you to think that by raising the interest it pays the banks that somehow that will make them want to charge their customers more. The Fed will pay the banks more income, in effect a bigger subsidy, lowering their cost of funds, and that will somehow make the banks charge their customers more?

Without reducing the supply of funds in the system, I see little chance of that, and increasing the amount of overnight or even term RRPs won’t do that. They are all short term cash assets to the banks, virtually the same as their reserve deposits at the Fed. It’s just a different form of deposit.

Next the minutes reported a discussion about synchronizing the timing of rate policy announcements with changes in RRP rates. Woop de doo. Meaningless.

Next they got to the really important stuff.

In the Policy Normalization Principles and Plans adopted at its September 16-17, 2014 meeting, the Committee indicated that it expects to cease or commence phasing out reinvestments of principal on securities held in the SOMA after it begins increasing the target range for the federal funds rate; the timing of this decision will depend on how economic and financial conditions and the economic outlook evolve. A staff briefing at this meeting provided background on alternative strategies the Committee could employ with respect to reinvestments.

Last September they proposed to shrink the balance sheet after beginning to raise rates, which is a form of putting the cart before the horse. I believe that they’ll find, if and when they try to raise rates, that the market won’t cooperate. Rates should only begin to rise when the actually shrink the balance sheet, thereby reducing the amount of excess cash in the banks, although how much shrinkage will be needed to sustain even minimally higher rates can’t be known.

These strategies included either characterizing qualitatively or specifying numerically the economic conditions under which reinvestments would cease, or establishing a date or time interval following the initial firming of the federal funds rate for the new policy on reinvestments to begin. The briefing also noted that the Committee could phase out reinvestments gradually or end reinvestments all at once.

In their discussion, most participants expressed a preference that the timing of the cessation of reinvestments be based on a qualitative assessment of economic conditions and the outlook.

Here we go again with the nebulous, non committal process of making decisions on the basis of, “It depends.” That allows them to continue to move the goalposts away from whatever the current conditions are, just as they have been for the past couple of years.

Then they reiterated their stance of wanting the cart to pull the horse.

Then they indicated that there was an argument about at what pace and in what mix to end the reinvestment of principal on Treasury and MBS securities. It was pointless… as was perhaps the entire discussion. It’s clear from the standards that they have selected as a basis for decision making that they remain on a path of deciding not to decide.

By putting the discussion of the mechanics of raising rates and shrinking the balance sheet first the Fed clearly wanted to focus attention on it. But Big Media ignored all of it, proving that the Fed can’t even control the message. The Fed’s BM access queens are an unruly mob after all. Instead the Fed’s minions focused on the part of the minutes devoted to the meaningless discussion of what the members and staff thought of the economy, the movable goal posts of policy making. If the Fed can’t even control its message in the media, how can it hope to influence the securities markets, the money markets, and the US economy?

If the Fed has little control over the message or the policy response of the markets and economy, trying to anticipate when the Fed will actually will act, or under what conditions, is a fool’s game. They obviously don’t know, and the market can’t know and won’t react in advance because, contrary to what Wall Street and its Big Media information ministry want you to believe, the market is not a discounting mechanism and can’t predict the future.

As the data in this report clearly shows, and has shown for years, the markets react to actual changes in liquidity. They do not predict them. It may appear that way to some but that’s a figment of the collective imagination. Trying to predict the Fed’s next move, and on a second or third order, what the market’s reactions will be on that basis, is just not a productive pursuit. The stock market’s price level is a measure of liquidity and the direction of the trend of liquidity, nothing more, and nothing less. 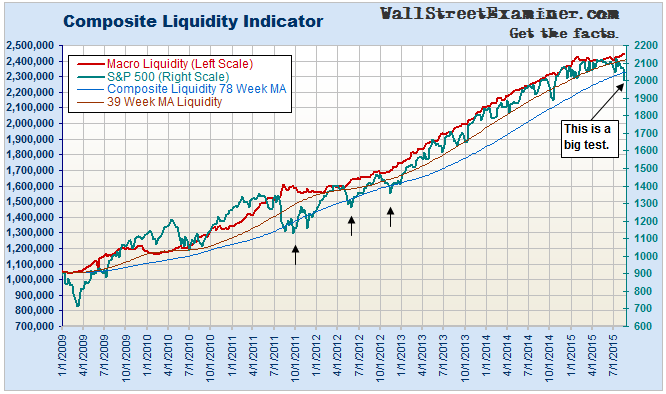 You can now subscribe to these reports as part of the Macroliquidity Pro Trader Weekly or Macroliquidity Investor Monthly on a standalone monthly or weekly basis.