Fitch Warns Of “Historic Junk Milestone” As US Defaults Surge

Despite the rear-view-mirror-gazing optimists proclamations that default rates have been low (which matters not one jot when pricing the future expectations of default into corporate bond cashflows), Fitch just released its forecast for 2016 defaults and notes that more than $5.5 billion of December defaults has increased the trailing 12-month default rate to 3.3% from 3% at the end of November, marking the 13th consecutive month that defaulted volume exceeded $1.5 billion, closing in on the 14-month run seen in 2008-2009.

Corporate spreads for ‘CCC’ credits exceeded 1,600 bps on Friday for the first time since summer 2009.Energy and metals/mining compose $84 billion of the ‘CCC’ rating category. Spotty capital markets access for these companies has led to decreased issuance, and pricing suggests distress will continue.  Of ‘CCC’ rated energy and metals/mining companies, 88% are bid below 80 cents.

Distressed debt exchanges (DDEs) accounted for 44% of defaults on an issuer-count basis in the past year. Energy companies have relied on DDEs to improve their capital structure and buy time as liquidity and cash flows are affected by low oil prices. Several companies including SandRidge Energy, Halcon Resources, Warren Resources and Exco Resources have completed multiple DDEs.

Fitch Ratings forecasts the 2016 US high yield bond default rate at 4.5% as weak prices will continue to challenge energy and metals/mining issuers. The energy sector default rate is projected to hit 11% in 2016, eclipsing the 9.7% rate seen in 1999.

A 4.5% 2016 high yield default rate equates to $66 billion of defaults and would be the fourth highest default total since 2000.

While Moody’s 2016 default forecast is 3.8%, and Fitch now forecasts 4.5% but the relationship with the ratio of money-losing firms now suggests something much higher, and we watch that outcome as a risk. 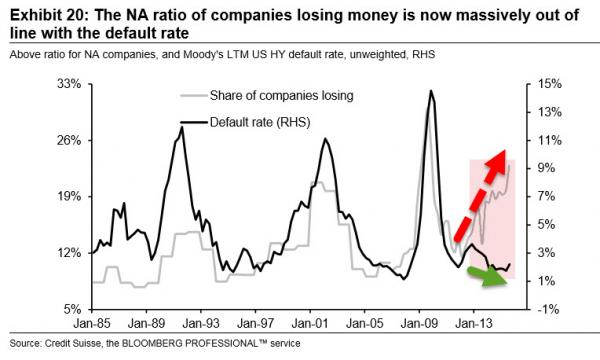 This is not a forecast, but an observation and a watching point. With the ECB now apparently less friendly as we examine below, we become more cautious ahead of the presumed Fed hike on 16 December, particularly in terms of total return dynamics.

Ironically, if defaults were to rise to anything like the degree this analysis suggests, it might abort the Fed hiking cycle which is a source of concern for the credit market. But we would hardly take this as a reassuring outcome.

There is a theme at present that credit is leading other markets, and is predicting “recession.” We are worried…