Florida Obamacare Blues: Rates To Soar By 17.6% Next Year

The nonprofit Blue Cross and Blue Shield affiliate blames higher health costs that are a result of attracting older adults this year who previously lacked coverage and are using more services than expected.

Florida insurance regulators plan to release rate information for all companies next week. The exchange plans cover individuals who are not covered by employer-based policies.

Florida Blue offers many plans. The 40 percent of its individual policyholders who chose “narrow network” plans called BlueSelect — which limit coverage to fewer doctors and hospitals — will see rates rise by an average of 13 percent.

Critics of the health law have predicted big rate hikes in the second year of the online marketplaces. Florida Blue CEO Patrick Geraghty noted that premiums in the individual market have been going up for years. “In the individual market, this type of average rate increase is typical,” he told Kaiser Health News. “It is not aberrant.”

Florida Blue signed up 339,000 customers through the Affordable Care Act’s federal marketplace this year — about 34 percent of the almost 1 million who enrolled in the state, the company said. Florida does not operate its own exchange.

Several factors related to the health law are driving up rates for next year, Geraghty said, including a paucity of younger and healthy enrollees and a greater-than-expected surge of people seeking expensive health services. The law prohibits insurers from rejecting people with health problems or charging them higher premiums. That meant that many unhealthy people who had not been able to get coverage before were able to obtain policies in 2014.

“No one can claim in good conscience that a 10-percent rate increase or more would signal the advent of something new and unprecedented,” said Greg Mellowe, policy director of the consumer group Florida CHAIN. “For years, this was standard practice in Florida.”

No need to worry. This is nothing new or unprecedented. Rates have been going up 10 percent a year, as “standard practice“. 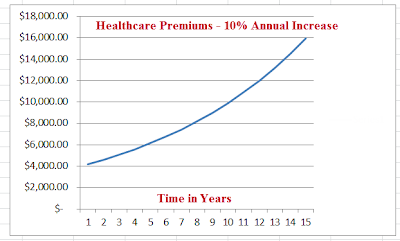 The above chart appears shocking, but there is absolutely nothing to fear.

As we all know, deficits don’t matter and besides, Obamacare will pick up the tab. If the tab grows unexpectedly, we can tax the rich and the poor, and the young and the old (especially the young who we already make overpay for insurance). And if that doesn’t work, the Fed can simply print the money.

The fallback options are so enormous, one can only wonder why healthcare is not free to everyone on the planet.