Foreigners Dump $154 Billion Of US Securities In June: The Tenuous Market For Uncle Sam’s Debt

The Treasury Department cobbles together data it receives from financial institutions on capital flows in and out of the US. It’s trying to figure out which foreign entity owns what US financial assets. Then on a monthly basis, it issues its Treasury International Capital (TIC) report. And this time, the report for June – released on Friday when everyone was on vacation or getting ready to head out of town for the weekend, and when no one was paying attention – was a zinger: US net capital outflows soared to $153.5 billion, the largest ever recorded.

So who the heck did all the selling?

Nope, it was not the category of “major foreign holders of Treasury Securities” that did the wholesale dumping. Given the crappy yields, they had all the reasons in the world to sell Treasuries. But they were adding to their positions. While there were some ups and downs, the grand total of Treasuries owned by these “major foreign holders” rose by $37 billion from May, to $6.013 trillion. The most ever. Since June last year, the amount that the US government is in hock to overseas entities has jumped by $418 billion.

And this is what Belgium’s mysterious buying binge looks like: 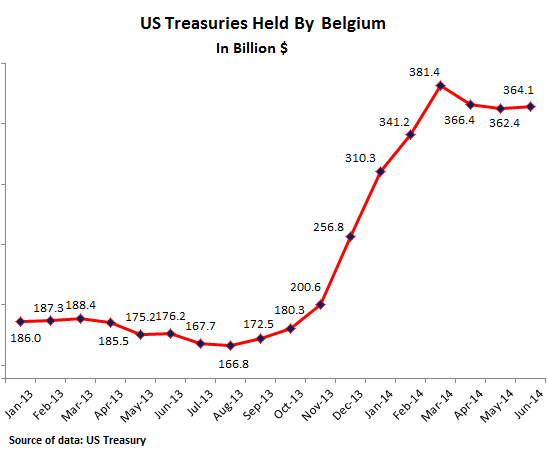 Who else was buying the flood of Treasuries inundating the “market?” And a flood it was. Despite the dizzying, nay, breathtaking improvements in the deficit that are being bandied about incessantly, the US gross national debt jumped by $864 billion over the 12-month period of the TIC report, from July 1, 2013, through June 30, 2014.

But only two entities bought this new debt:

Foreigners added $418 billion in Treasuries to their holdings over that period – so nearly half of the new debt. Who bought the remaining $446 billion?

The Fed. During that period, it piled an additional $464 billion in Treasuries on its balance sheet.

So the two remaining net buyers, the only two forces left standing to buy US government debt, were foreign countries and the Fed. Their combined holdings of Treasuries soared by $882 billion – $18 billion more than the Treasury issued. The rest of the world, that is US and global investors, were net sellers of US Treasuries.

And what happens as the Fed tapers its Treasury purchases out of existence? Who’s going to buy its share? As one of my mentors used to say: Isn’t that an interesting question?

There is a caveat however. And it makes the situation even worse. China is notoriously opaque about its financial transactions. The Treasury doesn’t actually know what China is doing and is just guessing. Every US Secretary of the Treasury has to traipse to China and ask them to be more open about their transactions and holdings, and also – please, please, regardless of the spats we might have – continue buying US debt. These begging missions are a big part of the job.

So Treasury Secretary Jacob Lew, after a two-day high-level powwow in Beijing a month ago, announced that China would “adopt greater transparency including on foreign exchange.” The hope was that it would “accelerate the move to a more market-based exchange rate.” Whatever. It was designed for American consumption. The Chinese offered their usual less than tepid commitment perforated with big loopholes.

But that explains only Treasuries. It doesn’t explain why foreigners went on a rampage in June, dumping other US financial assets. Even official investors bought only a net of $3.4 billion in US financial assets, having splurged on Treasuries and soured on other assets. And private investors? They unceremoniously dumped $156.9 billion.

Data on these transactions are notoriously volatile. But in March foreign investors had already unloaded a net of $123 billion. For the 12 months through June, foreigners bought only a net of $95 billion, including as we’ve seen, $418 billion in Treasuries. Thus they’d dumped a net of $323 billion in other securities.

Who are these private investors that are dumping American securities?

As much as we’d like, there is no list of names in the TIC data. Actual buyers and sellers remain anonymous or unknown. But we can imagine the shrewdest trader of them all. Here he is, trying to save his reportedly vast personal wealth by tapping the sell button for US securities again and again in between his international and domestic entanglements, while CNBC preaches buy, buy, buy (cartoon by Merk Investments, with permission): 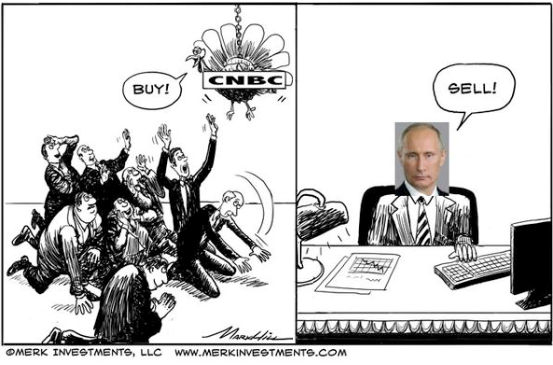 That’s what makes a market. In the left part of the cartoon, we see how part of the game is being played. It has been honed to perfection. Everyone is playing along. And it performs miracles. Or it did. Because just now, it inexplicably conked out. Read…. The Wall Street Hype Machine Suddenly Breaks Down